Because it is the range highpoint and has a trail to the top, Wyoming Peak is fairly popular as Wyoming Range peaks go, which is to say it might see a few climbers each week in the summer. The mountains out here are simply too remote to attract anything resembling crowds.

So you might think Mount Coffin, the next peak north (and less than a mile away at that) and quite a striking one at that, might entice a lot of the Wyoming Peak visitors over, but that does not seem to be the case. Perhaps its south ridge appears too intimidating to the average hiker, perhaps Wyoming Peak is enough for most people, or perhaps it is due to a lack of a sense of adventure or imagination. (Confession-- my first time out here, I was guilty of the second.) When I once googled for information about the peak, the best thing I found was one meager trip report (literally just a few sentences) about an aborted climb. The writer mentioned choosing to turn around in order to beat nightfall; I could not tell if he was climbing the same route I did, but pictures suggested he was. Other than that, all I found were some photos, including one of my own, and some useless statistical information on a couple list-type sites.

Such a shame, sort of. The peak is not as difficult as it looks, the views are great (extending all the way to the Winds, the Gros Ventres, and the Tetons), and although spending time in the Wyoming Range is highly unlikely to leave one starving to escape the masses, anyone putting a premium on solitude is almost guaranteed of having this summit to himself or herself.

I have no idea how the mountain got its name. There is a Coffin Butte in the Absaroka Range, also in the Greater Yellowstone Ecosystem, so maybe there was someone with that name important in regional history. Or maybe someone thought the long, flat summit resembled a coffin. If anyone knows, I’ll be happy to know in turn.

Anyone wanting to climb this peak should consider extending the outing to include Wyoming Peak, Mount Coffin, and Mt. March Madness. All three are close together and make up the three highest peaks in the Wyoming Range.

First-time visitors to this area will probably want to, and probably should, climb Wyoming Peak as well. Others may wish to skip Wyoming Peak this time around. It is easy to do either.

From the trailhead at about 8720’, the trail at first climbs steeply but then moderates as it follows a few long switchbacks to a saddle at almost 11,000’. In Thomas Turiano’s Select Peaks of Greater Yellowstone, the author says it is four miles to Wyoming Peak, but it is really four miles to this saddle, which is about half a mile south of Wyoming Peak. This saddle is between Wyoming Peak (north) and Mt. March Madness (south).

Go up to the summit and its ruined lookout and then hike north down to a saddle a little over 10,800’, or traverse on a game or climber’s trail along the west side of Wyoming Peak until you reach the same saddle. If you don’t see the trail, don’t worry; the way is still obvious and technically easy, though the footing can be a bit loose. 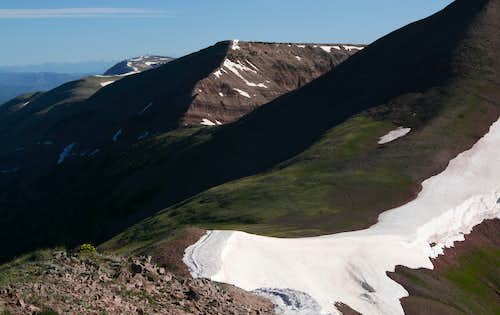 Now head up the ridge to the summit. From the main trail, outcrops that looked like potential problems turn out to be easily scrambled over or bypassed. I encountered nothing harder than Class 3 conditions and feel I made it that way for the sake of additional enjoyment. 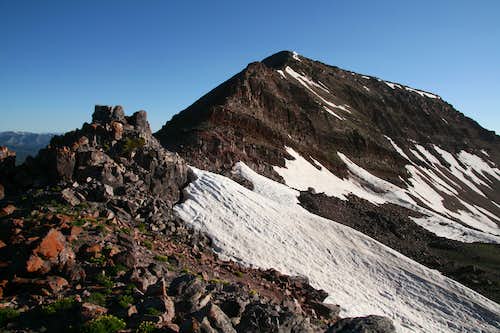 The distance from the saddle south of Wyoming Peak to the summit of Mount Coffin, not including an ascent of Wyoming Peak, is one mile, making the total one-way distance five miles, with a vertical climb of approximately 2500’, really not that much to ask for such a remote, scenic mountain.

As far as I could tell, the summit had no cairn or register, but a large snowbank up there could have been covering one or both. Before you put one up on this wild peak, please ask yourself why it’s necessary when no one else has seemed to think so before. Just as some would consider it poor etiquette to dismantle am existing summit cairn or remove a register, consider that some would consider it equally bad etiquette to establsh either or both where they don't already exist. 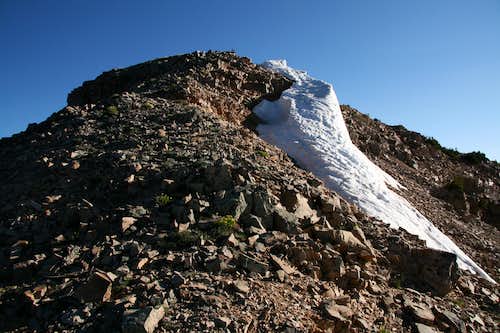 There is also a trail approach from the east. Maps show the trail reaching the north side of Wyoming Peak above the Coffin-Wyoming saddle mentioned in my route description. I have never gone that way, but I know the trailhead is higher by about 140’, the approach to the saddle is about a mile longer, and that the trail can be hard to find and follow in places. 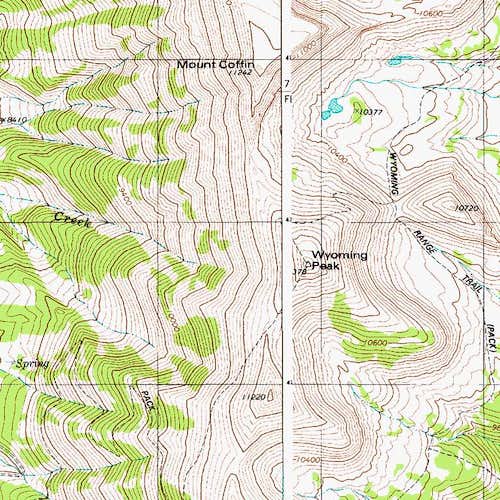 From the north: Leave Alpine and drive south on the spectacular Greys River Road, a dusty, unpaved road suitable for most passenger cars, 54.7 miles (remember that odometers can vary slightly) to Shale Creek Road (FR 10126). I seem to recall a sign being there in 2004, but there was no sign in 2010. Well, there is a sign, but it is just a post with an arrow design on it, marking a vehicle route. Just a tenth of a mile along Shale Creek Road, however, there is a sign indicating Shale Creek.

As you drive south, the intersection with Shale Creek Road is just after a bridge crossing that puts the Greys River on your left.

Drive this road for 3.7 miles to the trailhead, which is at a sharp bend where a steep drainage meets the road. There is a sign for the trail.

Maps mark Shale Creek Road as a high-clearance/4wd road. When the road is dry, a careful driver can manage the road in most any passenger car. There is one “bad” section, a heavily rutted stretch worn that way by ATV users, but as of the writing of this page, it seemed manageable for most low-clearance vehicles.

From the south: You will need to get to Tri Basin Divide, which I have done from Big Piney (about 40 miles), La Barge (45 miles), and U.S. 89 (24 miles), as well as from Alpine. On the approaches from Big Piney and La Barge, the road can be quite rough before it enters national forest land.

From the east: I have never gone this way, but it is supposed to be 26 miles from Big Piney to the east-side trailhead at Middle Piney Lake. For precise directions, see the Turiano guide or use these directions by SP member streeyyr: “From Big Piney, drive west on Wyoming 350 for 11 miles. The road then turns to dirt. Continue west on the good dirt road, now known as the Middle Piney Road No. 111. Drive about 11 more miles west to a summer camp, then turn left onto Forest Road 10024. Drive about three miles west until the road ends at the scenic Middle Piney Lake. The last two miles of the road past Sacajawea Campground are narrow and winding.”

There are several campgrounds along Greys River Road and the forest roads approaching Tri Basin Divide, and there are campgrounds along the Big Piney Lake (east side) approach. The trailhead for Wyoming Peak is a nice spot to camp for the night, with great views west of the Salt River Range. Dispersed camping is possible just about anywhere out here.