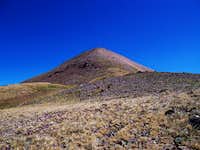 The Wyoming Range, one of the most remote of Wyoming's major mountain ranges, is part of the Greater Yellowstone Ecosystem and is an important wildlife habitat. Because paved roads do not penetrate the range and because the range is isolated from the Grand Teton-Yellowstone area that attracts most of the attention in the region, human visitation is relatively light.

A climb of Wyoming Peak and of virtually any other peak in the range is a delightful excursion into a realm of rugged beauty and far-ranging vistas of mountains and semiarid basins. Views from the summit include Gannett Peak, Wyoming's highest mountain, and the Grand Teton, Wyoming's most famous.

Located in west-central Wyoming about 30 miles west of Big Piney, Wyoming Peak is the highpoint of the Wyoming Range. This impressive mountain is the highest point in Lincoln County and is located in the Bridger-Teton National Forest; it is also the seventh-highest range highpoint in Wyoming.

"Gracing" the summit is a ruined fire lookout that is visible from nearby peaks and from the valleys below, somewhat spoiling the aesthetic appeal of the peak. Don't let that spoil your interest in the peak, though. In addition to having outstanding views, Wyoming Peak is the central summit in a cluster of the range's three highest peaks; Mount Coffin-- #2-- is about a mile north, and "Mount March Madness"-- #3-- is about half a mile south. Given good weather, it is both easy and rewarding to climb all three in a day. Coffin is Class 2 with some possible touches of Class 3, and March Madness is Class 2. There are SP pages for both of these peaks.

Hiking trails approach and reach the summit from both the east and the west. The eastern route is a little longer than the western one (10 miles vs. 9 miles RT) but also has a little less elevation gain. Detailed route pages are attached to this one.

To approach from the east-- From Big Piney, drive west on Wyoming 350 for 11 miles. The road then turns to dirt. Continue west on the good dirt road, now known as the Middle Piney Road No. 111. Drive about 11 more miles west to a summer camp, then turn left onto Forest Road 10024. Drive about three miles west until the road ends at the scenic Middle Piney Lake. The last two miles of the road past Sacajawea Campground are narrow and winding.

To approach from the west-- The route up the peak from the west is shorter, but the approach is longer and requires more driving on unpaved roads. That approach is, though, incredibly scenic. From the town of Alpine, follow Greys River Road south for over 50 miles to Shale Creek Road and turn onto that road, which leads to the trailhead after about 5 miles.

There was no sign at the Greys/Shale intersection in 2010, but the turnoff, as you head south, is just after a bridged crossing of Greys River. After a very short distance along Shale Creek, there is a sign identifying it.

Shale Creek Road is marked as a 4wd road, but neither that nor high clearance is necessary if one drives carefully in dry conditions. Remember, though, that the tires on regular cars will not be as up to the beating they will take on the long drive from Alpine as the tires on trucks and SUV's will be.

One can also approach from the south via Tri-Basin Divide, which itself can be accessed from the west, south, and east via dirt roads.  Another option is using McDougal Gap, which is approached from the east via good unpaved roads.  The road over McDougal Gap drops the meet Greys River Road several miles north of Shale Creek. 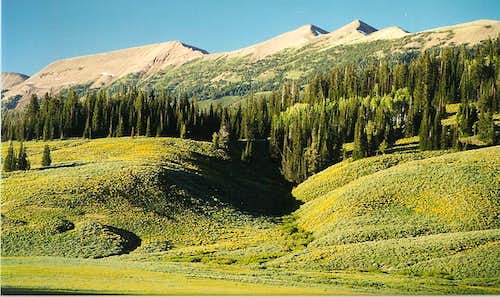 Contact the Big Piney Ranger District at 307-276-3375 for the latest conditions.

West side-- There are some campgrounds along Greys River Road, and dispersed camping is available almost everywhere.

The hike from Middle Piney Lake will involve a full day’s hike and much of the accent is full of heavy breathing. From Middle Piney, follow the trail along the South side of the lake, then past the lake as it crosses over to the North side of the valley and past Wahelo Falls. Soon after the falls you take a right at the fork in the trail and pretty much climb straight up to the Wyoming Range National Recreational Trail. Take a right to follow the range trail northward. The old observation building atop Wyoming Peak is by then visible, but the trail circles around the mountain to the Northeast side and through Fireball Valley. Once you reach the “saddle” on the rim of Fireball, you descend into the next valley while the Wyoming Range trail veers North (to the right) and the trail to Wyoming Peak (high above on the left) disappears. You have to make your own trail up to the saddle between Wyoming Peak and Mt. Coffin and then an easy Alpine lung-busting sprint to the top of the Wyoming Range.