Running for almost eighty miles north-south near the edge of west-central Wyoming, the parallel Salt River (west) and Wyoming (east) Ranges make a long, remote alpine tail of the Greater Yellowstone Ecosystem. They are the least-visited of the Yellowstone region’s mountains, but locals and smart visitors know that these gems have just about everything that the famous ranges do and some things that they sometimes sorely lack--- peace and quiet that don’t require epic backpacking to attain. Hiking, climbing, horseback riding, whitewater rafting, hunting, and fishing opportunities attract outdoor enthusiasts of all different types. And did I mention how quiet and peaceful it is out here?

Natural History and Other Geological Information 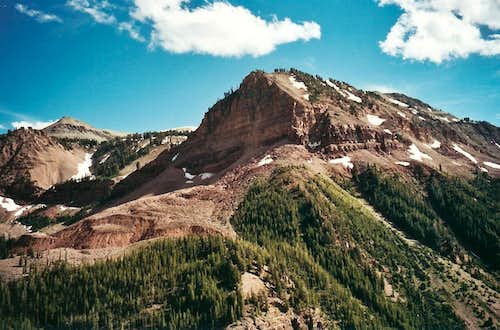 The range is part of what is called the Overthrust Belt in western Wyoming. Millions of years ago, the land was pushed eastward so that it “crumpled” in parallel configurations. Hence, this range.

This formation consists of a long succession of sedimentary peaks and ridges, but its summits are red, not grayish, and they are often flat-topped. The slopes, when they are not forebodingly steep cliffs, feature great stands of lodgepole pines and some aspens. Atop the range, though, hikers are rewarded with rolling subalpine meadows and generally easy Class 2 strolls to high summits that, from below, look impossible to reach. Running along or near the crest of the range is the wonderful Wyoming Range National Recreation Trail. The Wyoming Range tops out at 11,363’, the highest point in the Salt River/Wyoming Ranges system. 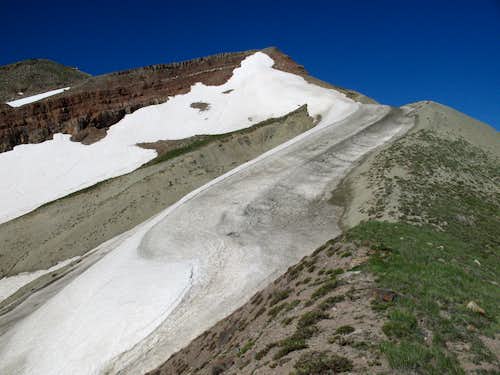 Because of its ruggedness, remoteness, and sheer beauty, the Wyoming Range has a special place in my heart, with the Wyoming Absarokas and Montana's Rocky Mountain Front, as my favorite mountain wilderness in the Lower 48. The first time I saw the Wyoming Range, I had to wonder if I was in Arizona or Utah instead of Wyoming. It was late in the afternoon, and the steep red cliffs towering above lodgepole pines and flower-filled meadows made me think someone had planted a piece of the Southwest right down in classic Wyoming country.

The range is thick with black bears, elk, moose, and mule deer. Fishing is fair to good in the area’s lakes and streams. You may encounter bighorn sheep, too. Domestic sheep are also present in the summer, as are “slow elk”--- cows. Watch where you step when you hike through the meadows.

Grizzly bears have not "officially" expanded their range to include these mountains, but locals have reported some sightings, and a grizzly was reportedly shot in the Wyoming Range in recent years. Visitors may wish to carry pepper spray and would be wise to review proper grizzly-country etiquette before venturing out. 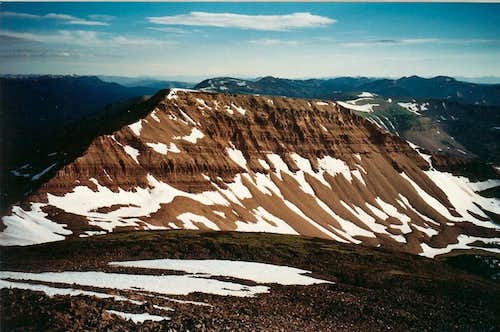 Listing all means of access to this vast area would be quite a task, but I will discuss some major spots.

From the east, leave U.S. 191 east of Bondurant and turn south on Upper Hoback Road (FR 30700). A good gravel road leads to a trailhead from which you can hike a primitive trail called Upper Hoback into the eastern reaches of the Wyoming Range. This road is also the way to access the route on Hoback Peak that Thomas Turiano describes in Select Peaks of the Greater Yellowstone.

The Greys River Road, west of the range's spectacular western side, is an adventure in itself and provides access to both ranges. There are several trailheads that access the Wyoming Range National Scenic Trail and some of the highest peaks in the range. Please read the next section for a more detailed account of this spectacular mountain journey.

Wyoming Range
Start in Alpine, Wyoming, and head south on the Greys River Road. This road is a little rough and bumpy in places, but you can travel it with almost any passenger car. In good weather, this road gives wild scenery and a remote feel that only the truly dead of heart will fail to appreciate.

It is about 60 miles from Alpine to Tri-Basin Divide, a few feet north of which the Greys River begins as a trickle in some gorgeous meadows. Look for the sign saying “Greys River--- Watch Me Grow” and reflect on how the river has changed since you left Alpine (or, if you’re heading the other way, get yourself ready). At the divide, falling (and melting) water runs to the Colorado River, the Columbia River, or into the Great Basin. Tri-Basin Divide is also where the road splits three ways--- south, east, and west--- and leads to other fine Wyoming destinations. Along the way there, you get to enjoy what I like to think of as the "real" Wyoming-- classic mountain country with canyons, meadows, wildlife, rugged peaks, and no crowds. This country is so big, beautiful, and remote that you will feel as though you are on safari in some undiscovered territory despite the fact that you're on a signed road.

The first few miles of the road take you through a dramatic rapids-filled canyon. Then the scenery opens up as you travel well above wildflower meadows and the river's east banks while pyramid-like peaks of the Salt River Range compete for your attention. Watch for cattle, but watch for moose, too, and look out for the ground squirrels-- they deserve a break (and brake), too.

As trees begin to block your views of the Salt River Range and the road gets a little rougher, the Wyoming Range comes into view. Some particularly beautiful areas are around Box Canyon Creek, where a great trail accesses the crest of the range, and Poison Meadows, where there are stunning meadows of gold and purple in July. All the while, take time to enjoy the changing faces of the Greys River. The side trip to McDougal Gap does not take long and is worth the time.

You can approach Tri-Basin Divide from La Barge or from U.S. 89, too. There is also a way from the Pinedale area by heading over McDougal Gap, but I have not been that way yet and cannot describe it. The way from 89 is nicer and easier than the La Barge way, but it is still nowhere near as scenic as the Greys Riverway.

Controversy, and Salvation (for now)

Mining and other extractive uses have occurred out here before, and there are new pressures for them to begin again or increase from current levels.

It is not my intent to delve into politics here but to provide a factual account of some issues facing this region. As a political independent, I often see and respect both sides of contentious issues. Here, I admit the benefits of job creation and satisfying our energy needs that extractive uses bring, but I also see how our short-term wants negatively impact the long-term good for both the ecosystem and ourselves. I offer no prescription here; this is not the forum for it.

Fact-- wisely or unwisely, the Bush administration pushed for expanded energy exploration on federally owned lands in the West, and a great deal of that push occurred in Wyoming’s Upper Green River Basin and the Salt River/Wyoming Ranges. Previously, those that know about these things decreed that the mineral reserves out here were not substantial or accessible enough to make profitable ventures, and the region seemed spared. But a more industry-friendly administration, reliance on foreign oil, high gasoline prices, and new technology put renewed attention on the energy potential stored in these parts of Wyoming.

Not surprisingly, numerous locals opposed many, most, or even all of these proposed projects. And these were not your stereotypical tree-hugger types who seem more like irresponsible kids than thoughtful adults-- they were conservatives and Republicans who saw their way of life, and their hunting and fishing, threatened. Even late Wyoming Senator Craig Thomas (R) came out against some of these plans, showing that the issues were less about partisan politics and more about values and priorities.

In May 2009, though, President Barack Obama signed the Omnibus Public Land Management Act, which added or created wilderness protection in many areas in many states, including the Wyoming Range. For now, at least, 1.2 million acres are protected from oil and gas development. 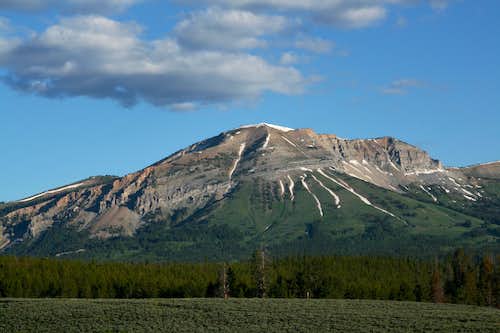 There is not too much trail maintenance or signage out here. Know what you are doing before you venture out into these mountains.

Hunting is popular in the fall--- hikers and climbers might want to stay away at those times. Most hunters and some hikers are very responsible, but there are accidents every year all over the country.

The Greys River Road is unplowed in winter.

There are several Forest Service campgrounds along the Greys River Road. They are primitive sites (no water, no flush toilets). Fees for them, if any, would be small. Dispersed camping opportunities are delightful and virtually limitless.

The town of Alpine provides all services. Other "gateway" towns include Big Piney and La Barge, which have full services but a more limited selection than Alpine does.

Most of the area lies within the Bridger-Teton National Forest, and contacting that agency for a map would be a good idea. The forest map will not show the topography, but it will identify the USGS quads you should have for hikes and climbs out here. Alternatively, get DeLorme’s Wyoming Atlas and Gazetteer, which does show topography and has the added benefit of covering the entire state; it is not, however, suitable as a hiking map.

Falcon Publishing has Hiking Wyoming, which details a few good hikes in the range, and Wild Wyoming, which gives useful travel information, overviews, and trip suggestions but is not so good with trail descriptions and maps.

Thomas Turiano’s Select Peaks of Greater Yellowstone is the climbing Bible for the region, and it is available at Amazon.com. The book covers several Wyoming Range peaks not on SP, and it has extensive information about the region's natural and human history.