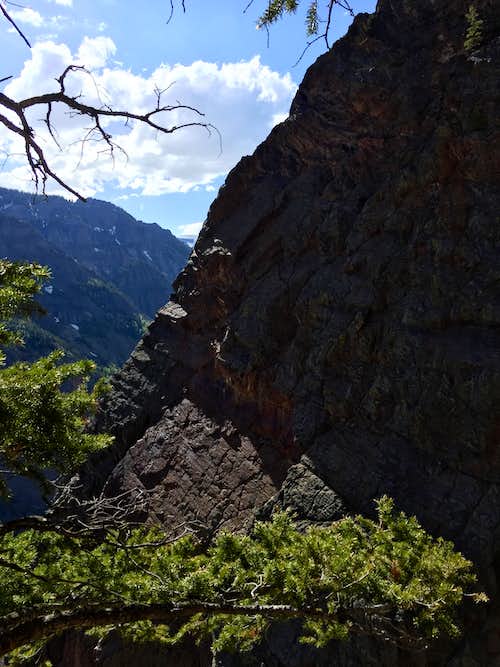 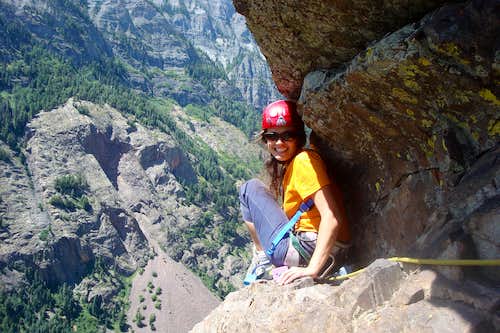 Lightline - under a small roof
Lightline is 5.6R is 1,200ft long (=364 meters) alpine climb located above the town of Ouray, just of Million Dollar Highway, in western Colorado. It is a nice and easy scramble/climb with amazing views. Local guide books give the route 4 stars. If you are looking for a relatively quick and easy rock climb in a high alpine setting, this may be one of the best routes in the area.
The route is south facing and gets plenty of sun. It can actually get very hot. It is good to keep in mind that during the monsoon season (afternoon thunderstorm) this is not a safe place to be. Start early to avoid lighting.
Beware that the routes have the potential of dislodging rocks onto either the parking area and/or the highway below - pay attention to your moves. Do not climb after another party. There are several routes on this wall, but Lighline is by far the most climbed route on this wall. The rock gets better the higher you go, but still is very loose at places.
Ouray is a great destination for any traveller, it is especially popular for ice climbers during the winter, and lately a lot of rock routes have been developed in the surrounding area.
Mountain Project has description of Lightline in alpine section, there are several guide books describing the climb available in Ouray Mountain Sports. 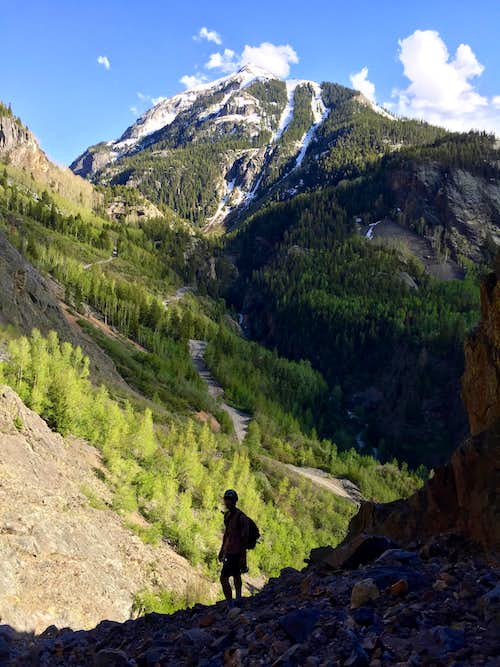 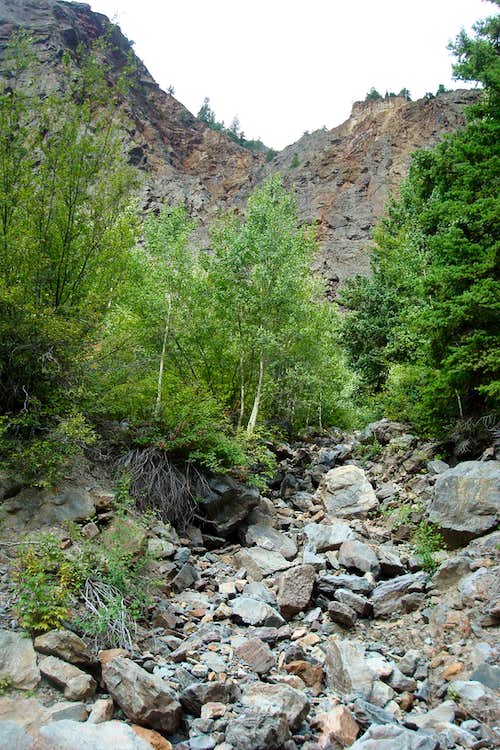 Approach gully - loose rock
Drive south on Hwy 550 from Ouray. After going through the tunnel, past Bear Creek and Horsetail falls, then park where the Engineer Pass and the Alpine Loop exit Hwy 550 on the left. Hike about 100 meters up the Engineer Pass road, and ascend a gully/drainage to the base of the climb. The turn off for Engineer Pass loop is very well marked. If you have a 4 WD high clearance vehicle you could possibly drive past the first big switch off and park at the base of the gully.

Approach to the climb: Start hiking the Engineer Pass road, after 2nd switchback take the first gully up - see the photo on the right. And continue scrambling up the gully until the beginning of the climb. The approach takes about 15 min. Do not continue past the rib into an orange gully on its right side (this is your descend). You can leave some stuff at the start of  your climb, carry your approach shoes with your since the descend involves some walking. 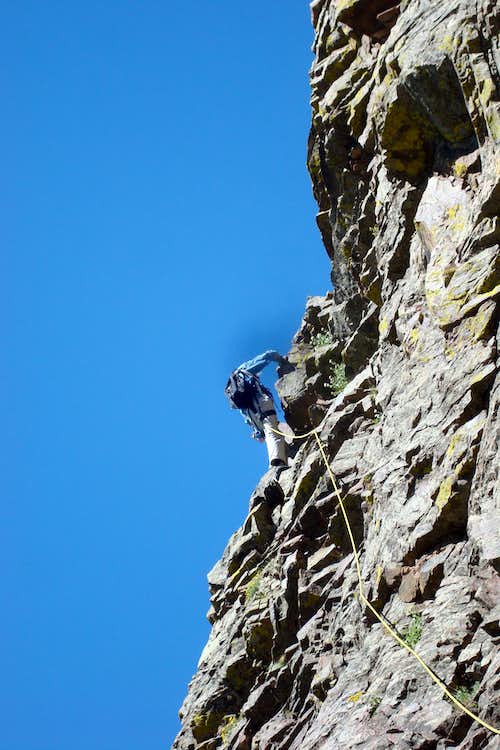 rock got better higher up 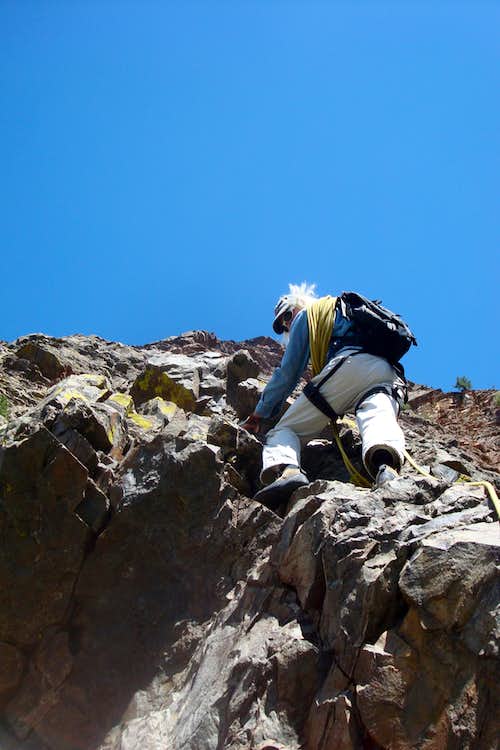 moving fast - experienced mountaineer
Mostly a ridge scrambling up a prominent arete. Many possible routes, expect some loose rock and a lot of easy climbing. Start just above the toe of the buttress on the right side, seems to be the best. Most parties will rope for a first few pitches until the upper slabs are reached and then continue climbing un-roped. Use your own judgement here.
San Juan Mountain guides supposedly use this route as their training for Matterhorn, and climb it with mountain boots. This route follows the prominent buttress from bottom up - plenty of possibilities to make it slightly easier or slightly more challenging.
There are a few 5.6 exposed moves, but most of the climb is more like a lower class 5. Remember, if climbing unroped, any fall here would be fatal. And as mentioned above, do not follow another party on this climb since the rock fall potential is very high.
2017 - I noticed brand new anchors along the route, passed 3 sets. I used those for climbing up, but not for the descent since it appeared you may need 2 ropes for the rappel down.
Descent: from the top of the buttress, descent to climber's right (east) into some trees. Follow a faint trail (there may be a trail, and there may be a cairn) to the top and around of the orange gully (early in the season with a small waterfall in it, later on dry). Go around the top of this gully to the bench/cliff edge from here you have a nice view of your climb. Descend to a large pine tree with slings around it. 1st rappel from a pine tree: 60 meters down to another tree, 2nd rappel again from a tree: 60 meters down to a rock anchors, 3rd rappel - 60 meters to another set of anchors below a slightly overhanging rock, not a comfortable place to stand around for a larger party, 4th rappel from rock anchors - 60 meters to the gully. Head slightly to climber's left, if going straight down, the gully is deeper and the rope may not reach.
Down climb/scramble down the gully to the mining tunnel with another fixed anchor. There used to be a fixed rope, removed (2017 only anchors), now you can either rappel a short steeper section of the gully, or you can down climb it as we did. Not too hard. Another 5-10 min scramble will bring you to the base of your climb.
One 60 meter rope is sufficient for the rappel.