A rugged subpeak of Corkscrew Peak, Little Corkscrew does not have the necessary prominence from its parent to qualify as a "real" peak, but it does have its own unofficial name and a register. While the higher peak is considered a desert classic, Little Corkscrew stands out because it is more challenging to climb due to its knife-edge, exposed summit ridge.
Experienced scramblers can combine this with Corkscrew Peak or make it a destination of its own.
From the top, one has excellent views that include an uncommonly seen aspect of Corkscrew Peak, the rugged Grapevine Mountains, the sand dunes of Mesquite Flat, the salt pan of Death Valley, Telescope Peak (highest point in Death Valley NP), and Mount Whitney. Reptile lovers should enjoy the sidewinders and the many lizards they are likely to encounter. Springtime climbers may find an abundance of different wildflowers.
In addition to the knife edge that runs from the saddle between the two peaks to the summit, the route also offers enjoyable variations from the easiest path that include Class 4 and 5 climbing up dryfalls and sharp, sticky volcanic rock. Take care on that rock!

The route begins off Daylight Pass Road. There are all kinds of ways to get to that road depending on the point of origin, so I'll leave it to you to find out how to get there.
Once on Daylight Pass Road, look for a sign pointing to Corkscrew Peak. This sign is between Daylight Pass and the intersection with the Beatty Cutoff. Some park by this sign, but a better place to park is a short distance west by a sign informing you that a kiosk for paying the entrance fee is ahead. Look for a use trail heading up the embankment; this will put you on the course for Corkscrew Peak and will shave a little time, distance, and effort.

RT distance: 5-6 mi
Elevation gain: about 2300'
Many seem to climb Little Corkscrew in tandem with Corkscrew. The ridge between the Corkscrew-Little Corkscrew saddle has one rugged-looking section, but it doesn't look too tough. However, I have not done that ridge; my son was more interesting in getting to the Racetrack that day than he was in climbing a second peak. So here is a route from the road to the summit:
If there is a consistently cairned route across the desert from the starting point, I haven't found it. Sometimes cairns are out there, and sometimes they aren't. Just keep in mind that your destination is the saddle between Little Corkscrew and Corkscrew, and follow your nose. As you reach the hills, you have to start making decisions, and it is better in general to bear left when there are forks. 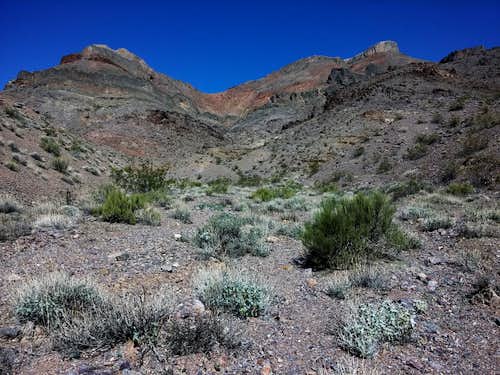 Little Corkscrew and Corkscrew Peak
Assuming you figure things out correctly, which isn't too terribly hard, you will find yourself in a wash that suddenly narrows and reaches a dryfall. It's class 4 up this dryfall, but you can bypass it on the right if you wish by backtracking to before the wash narrows. 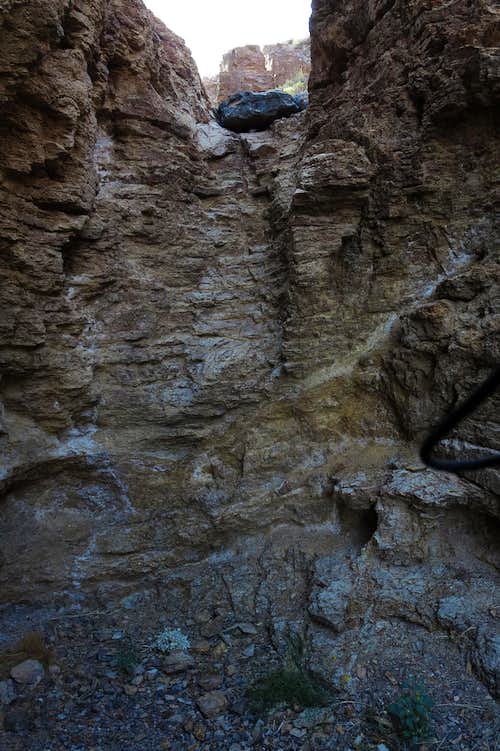 Dryfall
After this, there is another short dryfall. Following that, bear left and find cairns and/or a use trail trending toward the saddle you need to reach. There is a significant two-tiered dryfall that requires low Class 5 climbing, but it, too, can be bypassed (it is fun to climb, though). 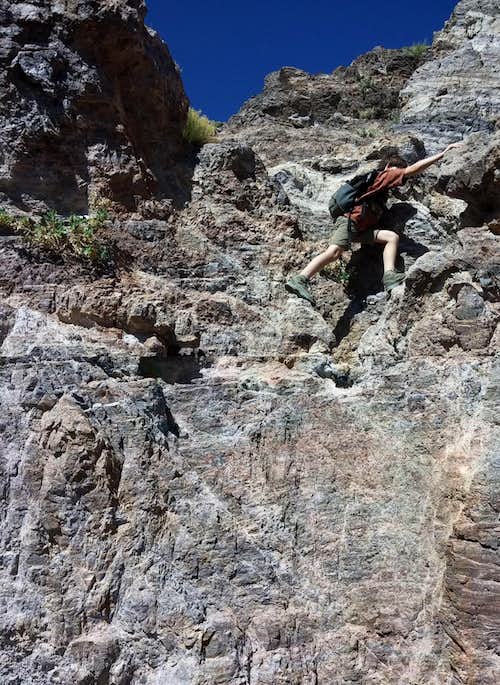 Negotiating the two-tiered dryfall
Keep using the path of least resistance up and aim for the steep, obvious use trail to the saddle. Note that this becomes a tedious hike up scree. If you tire of it, branch left to reach solid rock that will give you a Class 2/3 path to the summit ridge south of the saddle.
Whether from the saddle or from this alternate point, now tackle the knife-edge ridge to the summit. Sometimes it is possible to go along easier ground on the east side, but the ridge itself is good fun.
There are two outcrops that appear to be about the same height. Tag both if you're unsure. The register I found was on the southern outcrop, but it had been newly placed in January 2015, with my son and I the second party to sign, and I had read previously about a register on the summit. However, I did not check for one on the northern one.

Spring through fall. Death Valley is the hottest place in the world, with summer daytime highs often exceeding 120 F. On such a day, the summit of Corkscrew will still be around 100, and the area around the trailhead will be around 110. Unless you start out very early and are very fast, you are taking serious risks with heat exhaustion and heatstroke in such conditions. October through April are really the best months.

There are established camping areas in the valley itself, the largest and best developed being those at Furnace Creek and Stovepipe Wells.  During certain times of the year, youc an reserve sites at Furnace Creek. See recreation.gov for more details and to make reservations.
Backcountry camping is free and allowed without a permit. To be certain, though, since regulations do sometimes change, contact the park and ask, or check the backcountry camping page on the park website.

Death Valley weather. Obviously, mountain weather can be significantly different from that in the valley.