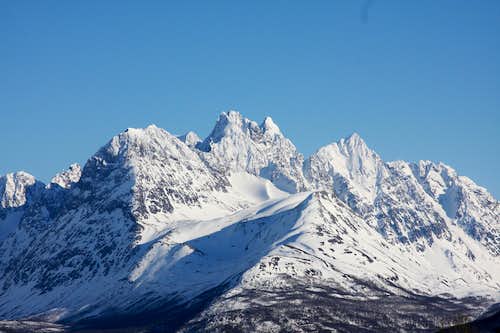 The Lyngen Alps are a compact range of peaks that begin close to the tri borders of Finland, Sweden, and Norway. Most of the peaks are part of a peninsula that runs on a North\South axis. The Lyngen Peninsula is bordered by Balsfjord to the west, Storfjord to the east, and the open ocean to the north. It is bisected in the center by a fjord called Kjosen, which nearly cuts the peninsula in half.

The mountains are comprised of metamorphic and sedimentary rock that is geologically complicated, and makes for loose and unstable rock conditions. The greatest appeal of the Lyngen alps to the traveling climber is the backcountry skiing. It's extreme latitude, weather, and steepness makes for remarkable downhill backcountry skiing for those willing to skin and climb. The proximity to the open ocean also creates ice climbing opprotunities. There are limited established trails, as well as many use paths that are easy to follow leading into the deep valleys between the peaks. Surprisingly good bouldering is found in some of the flat valley bottoms as large erratics are scattered about with nice soft sandy landings. Occasionally reports come out of decent rock climbing, and there are obviously plenty of good scrambling routes, so there is truly something for everyone except the sport climber. 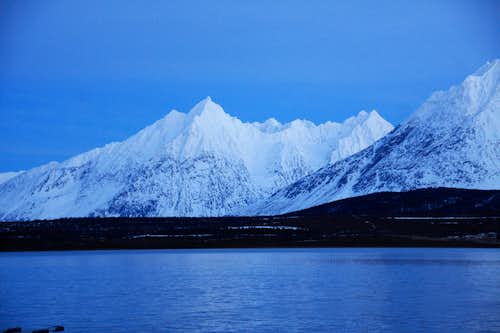 Blue Hour
Transportation is an issue in Lyngen. Some of the best ski routes can only be reached by boat, and it is recommended to go with a local guide. Links to two of the best known guide services:

If you really want to go in style, stay at the Lyngen Lodge. This is a land based lodge that is VERY popular. They have a fast boat to take you to the base of the route of choice.

Or you can stay on a boat that anchors at a new peak each morning:

If you are not looking for a package trip, but just need a local guide for a specific route these guys are the best (they wrote the guidebook too).
Midnight Sun Mountain Guides

If you want to do it yourself, there are more than enough routes to explore that are accesible by automobile.

A good resource to get you started:
Overview of Lyngen 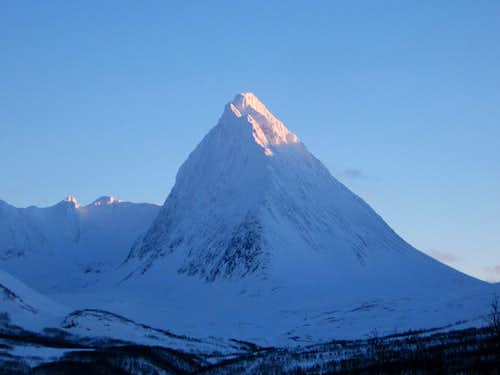 Piggtind, late January
Unique rules of camping in Norway apply. You cannot camp on cultivated land, or beside a permanent structure. That's it. The status of Lyngen is a nature reserve, an as such helicopter skiing is still not allowed, though a couple exceptions have been granted for filmakers, royalty, and their ilk.

Other sources and External links. 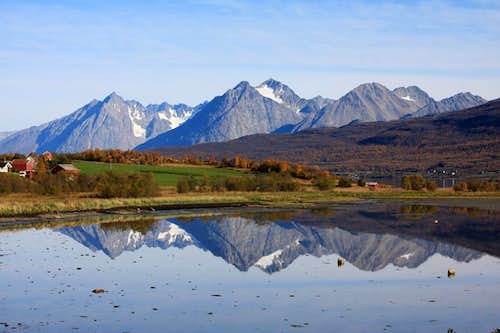 Lyngen Alps in the fall
Guidebook
Finally, published November 2010, a guidebook for ski mountaineering that includes Lyngen. A short description of each route is in English and all routes have excellent aerial shots with route overlays. Written by a local guide, this is the only published resource for climbing and skiing in Lyngen. Highly recommended.

Published in 2014, Jan Olsen's book is primarily photos, but has some descriptions of dayhikes in the area in English and Norwegian.


This website is run by a guy who is trying to climb every single peak in Lyngen and Tromsø kommune. He doesn't always choose the most logical routes when doing first ascents, but there is more info here about obscure, never\rarely climbed peaks than anywhere else. Site is in Norwegian but his photos and route map overlays speak for themselves.