Njallavarri (Daltind) is a peak for cheaters and skiers. It is a sane and safe peak to climb in winter, amid the avalanches, stonefall, creaking glaciers, and general mountain malevolence of the Lyngen Alps. From the summit, one can look directly into the heart of Lyngen to Jeihkkevarri, the highest peak, and some of the biggest glaciers of the region. From here, the climber can see the plateaus of Finland, and the open ocean. All this with so little effort and danger. And best of all, the ski descent is pure heaven, never too difficult, but steep enough to keep one entertained all the way down. 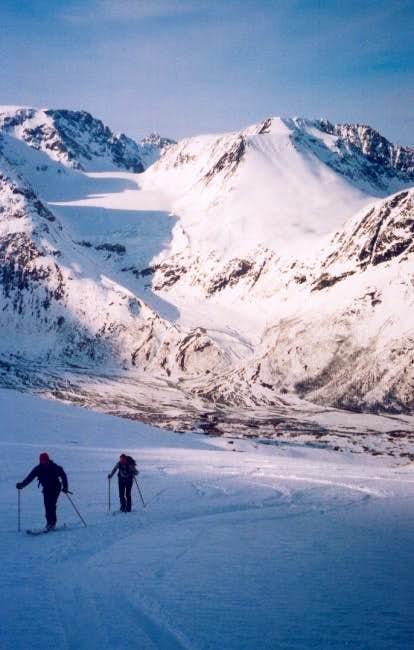 Heading up the North Face.  In the background is the Vestbreen (west glacier).  It's Sami name is Nuorttabealjiehkki, but don't ask me how to say it.
The closest airport is in Tromsø. From Tromsø there are a couple of choices. Both begin by driving out of town for 30 kilometers on E8 until coming to the turnoff to Highway 91.
Choice 1: Turn off on Highway 91 and drive it until it ends at the ferry terminal. Take the ferry to Lyngseidet. Once there, turn south on highway 868. After about 20k, enter a long tunnel. On the other side of the tunnel, is a small fishing village called Furuflaten. There is a large stream in the middle of town, on either side are dirt roads that head up the valley. After negotiating past farmhouses, park at the last farm, out of the way of the owners. The peak looms above to the left, or south side of the valley.

Choice 2: Continue driving past the turnoff to highway 91. Drive to Nordsjosbotn, where E6 joins E8. Turn left (east) and continue on E8 to Oteren (follow signs to Skibotn.) At Oteren, leave E8, turn left onto 868, and follow until reaching Furuflaten.

Both choices take about the same amount of time, providing the ferrys are timed right. Give yourself about 2 hours of driving from Tromsø to get there.

The farmers on the south side of the river are used to people parking there, but it's nice to ask. Another option is to just park at the football field, where there is plenty of space, and no permission is necessary.

The ski season is best from February to April. From April to May, skiing is still possible, but you must carry your skis up the valley. This is often the last ski trip for the local climbers during a good year, skiiers are found clear until early-mid August. Hiking is possible from June to October.

The Norwegian book and movie 'Ni Liv' or the English version 'We Die Alone' tells the story of a WWII sabatour who narrowly escapes death during the war in just about every way there is to die. In this valley, that we climbers hikers and skiers enjoy so much today, Jan suffered. While trying to hide from German soldiers he tried to travel cross country in Lyngen. This isn't easy today, and was tougher then for him on borrowed skis. First he became lost in a blinding snowstorm. Second, he was caught in an avalanche (skis destroyed, not good for a Norwegian). Third, he became snowblind and wandered around in this valley for 4 days. He couldn't just walk downhill because moraines blocked the way. Finally he managed to get to Furuflaten, where the locals risked their lives sneaking him across the fjord to a hut where he hid out for weeks, waiting for a chance for others to help him. Here, he cut off his frostbitten toes one by one as they became gangrenous.
Just a small chapter of WWII history, but it makes the valley trudge less boring.

I skied Daltind in April myself, and it is really great. However, I've read elsewhere that it is often ok to ski in June, even as late as early August. See e.g. http://www.home.no/tolarsen/daltinde.html

True, Daltind is known as the last great ski run of the seasons for many of the locals. I'll clarify the ski season on the main page, as the mountain itself is skiable almost year round, though the approach is not. If you have any pics to add to Njallavarri, please do so, the page really needs some more. Takk, og vi ses i fjella, og god påske!