The Mainalo mountain range is one of the largest and most famous mountain ranges in Greece. Located at the center of the Peloponnese in the jurisdiction of Arkadia, it hosts 50 peaks over 1500m. Even so it has a small highest elevation, that being Ostrakina or Profitis Ilias at 1981m, it has a very high average elevation that being around 1100m. The range, has two distinct sub ranges the East and West. The east boasts some alpine and has the highest elevations whilst the west is purely under the treeline.

Here are some of the highest peaks of the Massif

The East Massif is the most important part of the range. It hosts every single of the above mentioned peaks as well as the Mainalo Ski Resort. The East Massif is bordered by the Villages of Vitina and Alonistena at the west and the Tripoli plateau on the east. This massif is marked by two important alpine formations, Ostrakina Massif and the Aintinis peak; these two formations are connected to each-other through the Mourtzia ridge. The massif is very steep and features tight packed glades in elevations up to 1900m, with only few summits being completely void of trees.

In the above map you can clearly see many peaks of the massif as well as other important points of interest. The two main hiking centers are the Ostrakina Plateau (home of the ski resort) and the village of Rohno. It is possible that you can hike from Rohno to the plateau and summit all the summits in approx. two days of hard hiking. 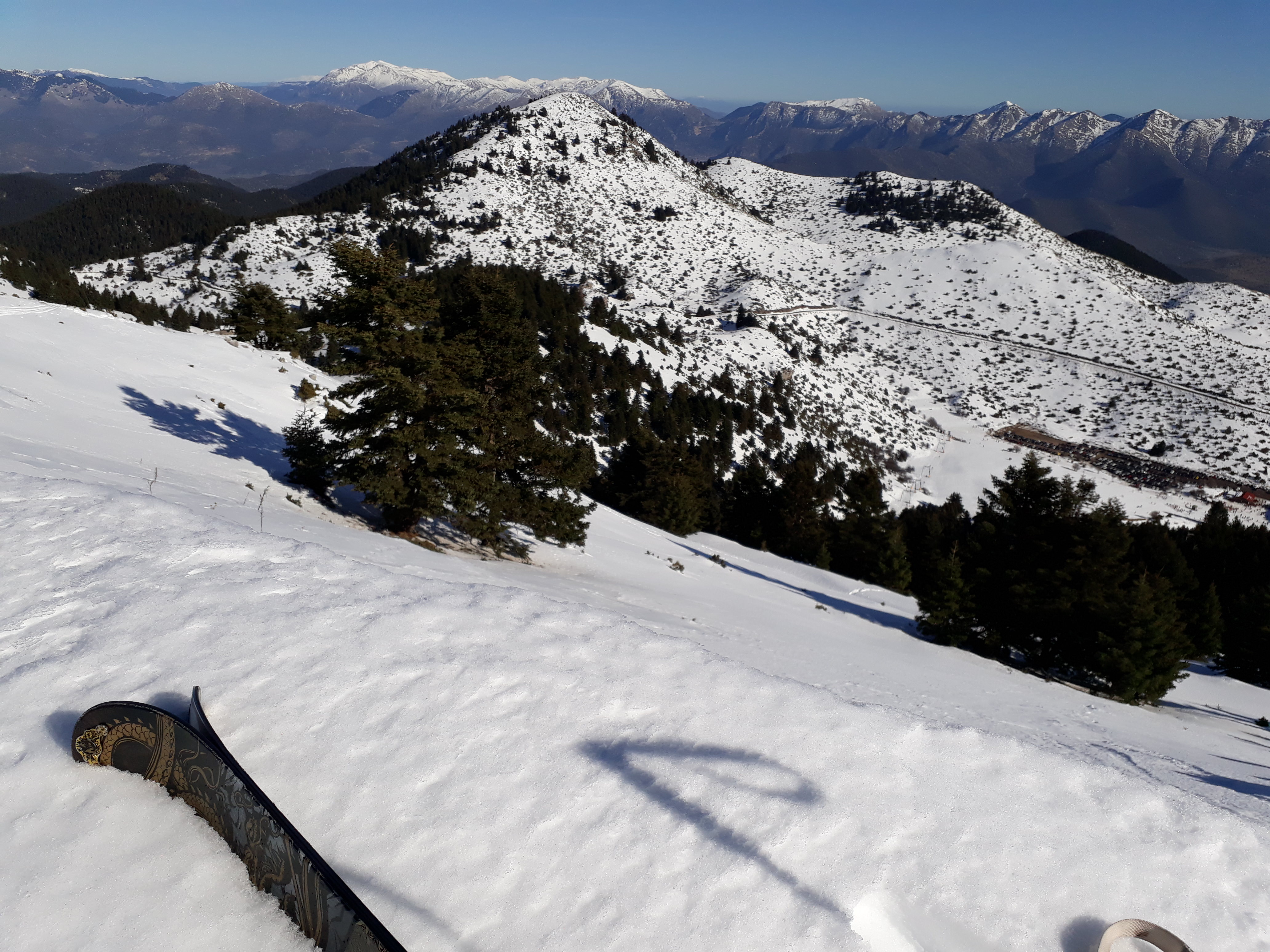 Mauri Korifi as seen from the ski center 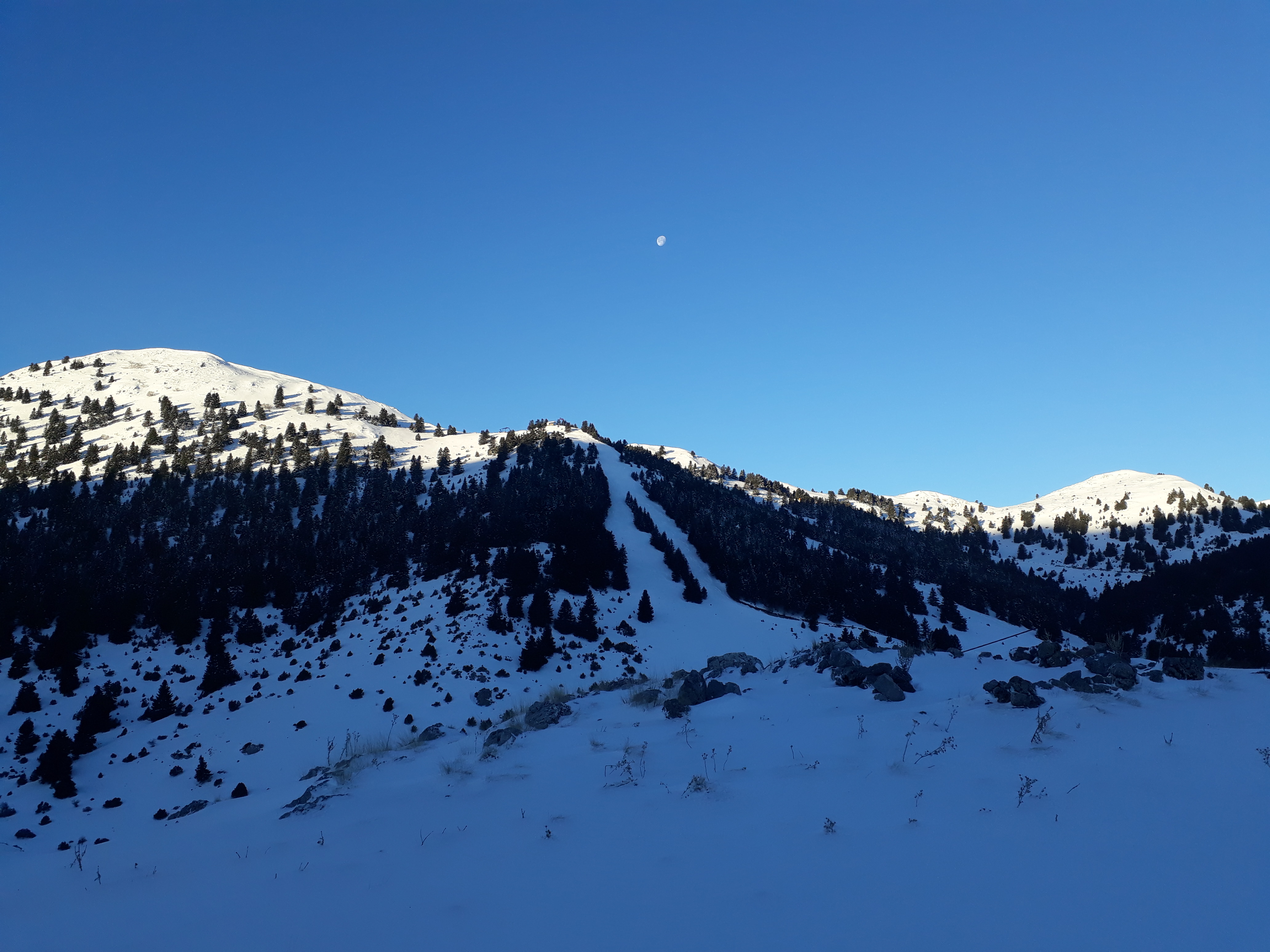 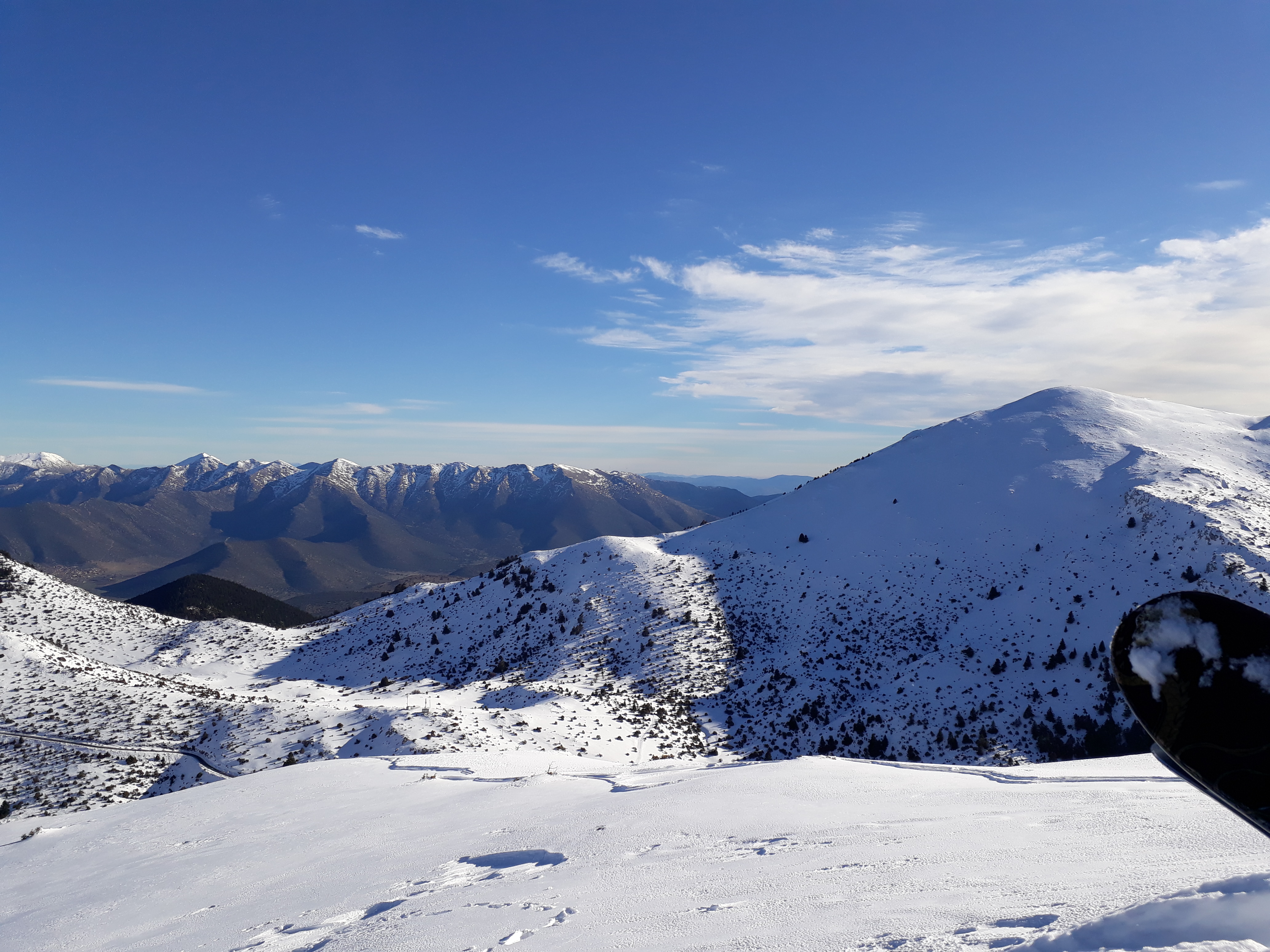 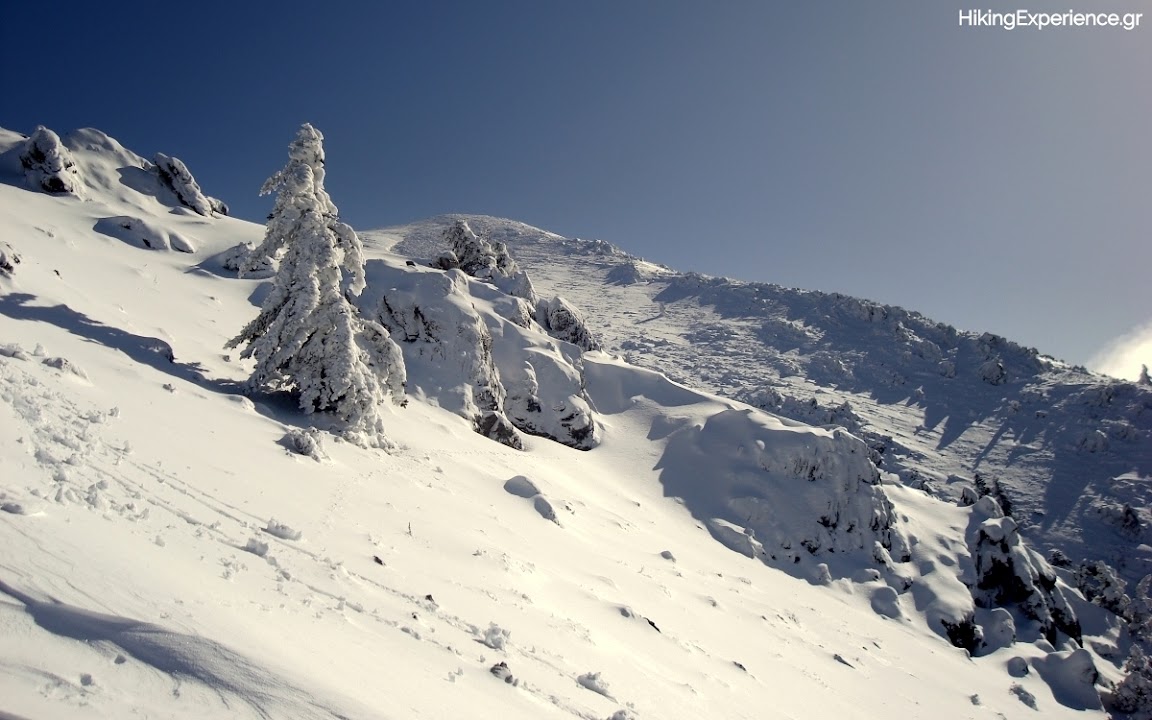 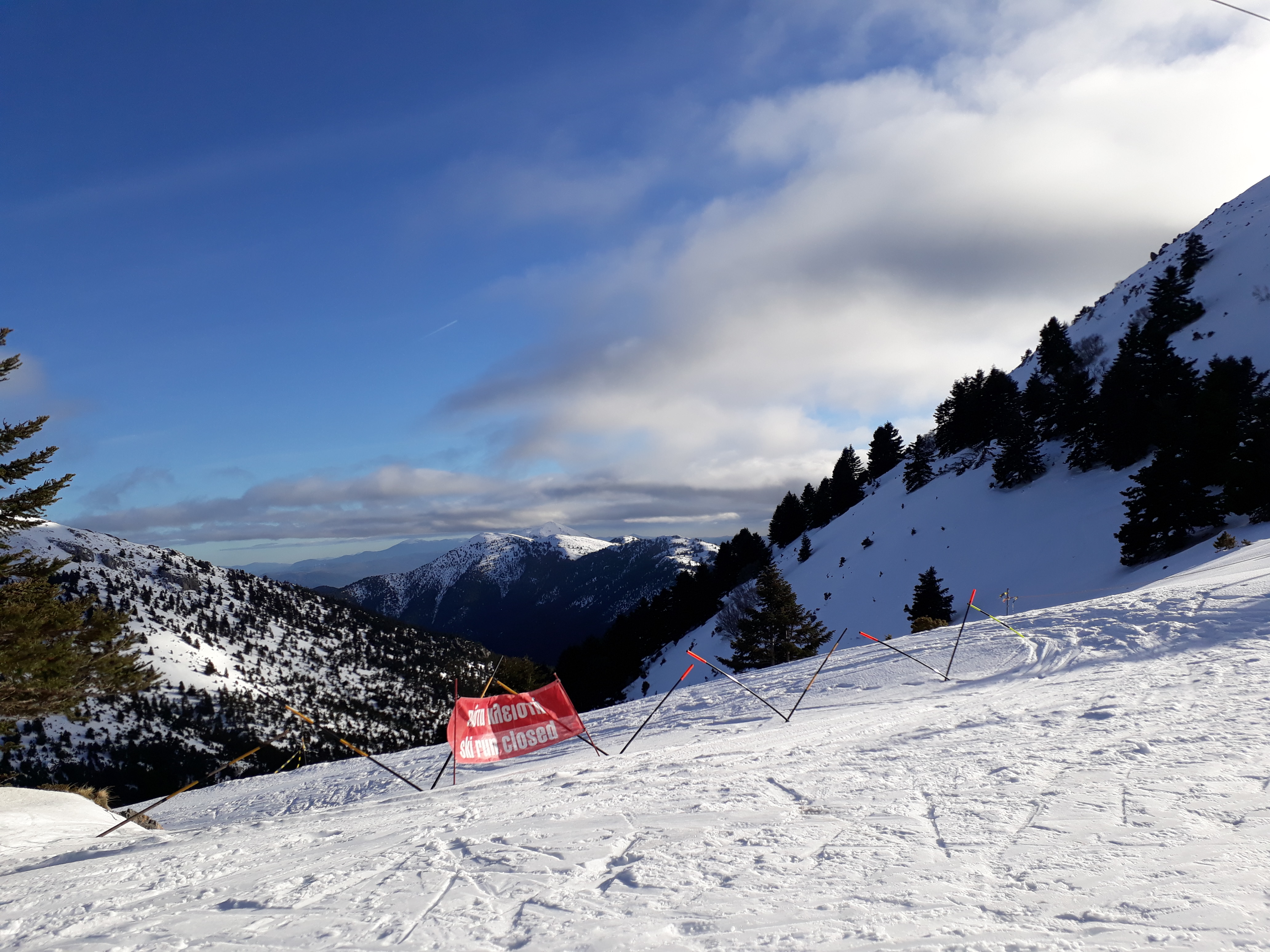 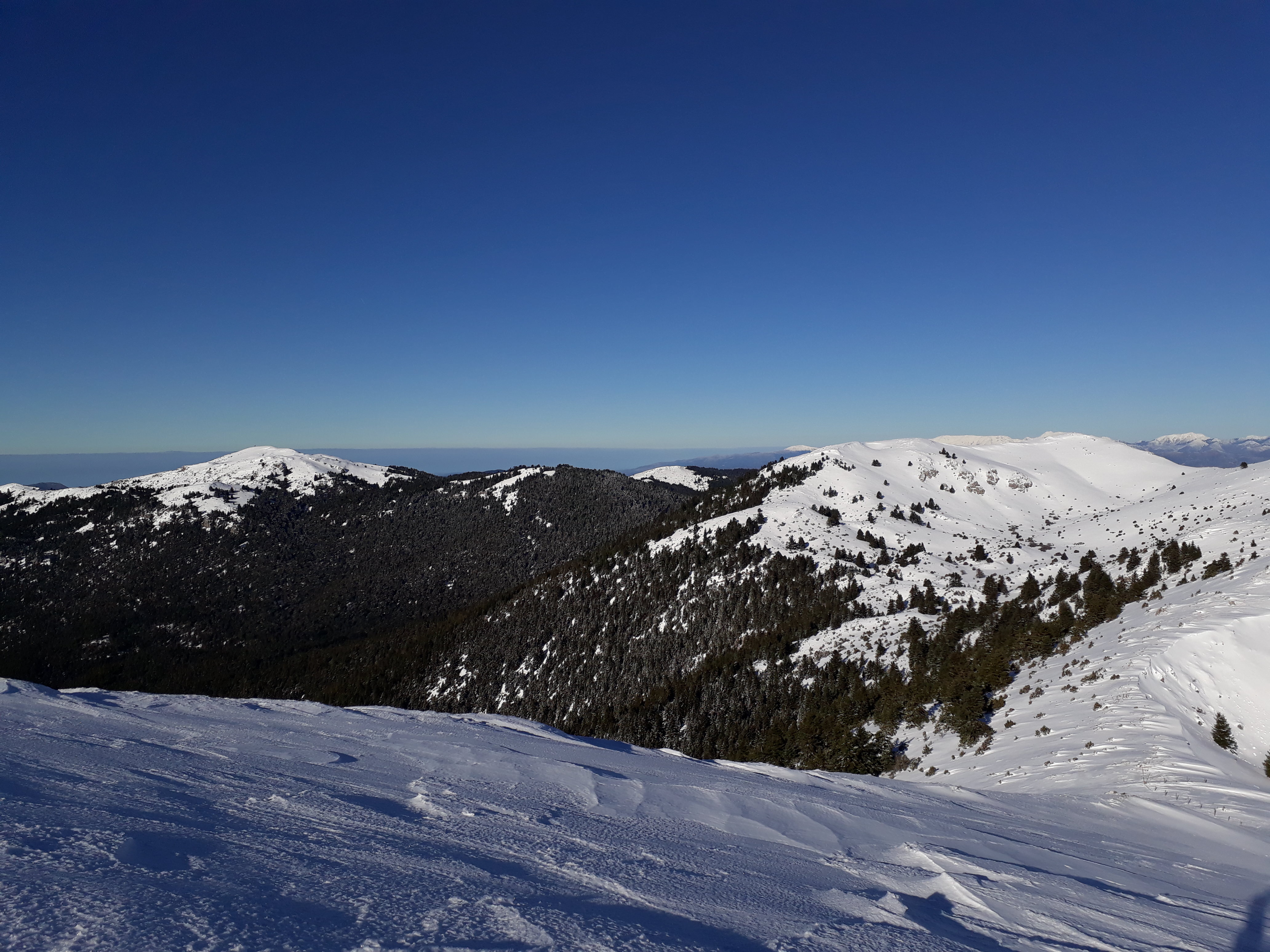 There are many different trails throughout the East Massif, the main trails connect some of the villages in the range. These trails are not dense and create more of a net than a circuit; the higher you go the less trails there are. This being said the southern peaks of the range only features one access point; this is also the case with Ostrakina (1981m) where there are only two trails that lead up the summit. The East Massif provides countless opportunities in high elevation treeline hiking as well as alpine hiking.

The West Massif is a large "sea" of peaks that most closely resemble rolling hills; these peaks are low prominence purely under the treeline. This area is freaking massive, from Vytina to Megalopoli to the South and Dimitsana to the West. There is sadly not much information on the peaks but what seems to be the highest point is the West Mainalo (1643m) just above the village of Zigovitsi. There are many other peaks between 1500-1600m of elevation. Even though these peaks are quite high above the plateaus and villages, the fact that these peaks are tame makes no peak stand out. The good thing is that there are amazingly many trails, the Mainalon trail long distance trail runs through almost the entire range with so many side trails and access roads. You can hike virtual anywhere on the range
The above map clearly shows most summits and points of interest, it is not as dense as the East Massif but it still has numerous peaks, springs and many others. Sadly i will not be providing many pictures. 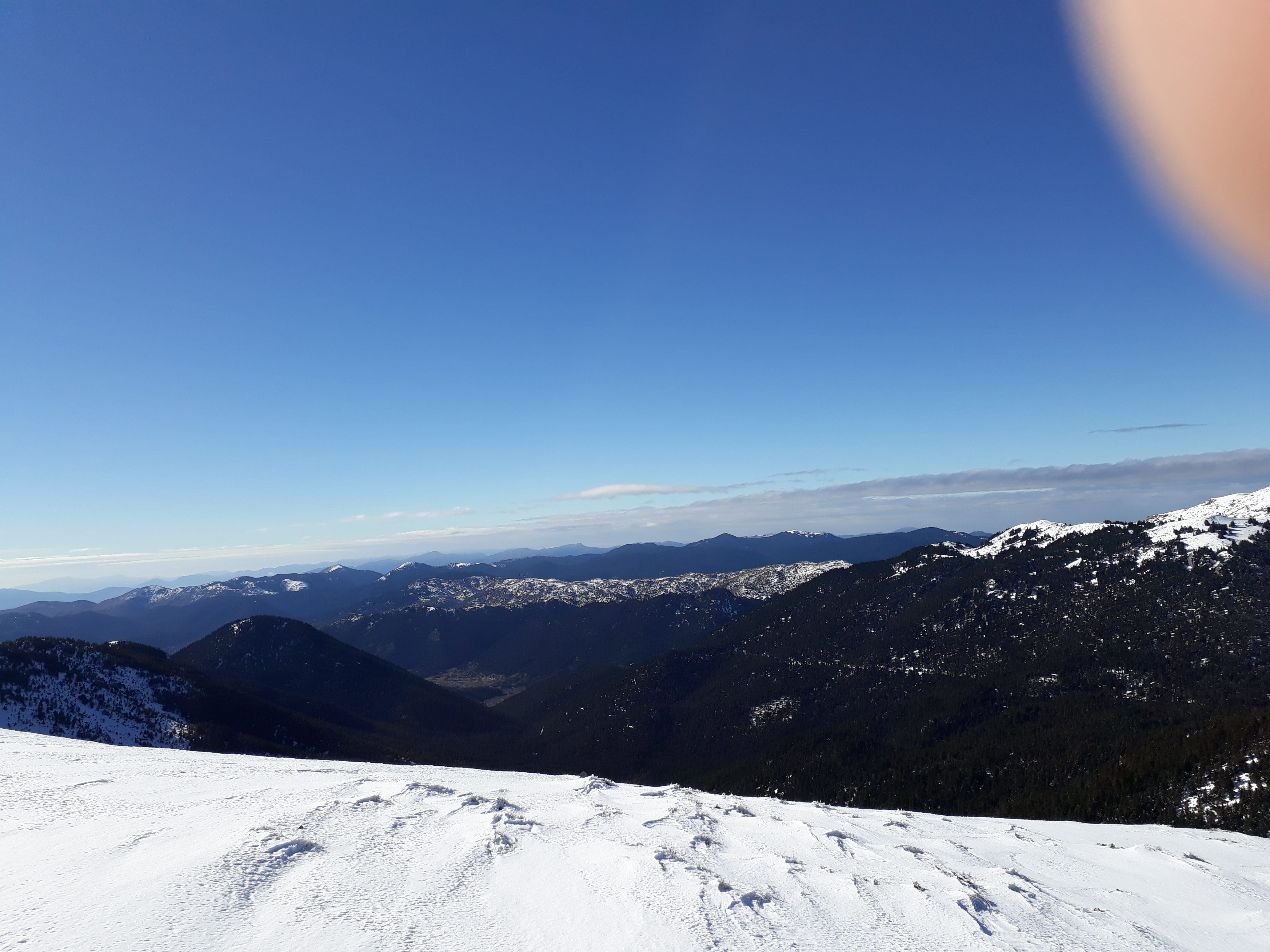 The Mainalon Ski Resort is located in the Ostrakina plateau at 1600m of elevation. The resort is pretty small only boasting three ski lifts but gets a reasonable amount of snowfall and is rather close to Athens. The ski pass is at 10 Euros (per day) and allows access to 5 trails all under treeline with the highest elevation being around 1800m. The skiing is almost entirely under the treeline and offers great powder, pillows and tree-skiing; that being said i have witnessed an avalanche so keep that in mind. As in most Greek mountains you can ski tour. There are many non designated ski routes on the mountain, the best thing to do is asses routes and go ski but as always be wary of Avy danger and weather conditions. My recommended ski routes are:

Hike up using touring skis from the refuge and road at 1600m and reach the summit 2h later. The North West aspect offer great open bowl skiing with soft slushy powder, there are minimal trees and great snow coverage. You can also ski the East aspect although i would not recommend it as it is a full on headwall with maybe two or three no fall zones that you can possibly ski.

Use the normal hiking trail to reach the snowline (say 1500m) and the follow the same trail up to the summit with skis and then dissent the South West aspect. The exposed nature of the peak combined with the warmer snow-pack due to elevation and geography, posses high risk of avalanches to be aware.

The peak of West Mainalo gets adequate snow converge such that you can ski; due to the fact that it is under the treeline don't expect amazing alpine skiing or long dissents but a nice ski-tour on the trails around the peak won't disappoint.

For anyone interested in skiing off-piste (tour or otherwise) it is key to be knowledgeable of Avalanche rescue as well as being adequately prepared for anything. Always pack an Avy Beacon, Probe, and Shovel. There are no avalanche condition websites for Greece so it is key that you can self asses the terrain and snow-pack.

You can find all the information you need about skiing in and around the resort here: https://www.summitpost.org/freeriding-in-mainalo/1013454

The Mainalon Trail is a non circular long distance trail that passes through and around the Mainalon range, it covers a distance of 75Km starting from Stemnitsa and ending in the village of Lagadia. The trail can be hiked in about two days by taking advantage of the many villages that you pass through. You can also run the village in less than one day, the advantage is that there are no elevation extremes and the trail is rather flat.
Find more details here: http://menalontrail.eu/

The climate of the area is quite unique given the elevation. The range feels more like the PWN than the alps, this is due to the high forestation and large amounts of precipitation in the area. The range is very humid and rather cold boasting some of the coldest fronts in Greece, easily falling under -10C during storms.
The area has stable weather and gets storms for multiple days although harsh weather is a staple of the area, quick changes of weather during storms (i.e. from rain to no rain, from cloudy to snowy) is another problem

Due to the wide geographic span of the range i will be providing some links to the directions for the summit centers of the area. Keep in mind that the roads in the area are not great and that during the winter especially during storms having tire chains is a must.

Camping is as always free and allowed. Keep in mind that you should always camp above the treeline and avoid lighting a fire. There is a refuge at the Ostrakina plateau just above the Ski Resort. Also you won't have to camp if you are going to hike the Mainalon Trail.

The Ostrakina refuge located at an elevation of 1580m and is operated by the Greek Mountaineering Club of Tripoli, and can host up to 60 people. With 4 rooms that can comfortably sleep 30 some people, a bathroom with a shower (and yes hot water), a kitchen and a large dinning hall/living space. The refuge opens for groups of 10 or more people with a reasonable price of 12 euros per person; note that use of the kitchen is charged extra. It stands under the peak of Ostrakina and is a part of the E4 European long distance trail, a perfect spot to spend the night if hiking in the area. The refuge is staffed with one "gaurd" when open to tend refuge while you stay. 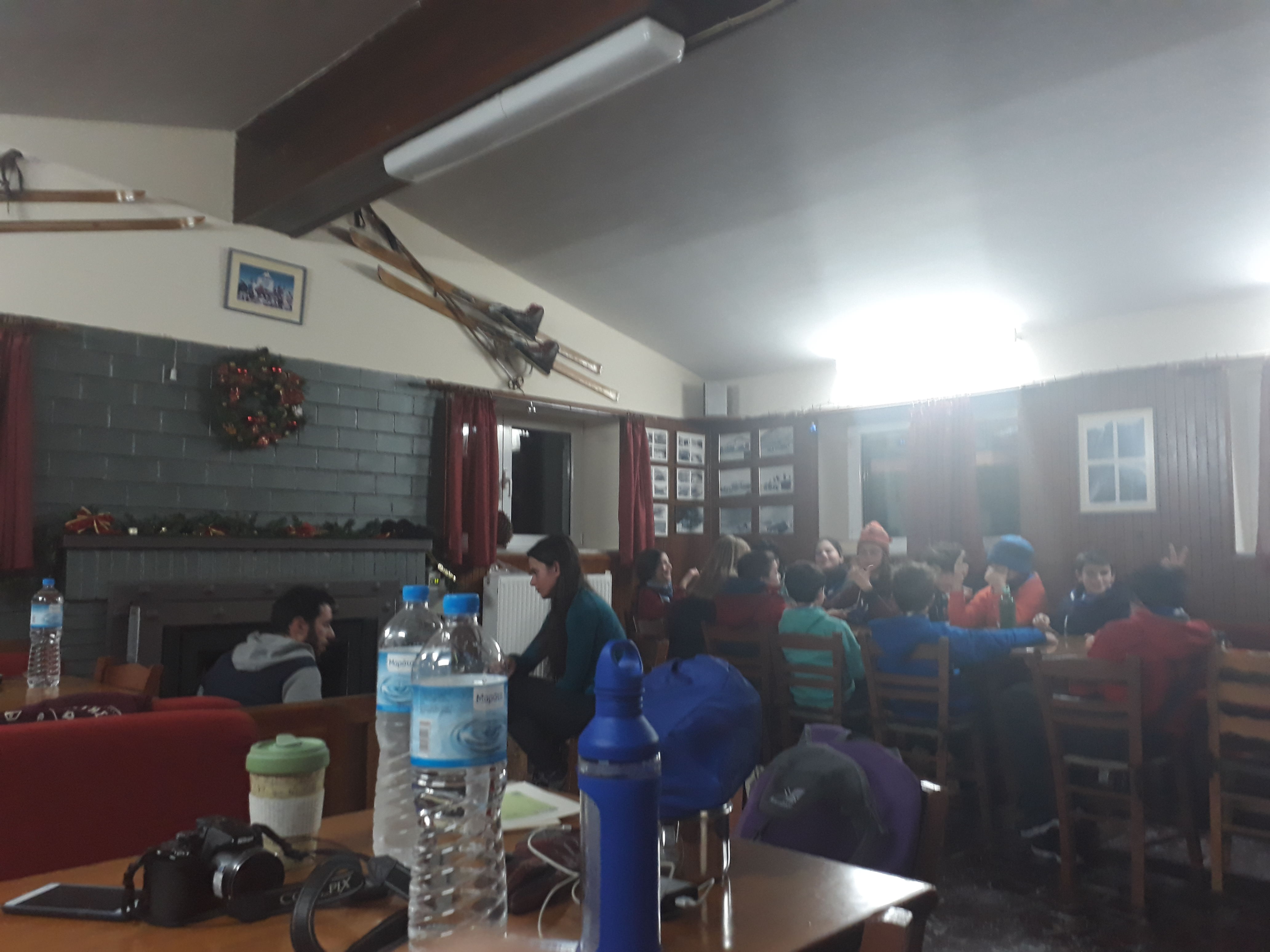 Scouts hanging in the dinning hall of the refuge