The Aoos valley is a river valley north of Ioannina in the Greek region of Ypirous. The large river of Aoos or else Vjosa flows through the valley and is fed by the four large mountains in the area: Mount Smolikas (2637m), The Tymfi massif (2497m), the Vassilitsa dual peaks (2249m) and, Trapezitsa (2022m).
The area receives a lot of snow during the winter as many storms get 'trapped' between the peaks. The area is also home to the well known vikos gorge, an important canyon south of the Tymfi massif.
The Greek portion of the valley is walled by Konitsa on the west, the Vikos gorge on the south, the peak of Smolikas to the north and the Vassilitsa ski resort base to the east. The total area is somewhere under 565.2072 sq km with multiple villages but most notably the city of Konitsa. 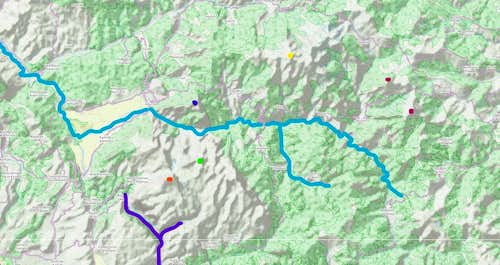 To reach the valley you have to head to the city of Konitsa. From there you can easily access the river, although to reach the Vikos gorge you will have to exit the Patras - Konitsa highway before Konitsa.
From Athens you can take the E65 highway until Patras, from there head north through the Rio Antirio bridge and drive the E951 up to the city of Ioannina, from there continue north through E853 and about after 1 hour you will reach Konitsa.
To reach the village of Vikos you must exit for Aristi.

The valley has 6 mountains with many more individual peaks. Sadly it has limited opportunities to peak bag through the peakbagger website. Here are all the links to the mountains:

You can do many things in the park ranging from skiing, hiking to climbing and white water rafting. The park is very large in size and includes several villages, lakes, rivers and well; peaks.


As always in Greece you can camp on the mountains anywhere you like. Try not to camp near homes as that might be the only way to get in trouble (in case they call the police, greek villagers don't like campers in their villages). It is as always, advised to camp above the tree line as it is better for fire hazards. There are no general camping facilities but there are multiple mountain huts on the mountains.
Please don't leave any garbage whilst camping. 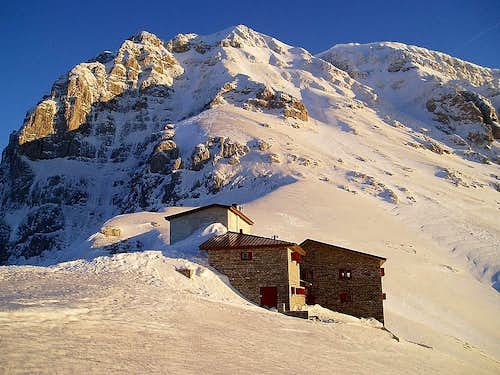 Astraka Hut
The Astraka hut/refuge is located at 1950m of elevation at the top of the initial slope from the south. It is exactly underneath the face of Astraka, a face that looks very impresive. The refuge can accomodate 51 people in the bunk bed. Individuals must bring their own liner and/or sleeping bags but the refuge provides pillows and sheets. Furthermore it is fully equiped with a kitchen and restaurant. Note that it is open between May and October and is closed druing the winter months, but you can contact the administrators for them to open the refuge. (That was the case during the TGR segment shot in Greece where skiers stayed at the refuge during winter.) The cost is 13 euros for individuals without afiliation with the Greek Climbing Society.
Refuge Website

The other mountain refuge on the Aoos valley is the one located above the village of Palioselli on the southern slopes of mt Smoikas. The refuge is on the O3 trail (see Smolikas main page) and approximately a 7k drive from the village of Palioselli. It has a capacity of 24 people, fresh running water, it has 3 hot water showers (litteraly the best thing that exists after a long day in the mountains), 2 bathrooms and a fully equiped kitchen. The refuge gets electricity from hydrokinesis. Here is the website link that sadly in Greek: Link.