Taygetos is one of the largest mountain ranges in Greece. Located in south peloponise streching 110km in length and 30km in width it has multiple 2000+ peak and is 'broken' in 3 parts. 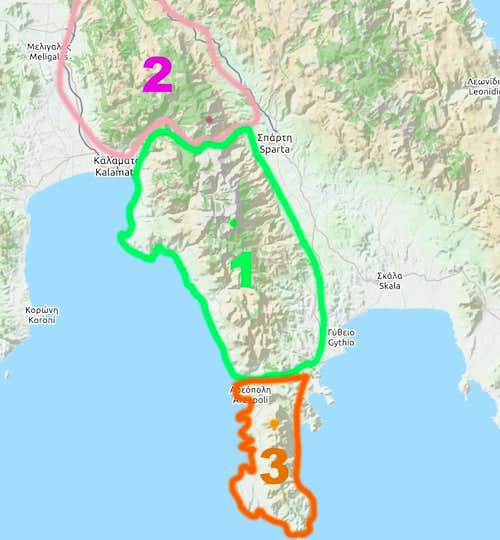 Taygetos Broken into 3 parts
The northern part of tygetos denoted with 2 begins at the megaloupolh plateau until the canyon between the village of trypi and silmboves called "The big gorge" that devides the norther with the middle part of the range. Its highest peak is called 'xerovouna' in greek rising 1852m just above the gorge and is the first of the peaks that create the famed taygetos ridge.

The middle part of tygetos denoted with 1 begins at the big gorge and meets the south part at the gorge of saggias between aeropoli and kotronas. The summit that is also the heighest peak in the range and 11th in Greece is called 'profitis hlias' or prophet elias in english and rises to 2407m. Directly above the eastern sides of the mountain and the city of sparti.
The southern part of tygetos denoted with 3 begins at the gorge of saggias and finishes as the mountain fades to the southern agean sea. The summit is called "saggias" like the gorge and rises to 1227m and is directly above the saggias gorge.
On the map i have marked each high summit with a respective color 'bubble'.
The mountain is well forested and has many streams and gorges throught. Due to its location it is well 'watered' by southern winds and storms having a good ammount of rainfall every year and getting its fair share of snow as well.
It is also the peak known as the highest peak of southern peloponise in peakbagger, something extra as well as being the highest peak in the peloponise.

North Taygetos has some high summits although no in par with middle taygetos. Its summit with an elevation of 1852m is home to the northern taygetos ridge that is also home to the rest of the high peaks. Most of the northern range is hill like and not mountainus whilst the only alpine locations are on the northern ridge and the general xerovouna area.
On the following map we can see:

The northern Range
Denoted with blue the main summit called 'Xerovouna' at 1852m that is rather hil-like in appearance and generaly rocky. The acsses road cannot be seen in this map but is exactly at the alpine boundary.
Denoted with purple is the second highest summit called 'Neraidovraxos' or fairy rock in english, with an elevation of 1784m. Its acsses road is the same as 'Xerovounas' although the two are speperated by a small gorge.
Denoted with green is the third highest summit called 'Pyrgaki' or little tower in english, with an elevation of 1732m. The acsses road is the same and is also climable through its south ridge that connects it with 'neraidovraxos'.
Denoted with yellow is the road passing through "The Big Gorge".
Also in the respectiv colors we can see the acsses points for each summit. 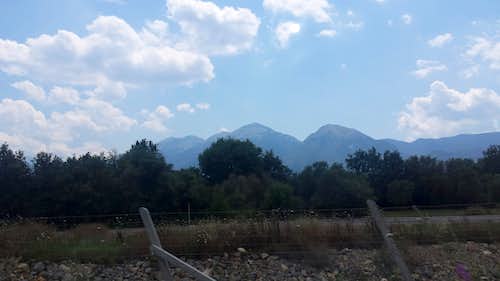 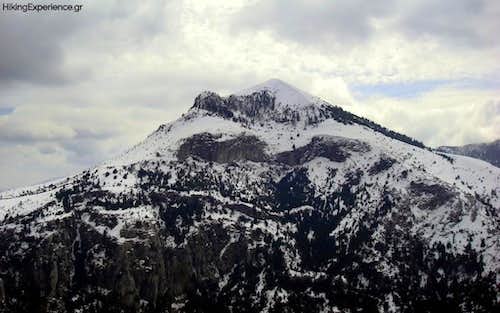 The middle taygetos is home to the highest summits of the range. Home to the pyramid of profitis ilias the 2407m range high point. Flanked on the east by Sparti and west by Kalamata. It has multiple 2000+m high summits and is home to the 'pentadaxtulo' the ridge of the five summits that starts from spanaki and finishes just under xalasmeno. 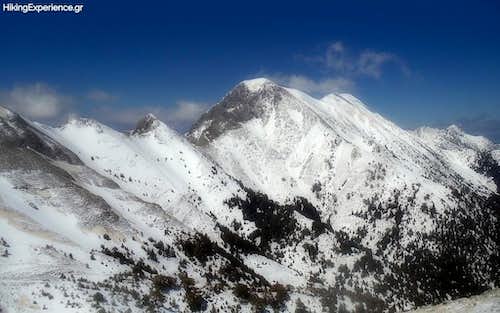 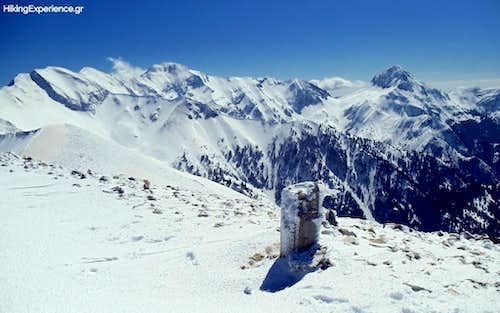 The Ridge as seen from Spanakaki

The Southern part is the lowest and less alpine area of the whole range. Its highest summit is a measly 1227m and most of its summit are under 1000m. Most of these mountains are hill like and not rocky giving them a more passive image. 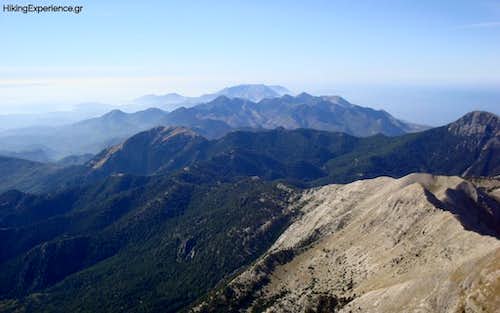 Southern Taygetos as seen from the summit 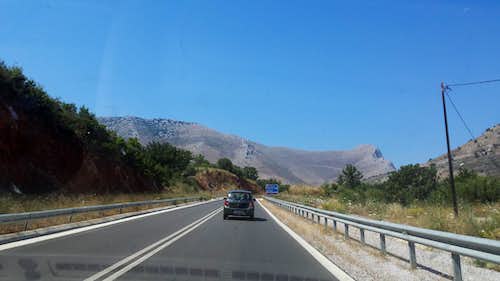 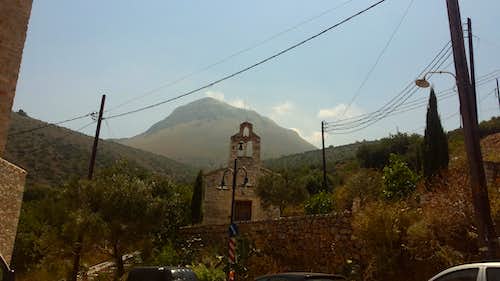 The summit of the range, the skytowering pyramid of profiths hlias reaching to 2407m. There are mainly three routes to acsses the beautiful summit of taygetos for further details check the main page of the mountain.

The fourth and insanly beautiful monolithic mountain of Xlasmeno at an elevation of 2204m. Located on the west of Profiths Hlias connected by the one and only acsses trail between the two. The acsses trail traverses the rest of the ridge from the summit towards the ridge fall of on the meeting point of the 'xalasmeno' west face and the ridge. 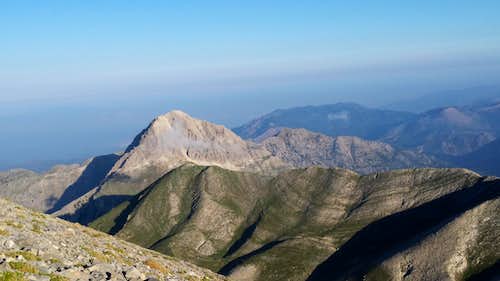 Xalasmeno seen from the summit trail 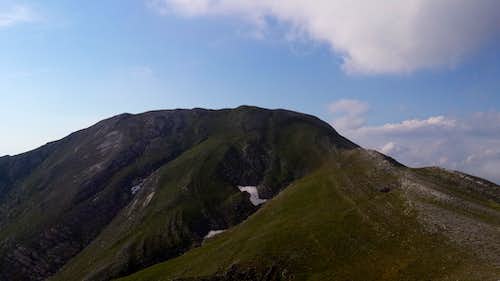 Athanati raxh as seen from the trail. 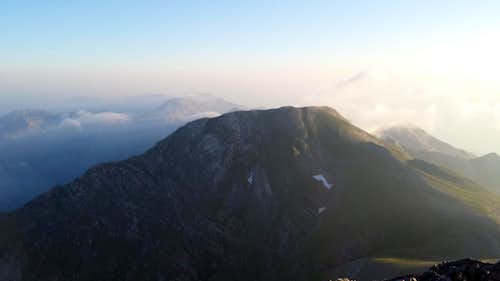 Athanati Raxh from the summit, during the sunrise

You can get acsses to the trails of taygetos from Athens easly. But the city of spati is surely the best base of operations for multiple climbs in the mountain. You can get to Sparti form Athens following: 8 until korinth, then follow E65 until tripoli and finaly turn to E961 to finaly arrive in Sparti.
There are more acsses points, to climb the north taygetos sparti is still a 'to-go' base camp, climbing middle taygetos is also sparti the best location, but to climb the south and acssesing its summit the best location is Aeropoli.
Kalamata is also a great point to get to the more remote and lower west summits of the range as you can easily get acsses to "The big gorge" and dirve to the inner range villages.

There are no restrictions in camping and climbing anything and anywhere in the area. There are general 'do-nots' stuff like no fires and no waste. Also hunting is ilegal outside the specified hunting season.

Due to the fact that the weather is quite wet throughout the cold months there is a large ammount of snow fall. There are no ski resorts on the range and no designated ski routes although ski mountaineering is something usual on the mountain. There are multiple videos of ski mo and snowboarding on the mountain; here is the best link i've found:

You are fully able to camp anywhere on the mountain although there are some refugees around the mountain. Climbing to Profiths Hlias most people camp on the summit, and during the summer months it is usual for there to be many tents and parties on the summit. The summit offers many windblockers to camp into as well as the church. 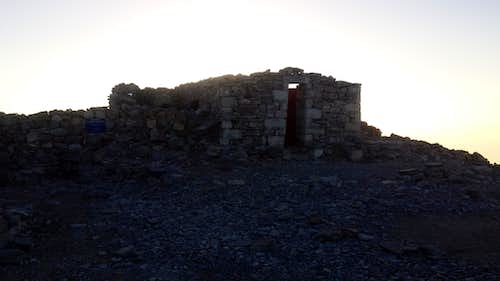 The chapel of profitis hlias 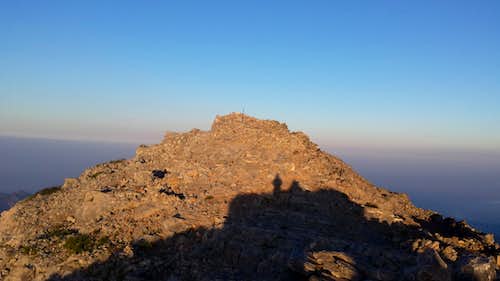 The summit chapel and the summit from the eastmost windblocker

Mount Taygetos is a very high isolation peak, it has an isolation of 174km which that peak is Pranassos. That means that the peak get a lot of snow and rain, although its quite south there is still quite a lot of snowfall through the season. Also since there isn't a Pindus weather block like in other mountains Taygetos is generaly considered a West Greece peak and gets a lot of rain.
Great example of the weather on the mountain is the existence of the Rintomo gorge, the gorge between the main middle massif and the western part of the middle massif.
To find the weather for the mountain use the following links: