You can see that there exist two pages of the Pindos Mountains; here is the other. I have created this page since the other page has not been edited since April 25 2008. I have requested the page and so far have not gotten a response. That page and user have been inactive for a long time. Thus i took it upon myself to create a complete Pindos page.
Thank you.

In this page we will be considering Pindos to be that long, from the Greek-Albanian border to the Githio cape.

Such, Pindos is a very diverse in altitude and in types of mountains encountered. There are some peakes that are a bit more wide spread in width than the main spine of the range. Pindos is a mountainrange that is a parent range (see the Alps) and has several subdivisions. The Aoos National Park, The Tzoumerka Mounatins, Agrafa Mountains, Akarnanian Mountains, Chelmos, Mainalo, and Taygetos.

Due to the length of the range there are several subranges of the Pindos mountains. Here i will be describing all of the areas: 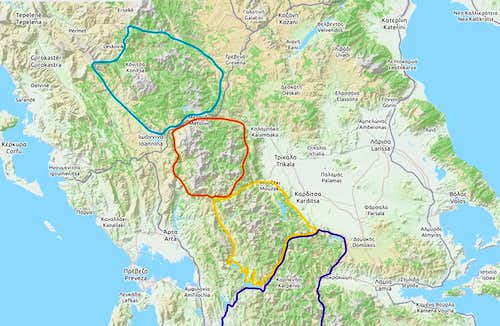 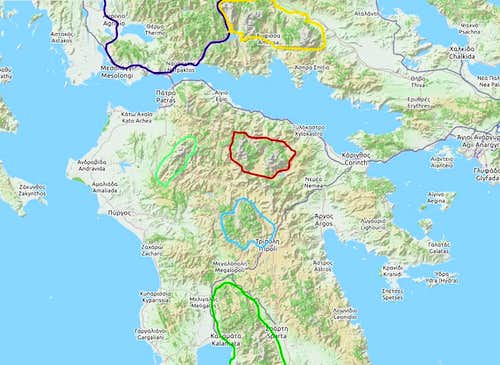 Here i will be adding some of the most important and high peaks in the Pindos Mountain Range.

As with any large mountain range, its features don't stop at peaks. The pindos mountain range has an extensive system of waterways, the waterways that will interest us will be canyons here and alpine lakes bellow.
Vikos Gorge


The Vikos Gorge is one very important and well known canyon located within the Vikos Aoos National Park south of the Timfi massif.

Located at the city of Diakofto and rising up 20Km to the city of Kalavrita (Base of Chelmos), this gorge is of great natural beauty and includes caves, waterfalls and dense vegitation. You can also go up or down the gorge with the small train that is 65 minutes round trip.

This gorge is 20km long and on the its south entrance lies the Agia Eleousa monastery. The gorge is located between Magoulia (S) and Fragkoulika (N).

This is one of the more well known gorges in Greece being a popular white water rafting destination. The gorge is rather long. The north entrance is just below the village of Dimitrasna.

Due to the relative dryness of Greece between June and October, alpine lakes are not a common phenomenon is Greece. Most alpine lakes are fed by glaciers that well, do not exist in Greece. Even so there is a large number of interesting alpine lakes across some of Greece's, most popular hiking and climbing destinations.

Greece currently has 12 national parks, 5 of them are part of the Pindos mountain range. Here they are:

Even when you will be in National parks there are no fees or checks. No need for climbing permits either.

You can camp freely anywhere is the range, although try to avoid camping under the treeline during summer since there is a high fire risk. It is recommended that you camp above treeline and don't leave any trash.