Mohon Peak is named for Jim Mahone, a Hualapai Indian born about 1854. Mahone was a scout and tracker and a member of General Crook's Indian Suppression forces of the 1870s. He lived until 1949, aged about 95 years old, given that his birth year is uncertain. His nephew, Fred Mahone, became a leader of the Hualapai Nation and was instrumental in getting the Hualapai Indian Reservation established on the bluffs overlooking the Grand Canyon.

The spelling of the peak is an "adaptation" of the name Mahone. Later maps call the peak Mohone, and current maps simply drop the final "e". Much of the western portions of the current-day O-RO Ranch was part of the old Mahon Ranch. Clearly, Mahon, Mahone, Mohone and Mohon are all variations of the same name. The pronunciation is also uncertain. There seems to be no consensus because no one knows about the peak in the first place. Assuming it sounds like the name "Mahone", it would be pronounced with a long "o" on the second syllable. Most people (as in the 3 dozen people who have climbed it) pronounce it "Moe-hawn" peak.

The O-RO Ranch is the most recent iteration of the "Baca Grant Float #5". The Cabeza de Vaca (Baca) family was given a land grant by Spain in what is today north-central New Mexico, this being in the 18th Century. The United States Government usually honored pre-existing major land grants and "ranchos" as the surveyors traveled west in the 19th Century. However, the original land grant in New Mexico had been settled upon, and the United States Government offered the heirs of the Baca family five non-contiguous "floats" of land as a swap: two in New Mexico, one in Colorado, and two in Arizona. The heirs accepted and in all cases, turned right around and sold the properties.

The float in Colorado has in recent years been purchased by the National Park Service and included enough watershed to allow for the establishment of the Great Sand Dunes National Park. The other float in Arizona was located in Rio Rico, north of Nogales, and was mis-surveyed (possibly deliberately), resulting in a confusing mish-mash of land ownership, which even today still causes issues for people in that area.

It's "Float #5" that changed hands over the years, now known as the O-RO Ranch. It is a cattle property and is so large that its cowboys and support staff live on the land months at a time, following the cattle and living out of tents, with a chuck wagon in tow. It's a fascinating place, but a very reclusive place. They prefer to maintain a very low profile. You can read about the O-RO at author Kathy McCraine's website.

Before you consider a climb, be aware that portions of the hike cross the O-RO property, and that they don't mess around if they find you. You enter onto the property entirely of your own volition, and be ready to accept any consequences that may result.

Head east on Bogles Ranch Road, going up and over the Aquarius Mountains. After cresting the Aquarius Mountains, Mohon Peak can be seen off in the distance for the first time. About 12.8 miles from the Bogles Road/Upper Trout Creek Road intersection, come to a signed intersection with Wagon Bow Road. There is a new Arizona Game and Fish Public Access kiosk here. Sign in and take a free ranch pass.

Great Western Road will rumble north past a pile of boulders, top out on a soft rise, then start descending gently toward Winslow Canyon. From the main Bogles Ranch Road, this is about 4 miles in. Up to this point, any vehicle can manage these roads in dry conditions. In winter, it snows here and when wet, some of these roads turn into big mud puddles.

The road into Winslow Canyon becomes rocky and steep, and you need 4-wheel drive. Descend into the canyon and carefully up the other side, where the road is heavily eroded. If your vehicle has sufficient clearance and power, rumble north, dropping into and out of Gonzales Canyon, and then north some more up a soft rise north of Little Mesa Tank. You have to park here. The road past this point is undrivable. From Bogles Ranch Road, this is about 7 miles in.

The road's condition within Winslow and Gonzales Canyons will determine how far you can proceed. In 2010, I found the road completely washed out within Winslow Canyon. In 2016, it was functioning again, but in rough shape. The issue is large rocks, and ruts big enough to hide a small army in. We actually parked within Winslow Canyon on out 2016 hike, figuring that we could walk faster than we would be driving those last miles to Little Mesa Tank.

The road goes slightly past Little Mesa Tank and makes a bend left. There's an old air-strip to the west. You want a lesser track that continues north. It soon drops 270 feet into Dividing Canyon. Down low, the road is covered over in 4-foot boulders, and probably last saw a Jeep in the 1970s. In the bottom of Dividing Canyon, angle right (east) and soon, come to a gate and fence. 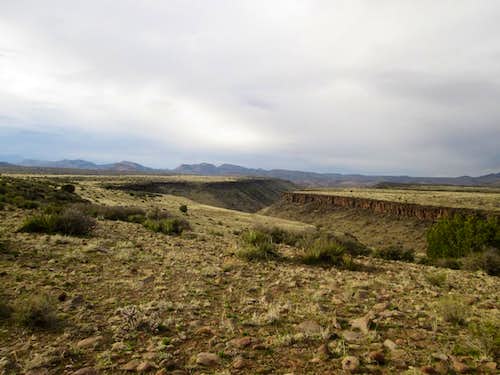 
Cross to the other side, and stay low in the trees for about a quarter-mile until you meet a much better road. This road angles left and steeply uphill, gaining about 500 feet to top out on a long ridge. It then drops about 75 feet. Stay eastbound and soon pass Goldwater Tank. Keep trending east. The track gains uphill. At the highpoint of this track, angle left and start the off-trail trek. From Little Mesa Tank to here is about 3 miles, or about 6 from Winslow Canyon. 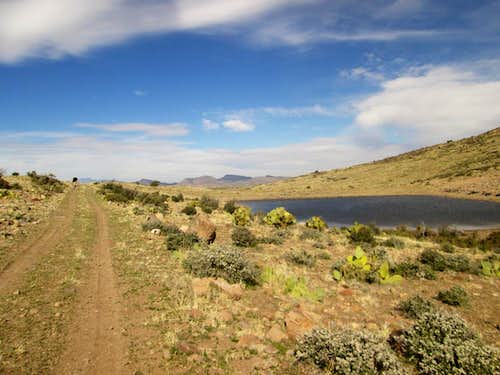 
The off-trail hiking is easy. The brush is very low, mowed down to the nubs by the cattle that feed on it. Follow the ridges upward. You aim for Peak 6406 up ahead, which is a noticeable pointed bump about 1,200 feet higher. Along the way, there are a couple easy cliff bands to work through. Angle left of Peak 6406 and achieve a saddle immediately to its east. Keep hiking uphill, aiming for another pointy bump on the skyline ahead. This is near the summit. You'll come to a pass at about 7,100 feet. From there, it's a brushy 400 feet to the top. The off-trail portion also covers about 3 miles each way, with about 2,300 feet of gain.

Allow about 6-10 hours round trip depending on where you parked. The hiking and navigation is very easy. It's long and tedious.

You are reminded that you are on land deeded or leased to the O-RO for most of this hike.

There is no developed camping in this area. You might be able to camp unseen within the canyons. 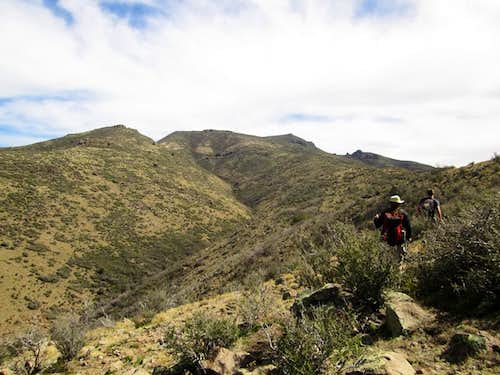 Mohon Peak from near Peak 6406

I was able to get my Nissan Xterra all the way to Little Mesa Tank using Great Western yesterday (5/6/2012). While the road was partially washed out in a couple places, a sufficiently narrow off-road vehicle can still squeeze by.