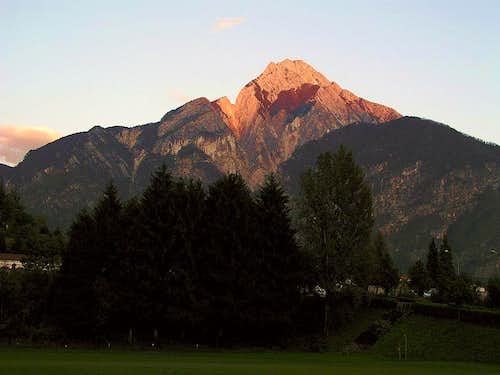 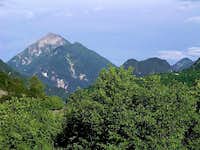 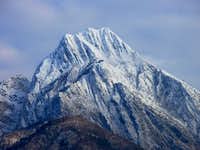 dante - from Lago Verzegnis
You probably know the old song: 'Vino Amaro, vino Amaro'. Yes, amaro wine has its origin right here, in Amaro, some 300 m above the see level, on the southern slopes of Monte Amariana. But we are not here because of wine, it's mountains, which are interesting for us. Whenever I was passing by with car, this nice, stand alone mountain was catching my eyes. Then I read it was famous by its flora in spring and by its broad panorama - and its position on my wish list was rising more and more.

No doubt it is the home mountain of Tolmezzo city, the centre of Carnia. With a few rugged side summits its massif is rising more than 1600 meters above the confluence of Tagliamento and Fella rivers. And, luckilly, you can't drive up very high on the mountain. From Amaro a narrow mountain road goes up to some 980 m, but you must be lucky to reach its end with a car. In June 2006 we had to stop on some 700 m, because the road was hopelessly covered with tons of rock, which came down by a ravine in winter.

As you can see from pictures, Monte Amariana is a nice pyramid. Actually it is a ridge, going in a West-East direction. Its slopes are steep, parts of the western ridge looks even quite wild, and also the easiest approach from the South requires overcoming a rocky barrier, so that the route is secured with a cable. And, indeed, in June its southern slopes are full of blossoming flowers of all kinds.

Monte Amariana belongs to the central range of Carnic Alps, but as they are lying south of the more known main ridge (Hauptkamm), here on SummitPost we call them Southern Carnic Alps. In their Eastern part they are characterized by separate small groups, so Monte Amariana is belonging to the group of Monte Sernio and Creta Grauzaria. As these mountains are standing quite apart, they offer great panoramas on all sides. 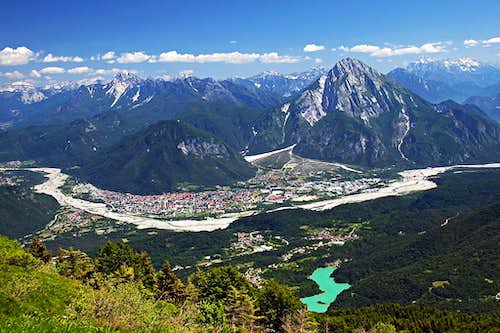 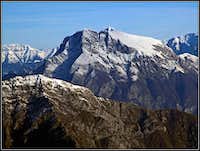 From Monte Cuar
As on many mountains in Carnic and Julian Alps, also on Monte Amariana we can find in the upper part dachstein limestone layers, superimposed on the layers of a bit older dolomia principale.

San Floriano from the plane of Illegio
As mentioned in the Getting There chapter, the village of Illegio is one of the trailheads for Monte Amariana (from the NW). But the village and its neighbourhood is worth visiting itself. If you have additional two hours, this is worth seeing there:

One of the moulins in Illegio

This nice village, inhabited already in the times of Ancient Romans, is situated on a picturesque small plane among the mountains. From Tolmezzo you have only some 10 minutes of drive till there, but the plane can not be seen from the surrounding main valleys. Rewarding is a stroll among picturesque old houses and especially visit of a series of old moulins, lined along a creek, having its source in the middle of the village. The sixteenth century Mulin dal Flec and the seventeenth century Mulin dal Ross (still in operation) are especially picturesque. In the last years in Illegio many artistic exhibitions are held.

Some 30 min of walk from Illegio, on a steep, 750 m high, dominant hill above the valley of But, the church of San Floriano stands. This treasure of medieval beauty, was first built in the 9th century, and later renovated. It is a nice place itself, with stunning views on Carnia, but it has also a great historical importance.

San Floriano panorama
Recent archaeological excavations have revealed by the church an early Christian site of San Paolo (4th century), a Longobard fortification, a small Carolingian church and the remains of medieval Castellan houses. It looks that where today the church stands alone, once there was a fortified settlement.

On the hike to San Floriano
The hike from Illegio to San Floriano is short and pleasant. A narrow road takes you out of the village and soon ends north of it. From there the ancient path descends to the creek, crosses it by a picturesque pedestrian bridge and ascends on the other side on the meadows, called Mulins. From there you continue up and in some 15 minutes again reach out of the woods. On a big, grassy mound the church of San Floriano stands and soon you can enjoy the views from its terrace and the flare of the place.

This short tour can be prolongated on Monte Gjaideit, 1082 m, which offers even broader views around.

As towards the South Carnic Alps are here already lowering down to the Po river plane, the panorama from Monte Amariana includes also the view on Adriatic sea. On the East Julian Alps are stretching, Monte Canin and Montaz being the most prominent peaks in the view. Towards the North and the West you can see virtually all Carnic summits - in the main ridge and on both sides of Tagliamento river - and beyond Carnic Alps of course also Dolomites and Hohe Tauern. Of course, only one visit in a cloudy day is not enough to show you pictures of all that.

The mountain is rising just above the highway Udine - Tarvisio - Villach. You exit it for Tolmezzo, drive towards Tolmezzo and in Amaro deter right into the village. If you are arriving from the West, you are probably coming over Passo Mauria and driving down by the Tagliamento valley. You pass Tolmezzo, reaching Amaro.

Once in Amaro you need to find the mountain road, which ascends up the southern slopes of Monte Amariana. The easiest way is to keep as much towards the East as possible. Then you just drive straight up and later left, crossing the slopes. It then depends on the road conditions how high you can reach. Ideally, if the road is completely cleaned, you park on a small saddle in a side ridge, some 1058 m high.

The second option for an ascent is Illegio, on the NW side of Monte Amariana. It can be reached from Tolmezzo's Eastern part, driving towards the North.

Description: You start walking as high as possible on the road, ascending from Amaro over the S slopes of Monte Amariana. There are fine parking places in the vicinity of a big ravine, higher there are hardly any, unless you reach the saddle on the side ridge, some 1000 m high. Trail No. 414 deters from the road just below the saddle, on the Amaro side. Fist some 300 m of the slope the trail does in many turns - through woods, over nice ledges, crossing steep slopes, all the time you can enjoy views down on Amaro. When reaching the distinct rocky wall, the path turns a bit right, avoids rocks through the last beeches and above them, reaches a broad and again quite steep grassy slope. Nevertheless, the trail is all the time comfortable, until it reaches the last rocky barrier. Good 100 m below the eastern summit ridge the path enters a distinct, but shallow ravine. It becomes steeper and goes directly upwards. Here a steel cable is installed for protection. At first it is not needed much, later it can help less experienced. Reaching the summit ridge a broad northern panorama opens. Now you turn left (westwards) and ascend by the summit ridge some 100 m more.

3. Sentiero alpinistico Mario della Marta. From the parking place on the road Amaro - Tolmezzo, at the ex gun-powder factory, cca 300 m. This route is harder than the previous two and some 6 h long.
On May 27th a group of climbers from Kranj attempted this ferrata and they report that the approach path through woods was destroyed by fire and that also the ferrata was hopelessly destroyed! Cables were ruined and despite having ferrata equipment they had to quit! Whoever has more info, please post!

Interesting enough, Monte Amariana ascents are not supported with any mountain hut. We can only wish it stays so!

Monte Amariana can be climbed virtually any time of the year, even if in hard winter the ascent can be very hard and requires full winter equipment. The southern approach is very hot, so avoid summer days. So the best time is autumn, September and October. But if you want to enjoy the full blossom of Monte Amariana's southern slopes, you need to come early in June. In 2006 we have a very cold spring, so on June 4th only the lower parts (up to some 1300 m) were covered with blossoming flowers.