As discussed in a thread in the Europe Forum we divided the Carnic Alps Mountain Range into five subgroups. The Southern Carnic Alps Group is the fourth group to be posted to SP and is the central subgroup of the whole range. 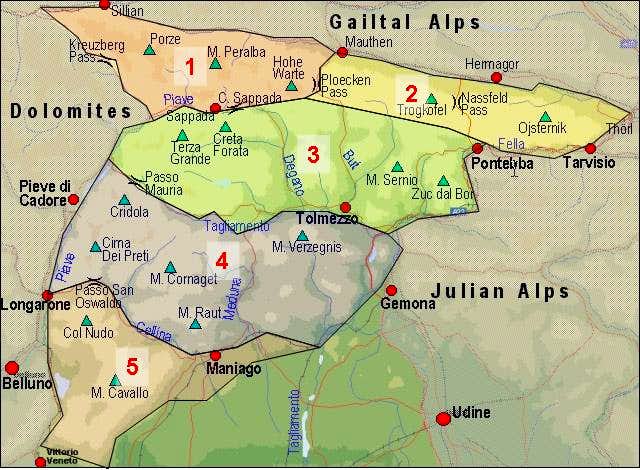 The Southern Carnic Alps on SP

The Southern Carnic Alps stretch over an area of 2100 square km (70km west-east x 30km north-south) and are divided by deep valleys which separate them into no less than eight subgroups. The size and importance of these subgroups varies, however. While (as stated above) the Terze - Siera Group is very important several of the southern subgroups could be termed hills rather than mountains. Nevertheless they will be added here with the following grouping structure:

Below is the interactive map - guidebook, providing a lot of information about the last 4 groups (eastern part). Click on map features and you will get them presented one by one. Red are marked routes, brown are the described non-marked routes. Other trails are embedded into the original OpenStreetMap and can be also trusted to certain degree. (Vid Pogachnik) 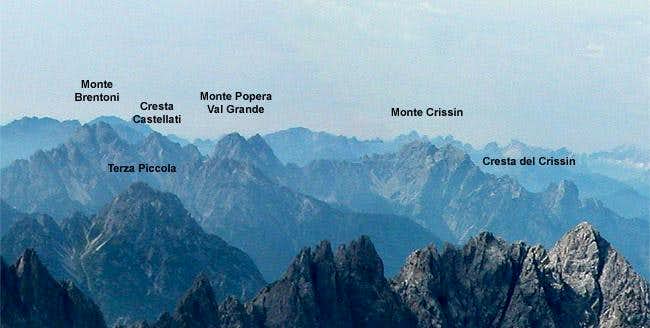 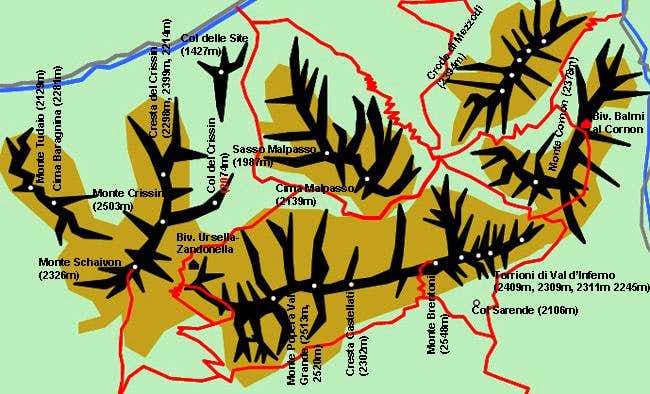 The Group is bounded by the Piave River to the north and west, Val Piova to the south and Val Frison to the east.

Northern Side Ridge (from Monte Brentoni)

Southern Side Ridge (from Monte Brentoni) 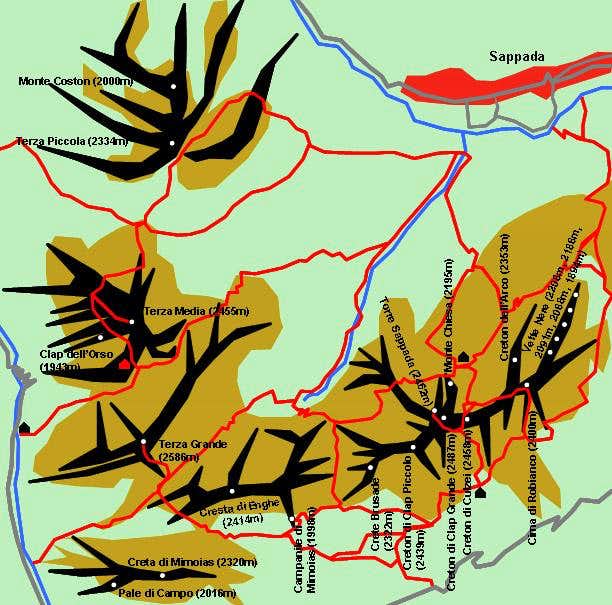 This is the most mportant of the Subgroups of the southern Carnic Alps. It can roughly be divided in two parts, the Terze subgroup to the west, separated by Passo Oberenghe from the long ridge of the Siera - Clap subgroup. All summits are off limits to the casual hiker, you need alpinistic experience to reach them. Two variants of the "Carnia Trekking Trail" cross the group from north to south on both sides of Monte Siera.

The boundaries of the subgroup are: the Piave River to the north, Val Frison to the west, Val Pesarina to the south and Val di Gorto to the east. 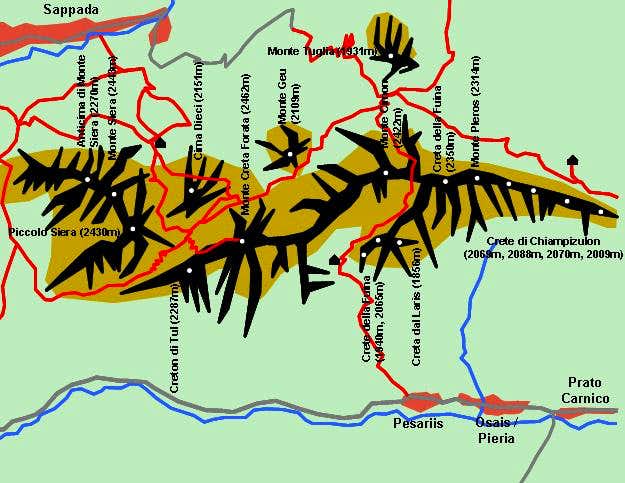 Though one of the lager subgroups the Pieltenis - Gentile Group is of no great importance alpinistically. Except for Col Gentile, which has rocky faces all the other mountains of the group have round summits which can be easily reached. Some of the few trails of the group actually run along forest roads which even reach the summit ridge. The subgroup, however, is very good for lookout-points. Much of the main ridge has an unobstructed view towards the higher and more impressive peaks of the subgroups around.

The group is bounded by Val Pesarina to the north, Sella di Rioda to the west, Val di Laur and Val del Lumei to the south and Val di Gorto to the east.

This is the largest of the subgroups of the Southern Carnic Alps. It is located to the south-west and consists of three distinctive subgroups located around Monte Tiarfin in the north-west, Monte Bivera in the centre and Monte Tinisia to the south-east. On the southern slopes of Monte Tiarfin you can find a number of ski lifts, all belonging to the village of Forni di Sopra. 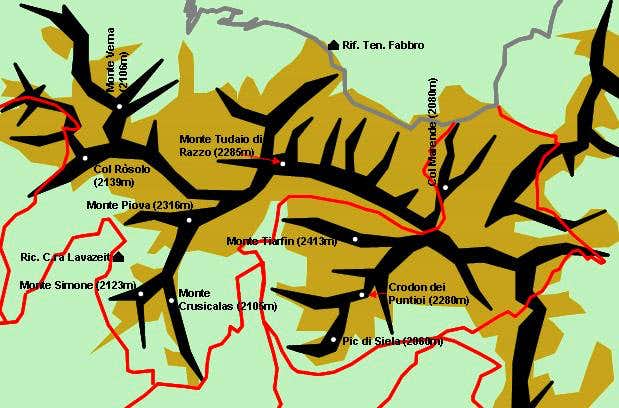 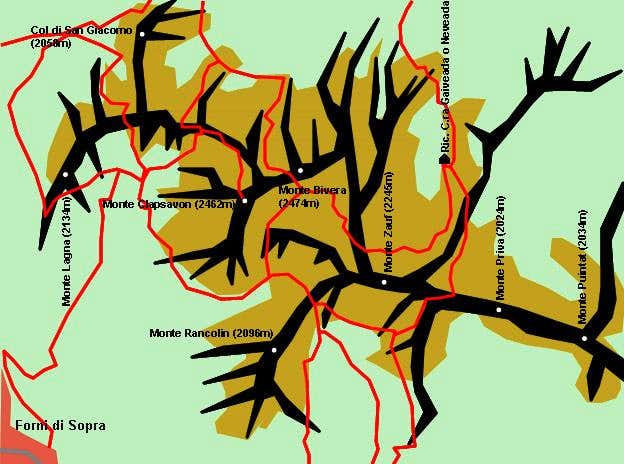 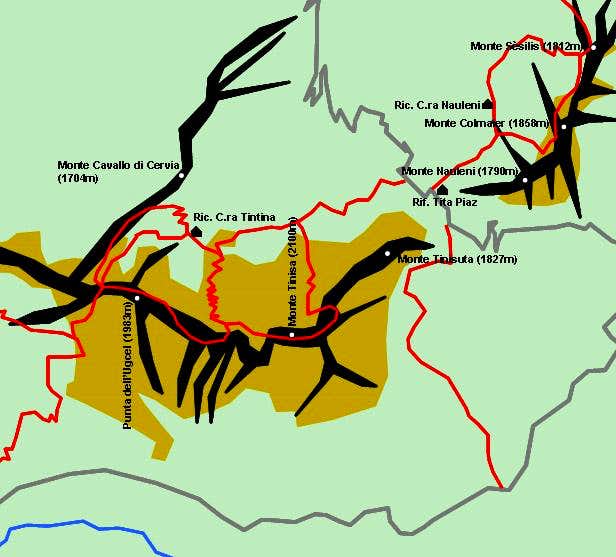 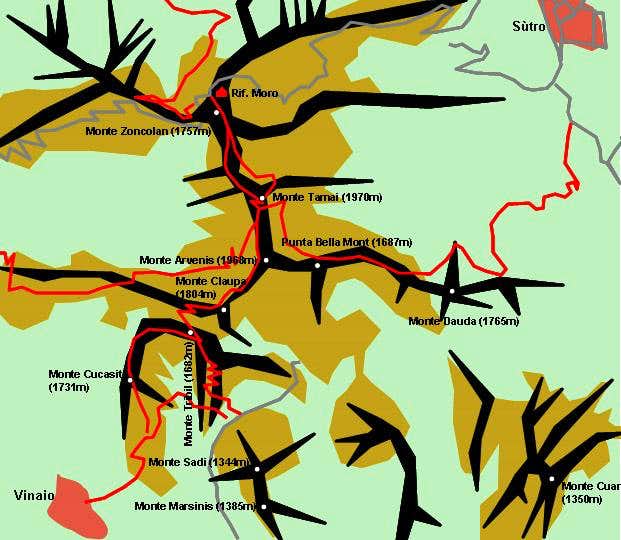 The Arvenis Subgroup is located at the centre of the southern Carnic Alps. It is, however, one of the smallest and least significant subgroups of the range. Apart from Monte Arvenis all you find are rounded hilltops. The northernmost of these, Monte Zoncolan, is a well known downhill ski destination. A number of ski lifts lead up to it from Ravascletto in the north while you can reach it via roads from Sùtro in the east and Ovaro in the west.

The subgroup is bounded by Val Gladegna to the north, Val di Gorto to the west, the Tagliamento River in the south and Canale di S. Pietro in the east. 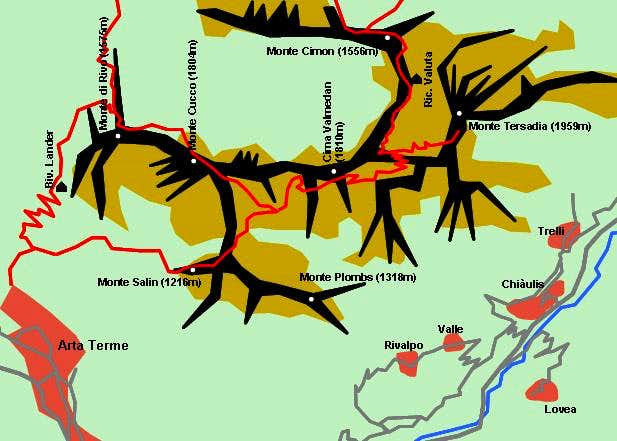 The subgruop which is located around Monte Tersadia is the smallest one of the Southern Carnic Alps. It is also rather low, even Monte Tersadia, the highest mountain is lower than 2000m. Still the subgroup is of alpinistic importance since the main ridge is composed of rocky terrain with high walls (mostly south walls). Also the main ridge forms a horseshoe-formed bend, which is a clear indication of its origin: an atoll in the Thetys Sea, which covered the area in precambrian times.

The Tersadia Group is bounded by Val Pontalba to the north, Canale di S. Pietro to the west, Canale di N Caroio to the south and west. 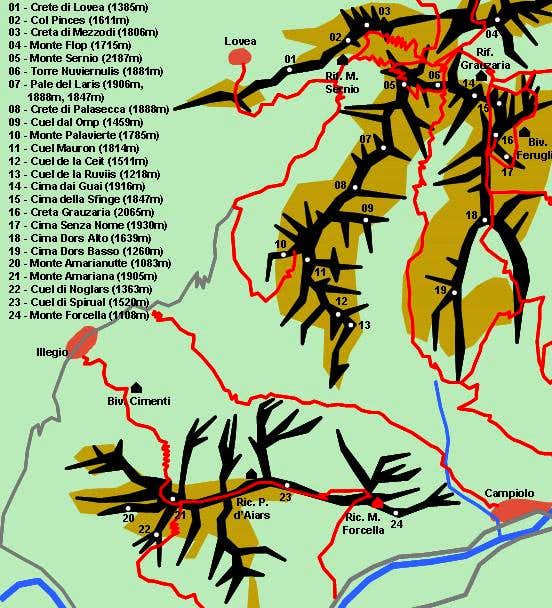 To the east of the Southern Carnic Alps you can find - once again - a number of alpinistically important mountain ranges. The first (westernmost) of these is the Sernio - Grauzarioa Subgroup. It consists of four ridges, two of which (the northern- and southernmost ones) lead from west to east, while the other two lead from north to south. These latter two ridges are the most important ones of the subgroup and their form - seen on a map - reminds you of Scandinavia (Norway and Sweden). Both Monte Sernio and Creta Grauzaria can be climbed with the help of ferrate. A rifugio serves each of these mountains respectively.

The subgroup boundaries are: Forca Griffon to the north, Canale di N Caroio to the west, Canale del Ferro to the south and Val Aupa to the east. 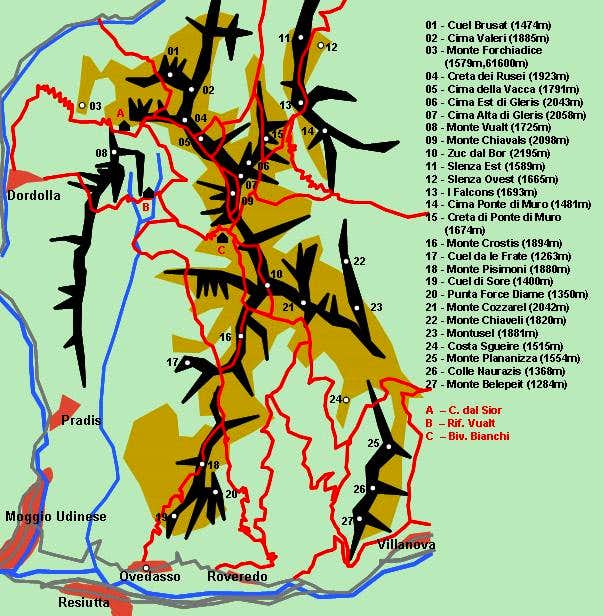 The Zuc Dal Bor Subgroup is the easternmost of the Southern Carnic Alps Groups. It consists of a central mountain, Zuc dal Bor, from which four ridges run in all directions. Zuc dal Bor itself can be reached using a ferrata (Alta Via C.A.I. Moggio).

The subgroup is bounded by Val Pontebbana to the north, Val Aupa to the west and Canale del Ferro to the south and east.

There is no red tape to speak of here. Most parking places are without fees in summer. In winter the parking lots around Monte Zonlolan will be charged.

As usual with most of the mountains of the region the climbing and hiking season is June through September. You can be lucky before and after that but this depends on the overall weather. The Arvenis and Tersadia Groups can be hiked all year round. They are also the only ones which see any ski-traffic in winter.

For up to date weather information follow one the links below.

Look on the following pages for accommodation in the Southern Carnic Alps:

Hi, I think 'Zoncolan' is the correct spelling. Michael

Hi, Gangolf! In the Sernio/Grauzaria chapter you are saying that both these summits can be reached by ferratas. That's not true. There are marked routes, but not protected with a single peace of iron. It's easy climbing II+ (Grauzaria) and II- (Sernio). You might also link in the text, where you list mountains, to the Grauzaria page. Also the ascent on Zuc dal Bor (the last group) is (I think) not a ferrata. Or may be it was. I didn't climb it, but my friend Andrej Masera says, that the route was destroyed during the last earthquake, so it is now UIAA III degree, and so considerably harder than if you say there's a ferrata. Cheers! Vid