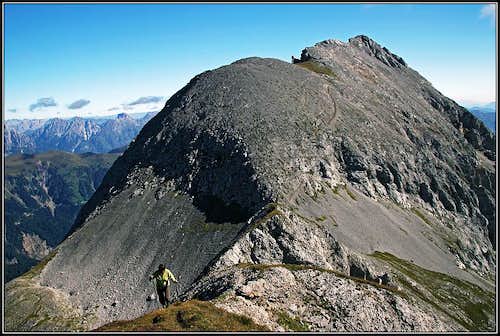 Monte Bivera from the W, from the ridge of Clapsavon

In Sauris dialect the name of the mountain is Veispr/Beispr Kouvl, which would read in German Vesper Kofel = Vespers Peak.

The area of Southern Carnic Alps, lying mostly north of Tagliamento river, is characterized by many distinct smaller mountain groups, or even separate mountains, in adition to a few longer mountain chains on the north of the area. Monte Bivera is a twin mountain. Together with Clapsavon it rises north of Tagliamento river, above the well known tourist town of Forni di Sopra. The mountain itself is made of limestone, but the broader area is geologically more diverse. Monte Bivera's walls are not very high, and because the rock is also not very solid, the mountain is not popular for climbing. Its northern and eastern side are steep and rocky, on the eastern side there are a few picturesque towers in a steep ridge. The southern side is less high, falling down on an interesting high plateau named Pian delle Streghe. The western ridge lowers on the saddle of Forcella del Bivera, 2330 m, where Monte Bivera is attached to the nearby Clapsavon.

The approaches from the south are some 1500 meters high, so the majority of visitors come on top of Monte Bivera from the northern side, especially because the well known high plateau around Casera di Razzo can be reached from three sides by car. But still all roads up there are long. Perhaps Monte Bivera is most beautifully seen from the nice village of Sauris. From there we see its sharp eastern towers a shady nothern face and some long scree streams going down towards the creek bed of Auempoch. Also the high mountain pastures are being exploited by people of Sauris.

The ascent on Monte Bivera is not very hard, neither is it long. The mountain is often visited, but due to the steeper summit slope it is still not the goal just for everybody. Because we can do a nice round tour and because of the great summit panorama, the visit of Monte Bivera summit can be highly recommended.

Clapsavon rocks are sedimentary, created of sea deposits in Trias - Medium (early period, celled Anisico), before some 237-245 million years. So, these rocks are much older than for example dolomia principale or dachstein limestone, and also much more friable. Any climbing in walls is inadvisable.

According to an anciant legend Pian delle Streghe is not just an ordinary plateau. Every Thursday night there gathered the witches from Germany along with those of Friuli and Carnia. As they were passing across the plateau, the grass flourished. It is said that even Lord Silverio (a character of Carnia) stopped by, looking at them.

The People of Sauris

In northern Italy there are few enclaves of German speaking people who many centuries ago migrated over the main chains of Alps. In the past, Sauris valley was a very remote place. The gorge through which the Lumiei creek flows towards the east and then south is very narrow and was hardly passable, on all other sides there were only mostly uninhabited mountain areas. Like in Lessini mountains or in Timau, people in Sauris still talk their dialect and have their own culture. Houses are typically alpine, like in Tyrol they are made of woods and wood cutting is also one of the crafts which are highly developed in Sauris. Today the connection with the main Tagliamento valley is much better, the asphalt road goes through some long tunnels and picturesque galleries. The villages of Sauris developed tourism and today also in winter tourists are coming there for skiing. Otherwise the more humble mountains above the valley are grassy and in the whole area there are many pastures.

From the top of Monte Bivera one can enjoy an extraordinary panorama. The mountain is just close enough to some of the most picturesque groups of Carnic Alps and just remote enough from them that the view is not much obscured by higher mountains.

Let's start with the most attractive part of the panorama, which is for me perhaps the view across the upper Tagliamento valley on Dolomiti d'Oltre Piave and behind them the "real Dolomites". The groups of Cridola, Monfalconi, Pramaggiore and further back to Cima di Preti are a set of wild, picturesque mountain towers, from behind which the high 3000-ers like Antelao, Pelmo, Sorapiss, Marmolada and others are peeking. More towards the north above the nearby Carnic groups we can see Sexten Dolomites. Towards the North the most attractive are the longer chains of Carnic Alps, closest to us are the groups of Brentoni and the chain above Val Pesarina. From behind, as allways in Carnic Alps, the glaciated big peaks of Hohe Tauern are peeking to get some southern sunshine. Towards the East the view is even more opened, as in this part the Southern Carnic Alps are lower and the view flies far to the distant Julian Alps which are closing the eastern horizon. On the south-east some stripes of Adriatic sea can be seen and all the remaining mountains of Carnic Pre-Alps as well.

The most obvious and recommendable point to start the tour on Monte Bivera is Casera di Razzo - a broad alpine meadow in the centre of Carnic region, which can be reached by road from three sides: from Sauris and before it from Tagliamento valley, from Val Pesarina and from Piave river valley. All roads are quite long, but good, except the road above Sauris is occasionally closed because one or two landslides are endagering it. These roads are opened also in late spring, even if on the high area of Casera di Razzo there are no ordinary ski terrains. In May you can find tour skiers, enjoying the fine slopes of the nighbouring mountains, also on Monte Bivera and Clapsavon. Sauris itself can in summer be a starting point, but the tour will be accordingly longer.

The other obvious starting points are trailheads just above the valley of Tagliamento, in the vicinity of Forni di Sotto and Forni di Sopra. From there, the routes on Monte Bivera are a bit longer. 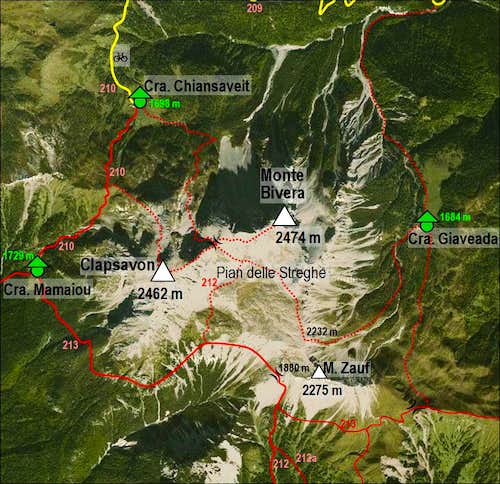 1. From Casera di Razzo, 1739 m. By the mountain road we first go almost horizontally on Casera Chiansaveit, 1698 m. There only the real tour starts. The marked path goes into the steep high valley between Monte Bivera and Clapsavon, then on the saddle between the two summits and finally by the W ridge on top. From Chiansaveit 2 h, from Casera di Razzo 3 h.

2. From Sauris di Sopra, 1394 m. We first descend in the valley of Lumiei creek, 1118 m. There we have two options. The first one is the road on Casera Chiansaveit and ther further on, as described above. The second option is a marked path No. 234 which goes around the eastern side of the mountain. It goes first by the valley of Bosclaf creek, then switches over into the valley of Chiaranda creek, turns towards the west on the saddle 2232 m between Monte Zauf and Monte Bivera and then continues over Pian delle Streghe on Forcella del Bivera and by the western ridge on top.

3. From St. Antonio, west of Forni di Sotto, 832 m. from the main road we go northwards by the path No. 212 or by No. 214, which comes from Forni di Sotto. The higher path later branches, but all three branches finally join below Forcella Rancolin, 1800 m. On the other side of this notch we cross the slopes towards the NW, and then ascend by the path No. 212 up towards the north on Forcella del Bivera.

4. By the ridge from Clapsavon. It is very recommendable to combine visits of both summits into one tour. The order is not important. Those who come first on Clapsavon, will reach it either from Casera Chiansaveit or from the valley of Tagliamento. The ridge down on Forcella del Bivera is on two places a bit narrow and requires some care (See also the page of Clapsavon!).

In the lower part of the mountain there are many more variants of approaches, crossings and round tours. 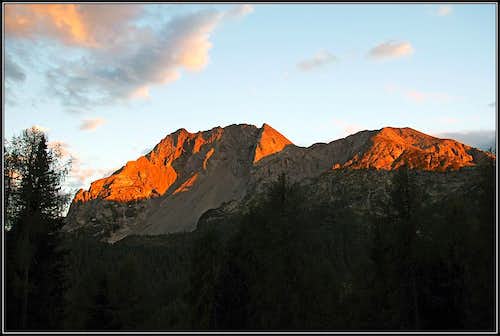 To visit Monte Bivera sleeping on the mountain is not needed. In Forni di Sopra, Forni di Sotto and in Sauris there are many private hotels, higher on the mountain there are shepherds houses, but I don't know if they offer you also to sleep there. As these pastures can be also a goal of simple family hikes you can get food and drinks on some of them.

Monte Bivera can be ascended almost any time of the year, but most appropriate are the months of summer and autumn - from June till the first snow, which can fall here in November. Beautiful is early summer, when all meadows above Sauris are blossoming. Around Casera di Razzo there are broad areas of rhododendron and in the shepherds hut you can even buy a home made liquor made of it. Equally beautiful can be also autumn, when views are more clear.

For tour skiing the months from March to May are appropriate, only that in March and April you will only hardly drive up to Casera di Razzo. The ski tour on Monte Bivera goes from Casera di Razzo. It uses the normal ascent route and is steep and shady in the upper part. In the steep area below the saddle and in the upper valley there is a considerable danger of avalanches. The winter ascent from Forcella del Bivera on top would normally require ice pick and crampons. I would estimate that even skiing is possible from the very summit, but the slope is steep and below us are some abysses which could be fatal in case of sliding. So, only for good ski experts.