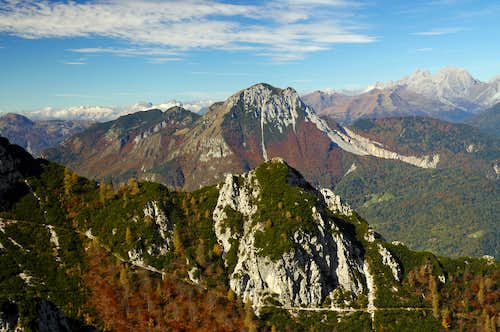 dante - Monte Tersadia from the east 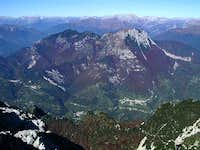 Monte Tersadia from the east

The so called Southern Carnic Alps, or better, the central group of this nice mountain range have in its middle part two subgroups which are less important and attractive, but still offer nice opportunities for hiking and also beautiful distant views. Monte Tersadia is the highest point in its small group, lying between Canale San Pietro on the west, Canale d'Incaroio on the east and south and the valley of Pontaiba on the north. The group consists of the main ridge, stretching roughly in the east-west direction and a few smaller hills south and north of that ridge.

The summit of Monte Tersadia stands on the very east of the main ridge, then towards the west come two lower elevations: Cima Valmedan, 1810 m, and Monte Cucco, 1804 m. The most beautiful side of Monte Tersadia is the eastern one. It is quite high, steep and quite rocky, but not a compact wall. The whole massif consist of many short, rocky crags, due to low altitude mostly overgrown, rather than of bigger walls.

Characteristic for these mountains are also wild, often heavily eroded, big, crumbly ravines, where nobody goes. The german word for those ravines is "plaike". The term means generally slopes where the upper layers are eroded to barren rocks. One such big ravine is descending from the very northern ridge of Monte Tersadia towards the northeast. That is the upper part of Rio Rutandi and is beautifully seen from the northern approach on Monte Tersadia. The other such world of devastation is the ravine which stretches on the western side of the north ridge. That is Rio Maestri, another set of eroded channels and rock pillars. And there are many smaller "plaike" in other parts of the group.

The summit of Monte Tersadia is in a form of a slanted, with dwarf pine overgrown plateau, lowering towards the west. The plateau lowers to the altitude of a bit below 1800 m and only then descends more steeply. The plateau falls also towards the south with short, rocky faces. Around Monte Tersadia once there were live alpine pastures. The biggest and most beautiful one is stil live today. That is Casera Valmedan Alta, 1566 m, lying south west of the summit plateau. On the northern ridge there was Casera Tersadia Alta, 1588 m. Today there is only one hut renewed, now it is called Ricovero Valuta and is supporting hikes in the area. Other alpine meadows are more on the lower slopes of the mountain. 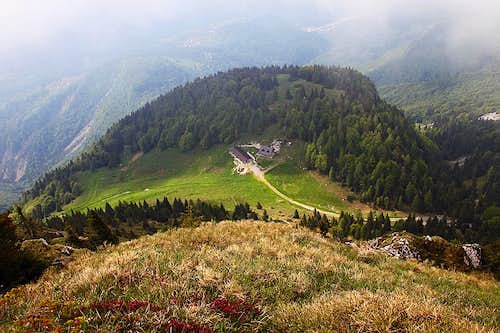 The area is quite remote and rarely visited. Only the highest summit of Monte Tersadia is more popular, mostly due to not long access and to nice views. Especially in early summer the summit plateau and the southern slopes are abundant of all kinds of mountain flowers. So, Monte Tersadia is in the first place a hiking mountain. Those who would like to explore the most remote corners of the area would also for sure find there some real adventure. In winter the massif is more or less empty, although the ascent from the south also in winter conditions should not be too difficult. In good conditions one could also ski there. Finally, the road from Rivalpo up to Casera Valmedan Alta is a popular, but steep and difficult mountain bike track. Usually it is done even from lower starting points, so that one does not have only an ascent and descent there, but also enjoys the panoramic road above Val d'Incaroio.

The Tersadia massif has its base made of early Triassic rocks (called Werfen period, 245-251 million of years ago). Rocks are sedimentary and quite diverse. But the upper parts of the massif are made of a bit younger Serla dolomite (237-245 millions of years old), which is very friable.

The views from Monte Tersadia? Eh, they say they are great. On our visit we had unfortunately only rising clouds, allowing mostly the views down in valleys. For sure the views on Monte Sernio are great. The proud, rocky mountain shows towards Monte Tersadia its most beautiful, on the left almost vertically cut rocky face. Great must be also views on more distant high mountains - around Monte Coglians / Hohe Warte in the Main Carnic Crest and on Julian Alps on the east.

On the western side of Tersadia group, below Monte Cucco (or, to be more precise, below Monte di Rivo, 1573 m), there is a big, eroded ravine (see above the description of "plaike"), above which also many picturesque rock towers can be seen - Campanili di Lander. The marked path No. 408 to visit the area starts in Piano d'Arta. It is called Sentiero Naturalistico del Lander. To reach the most picturesque area, you have some 570 m of altitude to overcome (from 620 m to some 1190 m). Nice is also to prolongate the tour on Monte Cucco, 1804 m. Interesting enough, the remains of a big landslide indicate that before some 10.000 years the whole valley of But was blocked, so that a quite deep lake was stretching up to the today's town of Paluzza.

Here only the two direct ascents will be described. The ascent from more remote Arta Terme visits also other places in the group.

This is a nice, easy hike, which however goes unreasonably around. It is true that along the northern ridge we must do all that distance, but from Ricovero Valuta it would be desirable to find a direct approach on top, which would offer also a possibility of a round tour, descending by the nowadays marked path. Yet the whole tour offers a few nice scenes and you can enjoy unspoiled nature. The path is always comfortable and easy. By the Swiss Hiking Scale it would be rated T2, 3 hours.

On the big curve of the road Paluzza - Paularo, on the saddle near Ligosullo, you can park, or drive a few hundred meters more towards the SW by a narrow road and park near the place where the marked path deters left of the road (a clear sign), some 1025 m. The path ascends first gently, always crossing the slopes towards the right. You just warm up, not gaining much altitude. On some 1070 m the path finally turns sharply left uphills. From there on it goes in long, still comfortamle switchbacks up the steep, forrested slope. On some 1350 m you do the last turn after which (at the first bench) the path again starts crossing the slopes far towards the right. Only in the beginning it ascends some 30 more meters, then it goes completely horizontally towards the SW. Near the second bench there is some mess with marks. You see some of them going left up the steep forrested slope, but there is no path. Locals for sure have an itinerar there, but you should keep walking by the broad horizontal path, what else. Then the path crosses a distinct ravine and on the other side keeps going horizontally. Only on Sella Orteglas, 1400 m, you reach a crossroads, where you turn left (plates). Towards the right the other marked path goes on the nearby Lower Tersadia alpine meadow and further down to Treppo Carnico.

From the crossroads you continue towards the SE, at first ascending by the distinct ridge of Monte Cimon, 1556 m (the forrested peak on the east), then crossing the southern slopes of that peak. The path soon reaches the main northern ridge, just on the place, where you have a fascinating view towards the east, into the wild upper ravine of Rio Rutandi. Make sure not to miss those two meters on the lookout point on the ridge! In continuation the path crosses the steep western slopes below the ridge, but is all the time safe and comfortable. So you reach the Tersadia Alta meadows, above is the big Ricovero Valuta, 1588 m.

The path continues towards the south, then soon towards the south west, avoiding steep, rocky slopes of Monte Tersadia. You expect attacking them, but the path continues comfortably and only below the Pozze water source finally does a few more steep turns, ascending thus on the summit plateau. There the path turns into a well maintained, broad path, revealing its military origin. It continues all the time towards the SW, away from the summit of Monte Tersadia. If you look from the path across the plateau, you will understand why. The plateau is densely overgrown with dwarf pines and due to its karstic nature full of deep chasms, holes and ravines. Don't try without having a clear path there through (if there's any at all)!

After the marked, ex military path reaches the edge of the plateau, 1800 m, a very nice southern view opens. Just below us we see Casera Valmedan Alta and the broad mule track clearly descends there. To ascend the summit of Monte Tersadia, we must take the marked trail which deters left and goes all the time by the southern edge of the plateau. That part of the route is most beautiful. All the time panoramic and in the upper part crossing nice high meadows, full of flowers. The summit is quite far on the east.

From Rivalpo, 908 m, we go by the narrow mountain road to Casera Valmedan Alta, 1566 m. It stands on a nice grassy saddle, from which a comfortable mule track goes northwards, on the summit plateau. As said, the path reaches the plateau on 1800 m, there we deter right and, as described on the previous tour, walk up on top. All the time easy, 410 m of ascent, some 1 h 15 min from the alpine meadow. 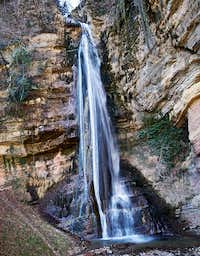 Near Salino village, the local road crosses the creek which just above the bridge falls down the slope in a nice, 30 meters high waterfall. In addition to its natural beauty there are two interesting features of that waterfall. The reddish, yellowish and grey-coloured limestone rocks, belonging to the early Triassic Werfen Formation, are geologically interesting. And secondly, we can observe unusual layers of travertine by the waterfall. Travertine is a light rock, linked to calcium carbonate, dissolved in the water. During the fall a considerable amount of calcium dioxide is freed and calcium carbonate is released from the water and deposited on the rock face.

Monte Tersadia can be climbed any time of season, however have in mind that in winter you will be very likely alone on the mountain. The best months for the two normal ascents are from mid May till the first snow, usually in November.