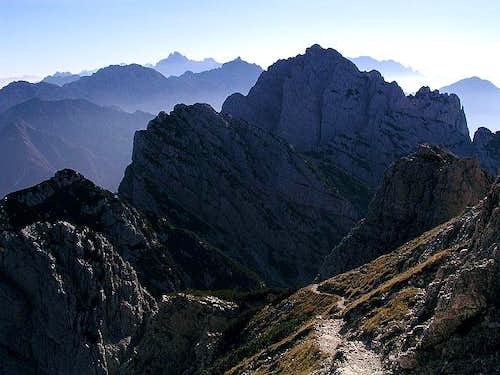 Creta Grauzaria from the West, from the route on Monte Sernio 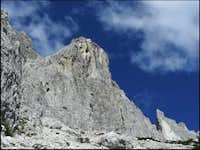 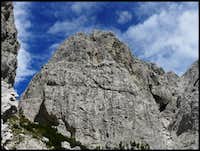 Monte Sernio and Creta Grauzaria. He and she. A beautiful pair of characters in the Central Carnic Alps. He is dominating this small group, monitoring over the broad territory around, she is a hard reachable beauty, all in fine towers and sharp ridges. Both mountains are leading a squadron of lower peaks, stretching like a tail towards the south. And a long and lonesome valley lies between the two.

The summit is made of dolomia principale, similarly as the neighbouring Monte Sernio, Zuc dal Boor and the stretch of mountains towards the mighty Montaž.

The narrow group of Creta Grauzaria consists of many wild summits and towers. North of the main summit stands the famous Cima della Sfinge, 1847 m. Its 650 m high northern wall is one of the most picturesque features of the whole group. The summit of Cima della Sfinge is connected with the main summit with a fine, sharp ridge. West of the big gorge, leading from the north to Portonat notch, the relatively independent Cima dai Gjai, 1916 m, stands. Finally, south of the main ridge the 1930 m high Cima Senza Nome stands. Actually on both sides of the steep valley, falling down towards the south from Portonat notch, a series of minor peaks stands.

Ascents on Creta Grauzaria are not easy from any side. The normal summit ascent is 200 meters of an UIAA II rock climb over the W face above Portonat notch. This nice cut in Grauzaria group can be reached either from the South or, more often, from the north. Around the narrow Grauzaria group, also a round marked path Arturo Ferrucci goes, on the southern part going by Cengle dal Bec (ledge). Even if it is marked, and on some places protected, it is more a climbing route than a path. Seen from the north, there should be very nice opportunities for hard climbing in Creta Grauzaria walls and towers. But I have no information about the importance of the mountain in this respect. Please add information if you have it! In the southern part of Creta Grauzaria group there's a remote area of rugged hills and deep, nice creeks cutting their way through them. There are a few villages which still until today have not the road connection to the rest of the world. Hiking through them is a nice experience.

The panorama from Creta Grauzaria is great. But as the similar panorama was described on the page of the nearby standing Monte Sernio, I don't want to repeat the description here. Just the last sentence: "All in all, hundreds of peaks you have climbed are greeting you and hundreds of those you haven't climbed yet, are inviting you to visit them". 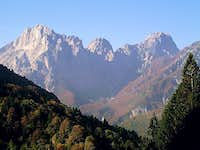 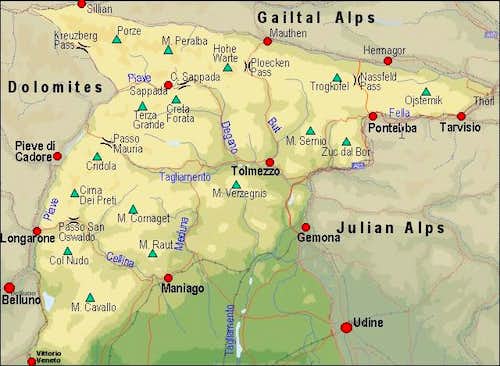 A self-made map of Carnic Alps

For the broader overview see the main Carnic Alps page and the Southern Carnic Alps GROUP page! As Monte Sernio, also Creta Grauzaria is a bit remote to the touristically developed world. Or may be also not so, because not so far away on the eastern side the Udine - Tarvisio highway runs. Even if also the western approaches from Incarojo valley, at the end of which Paularo lies, are not very long, the majority of visitors ascend on Creta Grauzaria from Val Aupa, lying on the eastern side of Grauzaria group.

(Thanks to ganesh70, who added the following information): The Grauzaria group is very popular among climbers, because there are beautiful routes that can be climbed in almost anytime of the year. Here's a list of the most famous:

From Portonat notch towards the North also the ski descent is described. It is steep, but not exposed. If snow is very hard much care is needed, in soft snow conditions the tour is safe from sliding down, but there are higher risks of avalanche and falling rocks. 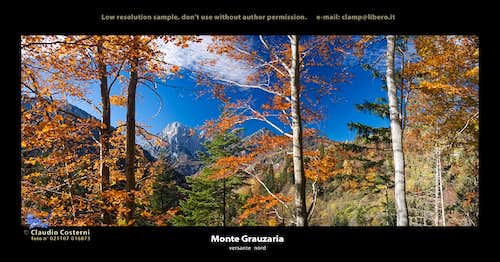 Creta Grauzaria can be climbed any time of the year, but as normal ascents require rock climbing, dry seasons are most recommended. In winter and early spring also the normal ascent would require a complete winter equipment - ice pick and crampons. But on the other hand the gorge, leading from the north to Portonat notch, can be easier to ascend in spring and early summer, when filled with snow.