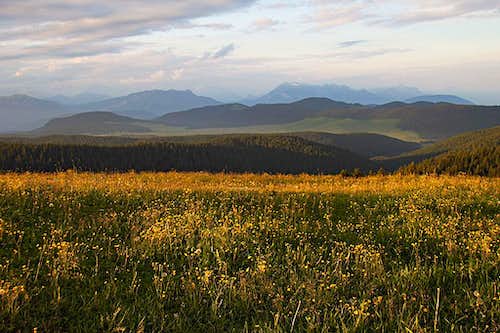 Evening on the main ridge of Melette mountains

Monte Fior from the SW

Monte Fior is a combination of heaven on the Earth and memories on one of the biggest bloodsheds in Human hystory. The nature there is incredibly beautiful. Prealps which are not among the highest, can also be very beautiful. On Monte Fior what is most breathtaking are the picturesque rock formations and the views on gentle, grassy hills all around, with shepherds huts placed on the most picturesque positions.

Being the highest mountain on the southeastern part of Sette Comuni plateau, Monte Fior offer also a very broad panorama. The most beautiful part of it are the high mountains of Lagorai, including Cima d'Asta, and Dolomites, especially the group of Pale and with Marmolada in the background. Nice is also the view on the mountain chain which borders Sette Comuni plateau on the north, with Cima Dodici in the centre.

In early summer Monte Fior and the surrounding mountains are all covered with blossoming meadows. Flower by flower, all kinds of them! I guess that even if the whole area is being exploited as a big pasture, cattle does not reach all those slopes and the abundance of flora stays also during whole summer. At the end - the Italian word "fiori" means "flowers", so the name of the mountain is appropriate.

Last but not least, Monte Fior excells with beautiful, unusual rock formations. Like big bee hives those sediment rocks are encircling the whole massif. The layer lies on the altitude of some 1700 m, so the paths which connect alpine meadows make you feel like hiking through a beautiful parc. For a 200 meters ascent we needed more than an hour and half, having a true foto session there. You just can't continue going on.

The view from below Monte Fior

In some sources the whole mountaneous area is called Melette (by many pastures with this name). They consist of the following elevations: Monte Fior, 1824 m, Monte Spil, 1808 m, Monte Miela, 1782 m, Monte Castelgomberto, 1771 m, Monte Meletta Davanti, 1704 m, Monte Meletta di Gallio, 1676 m, Monte Tonderecar 1673 m. As in the mountaineering sense the whole area is easy - you can simply hike wherever you want - this page will contain more pictures than text.

World War I on Monte Fior

The dark side of Monte Fior story starts with the beginning of World War I. "On these Rocks Of Hell the greatest young men of Europe fought and died", wrote in his testimony of those tragical events Emilio Lussu (book: "Un anno sull'Altipiano" - "A Year On the Plateau").

Monte Fior was held by Italian army, but in spring 2016 the Austro-Hungarian command decided for "Strafexpedition" - the "Punitive Ecpedition" to revenge Italy for changing side in the war from ally to enemy. Some key events were the following:

On the 50 km front the Italian wings stood their ground, but the center yielded and Austro-Hungarian army almost reached the Po river plane near Vicenza. Events on the Russian front however required the Empire to pull back forces and use them on the east. So Italy regained much of territory. On Monte Fior they additionally consolidated positions. Still today you can see miles of trenches running across the slopes, caverns, connecting them, and other remains from the war.

In November and December 1917, after the decisive break-through at Kobarid, Slovenia, the Italian frontline collapsed and the troups had to retreat till the river of Piave. That resulted also in attacks of Austro-Hungarian army on the Sette Comuni plateau. Italian defence was broken and because positions on Monte Fior were cut from the rest of army, they had to be abandoned again. But soon next year the war ended, so all victims died in vain. Today along the trail which encircles Monte Fior an open air museum is arranged. Many tables with pictures and shocking testimonials (like for example the letter of general E. Turba to his wife, one day before his death) are telling the sad story about those events.

Hikes On and Around Monte Fior

In the whole area of Melette there are many other marked paths, connecting points of interest, but let's describe briefly here only those in the very near area of Monte Fior.

From Malga Slapeur the path No. 861 goes towards Monte Fior. Some 20 altitude meters above the hut, when the path passes natural "gates" in rocks, we reach the crossroads. There we decide in which direction we shall do the round tour. Early in the morning it is probably better to go left, in the clockwise direction, because the most beautiful rock formations will receive more sunlight later, when we shall be returning. So, we go by a comfortable path mostly horizontally towards the N and then towards the E, around the hill. On the right we see some nice rock formations. Then the path ascends a bit more steeply on the saddle between Monte Castelgomberto (on the left) and Monte Fior (on the right). The rocky plateau is criss-crossed with trenches and the plates of open air museum are explaining the situation during the World War I. From the saddle it is now best to turn left and go by the bottom of a trench (cleaned for tourists visit) up towards Monte Castelombegrto. We can explore interesting caves, trenches and gun posts, until the trench brings us just on top of the mountain, to the monument of general E. Turba. Then we return back on the saddle by the path left of the trench, which is faster.

From the highest point the marked path continues towards the SE, on Monte Spil and further on Meletta di Fozza. By the hut we turn right and descend gently in a high valley, running just below the layer of rock formations. These are most beautiful here. We cross the southern slopes of Monte Fior and return around the mountain to Malga Slapeur. The whole round tour will take us some 3 hours and is easy (T1 on the Swiss Hiking Scale).

When To Visit Monte Fior? 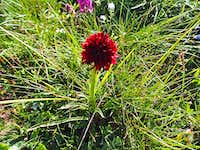 We can ascend on Monte Fior any time of a season, but certainly the most beautiful time is early summer, when the slopes are covered with flowers. In winter mountain roads are for sure not cleaned, but may allow reaching the area on cross country skis on on regular tour skis. Monte Fior is a bit remote, but due to gentle slopes appropriate for tour skiing. Otherwise on the ridge west of Malga Slapeur in winter chair lifts arrive from Valle di Campomulo. The highest chair lift station is just below the summit of Monte Meletta di Gallio.