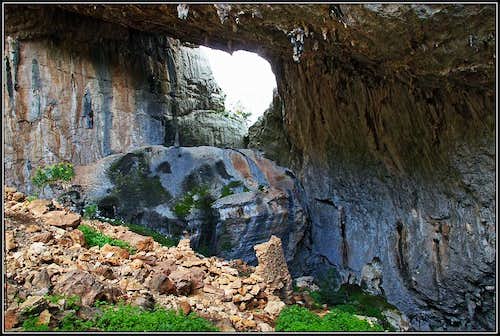 Tiscali chasm
In the wild Supramonte mountains there is a humble calcerous dome which would attract no visit if just below its top there was not a first class archeologic site - a hidden, once fortified Nuraghe village. Otherwise the mountains are limestone, the whole area is heavilly karstic. Despite low altitudes, mountains are rising from the valleys with some steep, attractive walls. The whole area is abundant with caves, sinkholes, chasms and canyons and has even nowadays not been explored fully. This is a great area for adventurers, climbers and also experienced hikers. The nature is still mostly unspoiled, surprising a visitor with rich flora and fauna. From the summits you will enjoy specific, unusual panoramas.

Geographically Monte Tiscali rises between the valley of Rio Flumineddu and Lanaittu valley, closer to the latter. 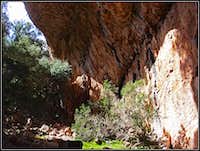 The village remains
Nuraghe people inhabited once the whole island of Sardinia and travelling around you can still today see the remnants of thousands of towers, villages, graves etc. Their era started as far as 2000 b.C. and ended with invasions of Phoenicians, Carthagesians and ultimately Romans. In the "lost" valley of Lanaittu there were several Nuraghe settlements which however held their independence long into the Roman period. The most famous is the village on Monte Tiscali, which was probably inhabited up to the medieval period. After it was abandoned, the memories were lost until some 100 years ago, when the site was rediscovered by local lumberjacks. The two villages were found quite intact, but today only little is left of around 40 houses and artifacts in them. Nevertheless, the place is still today astonishingly beautiful and the scenery boosts visitor's imagination.

Tiscali village originates far back in the prehistorical times, but most of its artifacts are from the period between 6th and 4th century b.C. It is located just below the summit of Monte Tiscali, in a spectacular chasm. The whole underground cave collapsed once, creating a huge crater with vertical inside walls almost all around. The majority of houses was just below the abysses and around a natural window where once also there was an entry into the cave. The whole complex is an ideal natural fortification, offering a shelter to the Nuraghe people against Roman invadors. But life had to be hard in that wilderness, one of the biggest problems was probably enough water supply. Explorations are still underway. From May till September, 9:00-17:00, the entry into the site must be paid. The fee is 5 EUR or 3 EUR (discounted), guidance included. We arrived there before 9 a.m., entered the site, but when exiting, the guard was alread there, charging me, who am allways slow due to taking photos, while Jasmina somehow left unnoticed. 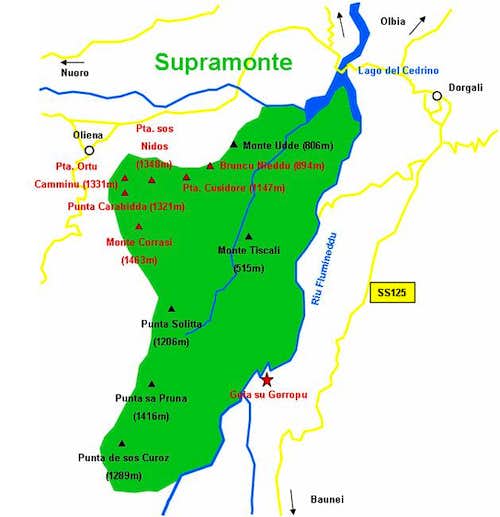 Gangolf Haub - A sketch of the area
Both valleys in which traileads are, can best be reached from Dorgali town, which lies in the mountaneous eastern part of Sardinia. Dorgali can be reached by the SS125 state road, going south from Orosei. Once in Dorgali, you have two options:

1. Lanaittu valley approach. From Dorgali you drive westwards (or from Nuoro and Oliena eastwards) and then towards Lanaittu valley until you reach the Hotel at Sorgente Su Gologone (beautiful, strong water source). From there continue soutwards into Lanaittu valley until the crossroads, where the right road goes to Grotta Sa Oche (cave). Take the left branch and drive until the road becomes too hard for usual cars. Till here you can follow inscriptions (Tiscali).


2. Valley of Rio Flumineddu approach. From Dorgali continue southwards by the panoramic road SS125. Soon after the tunnel which could take you left through the mountain ridge and down to Cala Gonone (beach) you will notice a narrow road deterring right down into Flumineddu valley (on the main road there's an inscription: Tiscali). Descend into the valley and continue by iz (SW direction) until the road gets quite bad. Proceed by it to Ponte S'abba Arva (bridge) after which two cart roads go left an right. The left road goes towards Su Gorropu canyon, while the right cart road goes down the valley (by the left bank) towards a shepherds hamlet (a distinct crag of Monte Tondu above it). You can drive by it some more 800 meters and park among bushes, where the trailhead to Monte Tiscali is (inscription on the table). 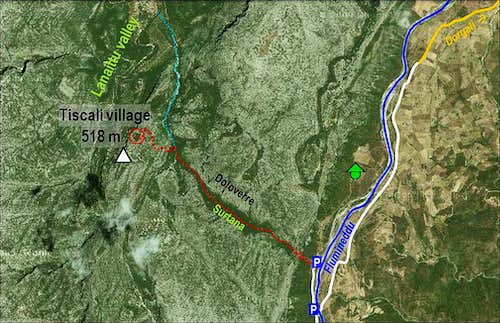 A sketch of the area
Basically there are two ascent routes on Monte Tiscali. The last 150 meters of ascent is common for both of them. The western approach is also possible but goes through wilderness and is not marked.

From the place where you left car, continue by a dry creek bed, following blue marks. In good 30 minutes you will reach the branching, where from the SE the Flumineddu approach comes. (I haven't done this part of the route.) On the tree there is a clear inscription (Tiscali) and the warning that the entry to the village must be paid. From then on you follow red triangular marks. The path winds in turns towards the west and north-west, you pass a picturesque cave and quickly gain altitude. Some 150 meters of ascent are strenuous, but not dangerous. Just some secure step is required and if you are with children, take some care of them. Above, the path reaches a panoramic balcony and soon behind the corner the entry into the village.

From the parking place above the Flumineddu river you follow a well marked path up towards the north-west. The steep ascent brings you after some gained 200 meters of altitude into the beautiful S'Iscala e Surtana (Surtana gorge). The valley is cut into the mountain ridge in the SE-NW direction, steep walls are rising on both sides. Especially the walls on the right (Doloverre) are almost vertical, and are very popular with classical climbers (they usually sleep in tents down at Flumineddu river). After good 1h (at the end of Surtana gorge we descend some 70 meters) of walk we reach the crossroads on a clearing where the Lanaittu ascent comes up. There turn left and as described in the previous paragraph, ascend in less than 30 minutes to Tiscali village.

The whole area is part of the Parco Nazionale del Golfo di Orosei. Leave no traces after your visit.

Camping in the valley of Flumineddu river is forbidden. I am not aware of specific regulations, but due to remoteness I guess nobody will chase you if you set up a tent at trailhead over the night. We slept in car near Ponte S'abba Arva (bridge) and next morning found on the trailhead above Flumineddu river a group of climbers sleeping there over the night in a few tents. Otherwise the nearest tourist facilities are in Dorgali.

Because the whole hike will not take you more than 4 hours, you don't need to sleep in those mountains, unless doing more treks in the area.

Monte Tiscali can be best ascended in snowless periods of a year. In winter the approach roads might be inpassable. In summer the ascent can be hot, so take enough water with you (no sources on the mountain) and be early.