Mount Ruapehu is the highest volcano on the north island of New Zealand. Its volcanic status is currently active and the most recent major eruption were between 1995 and 1996 with additional activity in 2007. A lake currently sits over the vent, changing in nature and hazard level with mood of the volcano. Along with Ruapehu there are two other active volcanoes in the Tongariro National Park, they are Tongariro and Ngauruhoe. They form part of the extensive Taupo Volcanic Zone which runs up to White Island and beyond.

Ruapehu has wide mixture of climbing and tramping challenges and can be visited all year round. From round the mountain tracks to ice climbing there's something for everyone. Accessing the crater and the lake within is achievable for most people via one of several routes with the highest of the many peaks on the rim, Tahurangi, a more technical challenge. The journey up and views from the top are quite breath taking, including views all the way to Mount Taranaki/Egmont on the west coast.

Despite the volcanic hazard, Ruapehu has three ski fields, Turoa, Whakapapa and Tukino that typically operate from June to October and are the prime destination for this activity in the North Island. The infrastructure developed for the ski industry has also made exploring other opportunities on the mountain more accessible and form the main access points for tramping and climbing also. This wide ranging popularity and focus has led Ruapehu to often being just referred to conversationally as "The Mountain".

The Department of Conservation (DOC) website has excellent resources covering most areas of interest.

When to Climb and Red Tape

The mountain can be visited year round depending on interests, experience and road access/conditions. Due to the southern hemisphere location December through February are the warmest months and June through August the coldest. There will usually be at least some snow on the top of the mountain year round, with the least in perhaps March/April.

There's a lot of easily accessible avalanche information available for the park (during winter) as well as weather forecast information. You can also call the ski centres to get updates from the ski patrollers. Mobile phone coverage on the mountain exists.

There are no particular restrictions when visiting the mountain for your average visitor. The general ethos is New Zealand's national parks is that you're responsible for your own safety. While search and rescue teams do exist along with availability of various comms equipment it's not something to rely on per se, i.e. don't get into a bad situation on purpose. Check with the local DOC if in doubt/with any questions.

However this will vary if there is heightened volcanic activity at Ruapehu. The impacts may be keeping a particular distance from the crater lake to staying off the mountain entirely. Check before you go with GNS and the DOC. Also see the Volcanic Hazards and Activity section below.

Ruapehu is a big mountain with an infinite number of things to do and ways to go and pointy things to head up. Listed below are a few examples including the most common (easiest) routes. Additional information particularly on more complex routes and to other parts of the mountain can be found in the Resources section below. There doesn't seem to be much in the way of easily found information on technical routes specifically in summer unfortunately beyond references to "lovely/blocky scrambling" though there are a few potentially useful photos around on different blogs, there are some assorted links for those in Resources also. While the DOC does provide route information on summiting Tongariro and Ngauruhoe, their information on Ruapehu is limited to the easiest route to the crater and lake view, not the high point/true summit, Tahurangi, which is a technical route any time of year.

In addition to the high point Tahurangi (2797 m), there are a number of other prominent peaks at the top of Ruapehu, each with a large number of their own routes. Several may be taken in during a traverse of the mountain or as a crater circumnavigation for example. See the Resources section below for further information. These peaks include:

Crater traverse / Tahurangi (2797 m) - ONLY IF NO VOLCANIC HAZARD WARNINGS! Continue past the Dome Shelter and skirt round the west side of the lake (be careful re. hidden crevasses) before heading up to the Summit Col between Te Ataahu and Tahurangi (north facing, snow may be very soft). Then depending on the season judge the best way of heading up to the summit by either heading straight up the West Ridge (steep with or without ice, NZ alpine grade 1+ or 2, class 4-5 scrambling ?, useful photo here) or heading SE and across to Skyline Ridge and up on to it where possible. Looks to be roughly 2 km to cover from the Dome to the summit, and 2 km back again. Ease of this will vary with the time of year as it can be cliff like at points but is generally rated as NZ alpine grade 1, i.e. you probably don't need a rope in winter unless there's a glacier/crevasse risk which there may be, see above but again may be a steep scramble if there's no snow.

There are several places to start these route, e.g. Blyth Hut (1380 m), the Turoa ski field parking lot (1623 m) or the top of the highest ski lift (2,322 m) depending on time/weather/inclination. You can get a special Mountaineering Pass from the ski centre for NZ$30 or so if you want to ride the lifts and skip some ascent/descent.

While there have been large magmatic eruptions at Ruapehu from time to time, one of the most common hazards is the water in the crater lake. On a number of occasions the lake has filled behind tephra dams which have eventually collapsed allowing the lake to drain catastrophically as lahars. Hydrothermal or phreatomagmatic eruptions have also produced the same effect. While on the mountain these are probably what you want to be most aware of the risk of aside from the usual climbing related ones.

A selection of recent events: 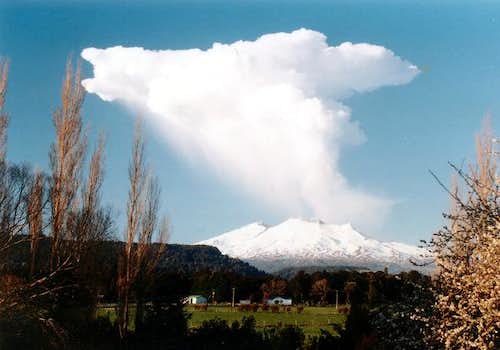 1953: A massive lahar went crashing down the Whangaehu River with no warning following the failure of a tephra dam holding back the crater lake. This dam had formed during the prior 1945 eruption. Sometime around 10:15 p.m., the lahar which was filled with ice, boulders and tonnes of water crashed into the weak old concrete pylons of the Tangiwai rail bridge, significantly weakening it just as a train was coming. A young man named Arthur Cyril Ellis tried to warn the driver by waving a torch at the train. The train applied its breaks but not nearly soon enough and the train's weight caused the bridge to collapse. 151 people were killed.Source

1995-1996: The most significant activity since at least 1945. Following almost a year of precursory activity, explosive activity occurred in August-October 1995 and repeated to a lesser extent in June-August1996. Large dramatic plumes were formed which spread to other parts of the North Island, impacting farming, air travel and hydroelectric plants. Lahars also occurred in different parts of the mountain. This activity led to further development of lahar and dam monitoring systems which had begun after the events of 1953. Source

2007: Earlier in the year a lahar formed as a result of a tephra dam collapse, the dam being generated by material from the 1995/1996 eruption sequence. Six months later a short duration explosive eruption occurred which deposited tephra around the summit region and generated lahars on the Whakapapa side. Damage was caused to the Dome shelter, injuring an occupant in the process. Source

Recently: In the years since and as recently as early 2015 there were some fluctuations in the crater lake temperature with the alert level currently set at 1 (signs of volcanic unrest). Source

Camping and Other Accommodation

There are multiple camping opportunities in the area, either provided by the Department of Conservation or private entities. Some suggestions are listed below:

Contact the local DOC about camping outside of designated campsites. Camping in the crater is discouraged and is also hazardous from a volcanic point of view.

Accommodation options can also be fancier, for example on the Whakapapa side at the base of the mountain there is a well known and distinctive hotel called the Grand Château. This place has many features including tennis, a nine hole golf course, a cinema, heated pools and a gym.

In addition there are several huts on the mountain which are either run by the DOC for tramping purposes (there a Round the Mountain track) or run by clubs of the climbing or snow sports variety. You may be able to stay in them by contacting the relevant organisations.

There are plenty of outdoor shops in New Zealand as you might expect with different customer type focuses. In my experience Kathmandu usually have the least technical stuff, followed by Macpac, with Bivouac and Living Simply (Auckland) more likely to have climbing related things and the staff experience to go with it.

"As for climbing the mountain the most common and simple ways of climbing it are simply walking up past the two ski feilds. Not a hard mountain to climb." Most visitors ride the skilift, then make the short hike up to the crater rim or the shelter overlooking the crater lake. For serious climbers the volcano has much more to offer. The true summit can be accessed by crossing a glacier sitting on a very active volcanic rift. The slide zone of the glacier ends in a 20 meter plunge into a glacier lake. Finally, the true summit can only be accessed via a full pitch of 4th class to easy 5th class rock climbing. There are other interesting peaks and spires scattered about the upper reaches of the volcano as well.

Hi there, I've recently updated the page some. It would be useful to know a bit more about more specifically where the 4-5th class scrambling is, say the West Ridge for example? The Crater Face route initially looks like it would be higher rated than that though you also mention in you log that you down climbed that. Thanks.