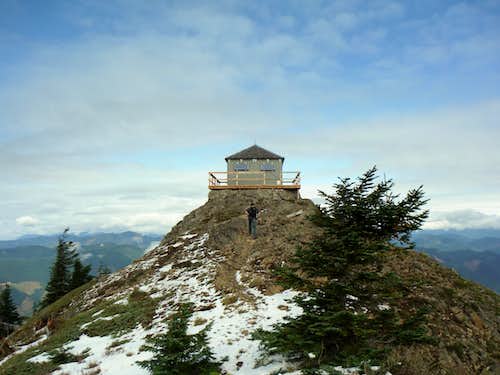 Kelly Butte is one of the more famous lookout tower in Washington State. The actual mountain is moderately popular despite being in a remote area of the Cascade Mountains and only being reached by forest road. It is highly recomended that a high clearance vehicle is used to make the trek to the trailhead. It has one of the better views of Mount Rainier in the state and is a very popular hike with families. At 3.5 miles roundtrip and under 1000 feet of elevation on now a very well maintained trail many average hikers can easily make the summit in under an hour and slower hikers can make it in under two hours. 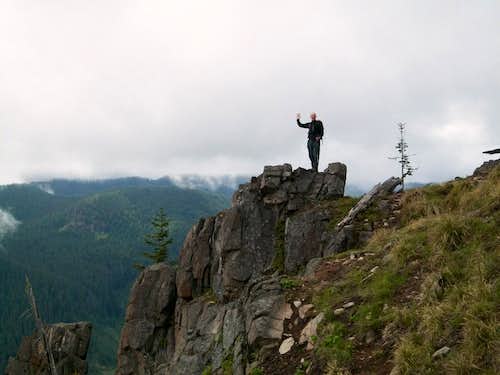 Bryan on one of the nice outcrops on Kelly Butte

With the new section of the trail up to Kelly Butte this trail is a very easy YDS Class 1 trail to the summit. This is though a recent addition that has happen in the past three year. Beforehand you had to go up a Class 3 gully with a fixed rope on it for full support to make sure that you did not kick rock on someone below you. The rope used to be the standard way up the mountain and is still an optional way up Kelly Butte which I personal like to do when ascending the mountain. It will meet up with the new trail 250 feet up the mountain. 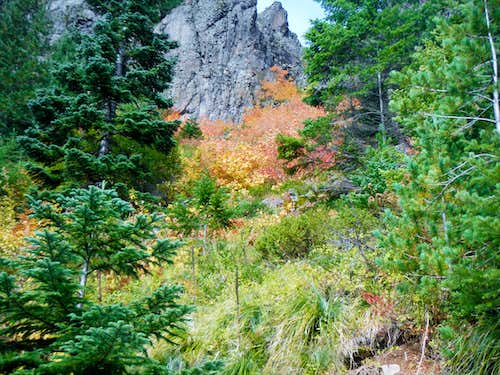 Vine Colors nestled among the rocks!!

As for the lookout for the long time the lookout was in serious disrepair. But in 2007, thanks to Bob Adler and of the volunteers who have helped him, the lookout is in the process of being repaired. One of the major steps happened in 2007 with the roof being put on Kelly Butte. The lookout has now been done and is has been in good shape since 2011. I want all of them for there hard work on renovating this gem. 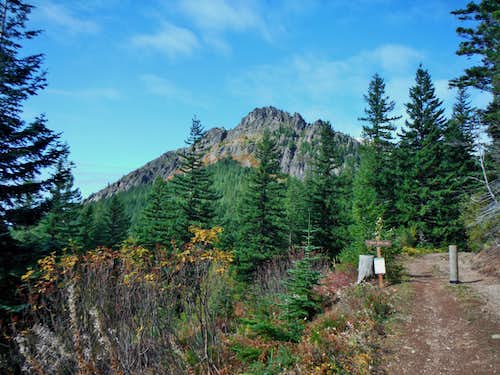 Kelly Butte from the trailhead

From Route 410 in Greenwater: Just south of Greenwater turn east on NAD 70 and stay on it roughly 7.5 east. Stay on the road until you run into NAD 7030 where you want to head north (left) and follow the road as it rises up all the up to a gap where there will be a T way intersection. You want to head left and stay on 7030 all the way to Kelly Butte. You will pass another intersection where you will want to veer right onto 7030. Take it all the way to the end this will roughly be 9 miles. The road used to have tank traps but those have been filled and now normal passenger vehicles can drive to the trailheas

There is no red tape at the trailhead. 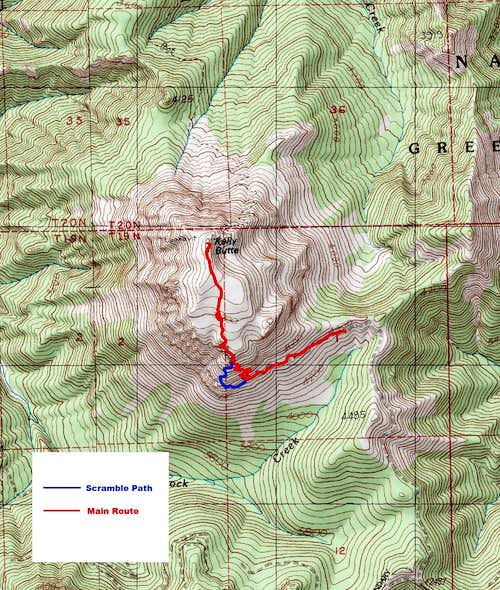 Kelly Butte has two routes to the summit. There is the older route. This is the route that is a little steeper and actually contains a rope on the tougher section of the hike/scramble. That section is no more than low Class 3 at greatest but because of the loose soil many find the rope helpful as they ascend through this section. The exposure on the rope section is not really that great and there is a good run out in case a fall occurs. It should be noted that this rope should only used as help and not as something to lean on. The rope is heavily damaged and should be retired soon. The old route does run into the new route a little ways up the trail. 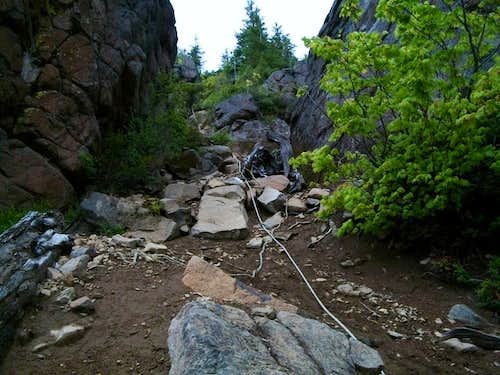 The new route is much more mellow in that it doesn't contain any sense of scrambling. This newer trail traverses through the cliffs bands at a relatively comfortable fashion through a series of well placed switchback. Once it is done ascending the steeper sections of Kelly Butte the trail then moderate through a field of berry bushes and stays at a constant pitch all of the way to the summit lookout tower. It should be noted that both ways are full of good views and are equally enjoyable in their own ways.

Camping is allowed at Kelly Butte at the lookout. Please call the Enumclaw Ranger Station at  360-825-6585 to see if there are any closing before you go up there or if there are any volunteers up there.  Please though respect this special gem and leave no trace here. There have so many man hours to replace this special lookout and I would hate to see this place vandalized again.