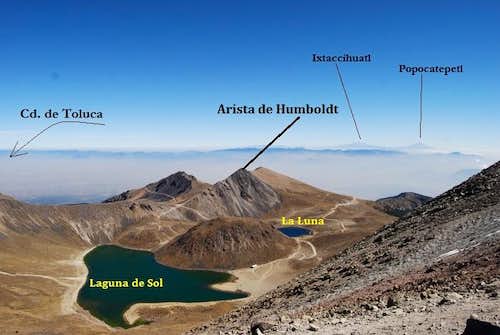 The volcanic crater of Nevado de Toluca (Xinantécatl in the native) is a large but extinct stratovolcano. There are many named points along the rim and two brilliant lakes at the bottom. It can be a bit confusing regarding the naming. The whole of the volcano is typically referred to as Nevado de Toluca, taking its' name from the nearby town of Toluca only 28 miles (45km) away. The highest point along the crater rim is Pico de Fraile (Friar's Peak) at 15,354' (4.680m). The second highest point is Pico del Aguila (Eagle's Peak) at 15,223' (4.640m). And the fifth highest highest is Arista de Humboldt at 14,071' (4.290m)

Arista de Humboldt (roughly translated as Humboldt's Ridge) lies almost directly opposite the high point to the east. It is most frequently accessed via the meteorological station located outside the crater rim to the northeast. There is a pretty good trail (albeit dusty!) running up from the station to the saddle overlooking the crater. The views down into the crater unfortunately, are somewhat blocked by the large but old lave dome in the center. But Picos de Fraile and Aguila are still quite visible.
From the saddle, Arista de Humboldt is located hikers left up the moderate but gentle ridge. A social trail exists to the summit. Humboldt is a gemini summit. Both summits are nearly identical in height but the first one is slightly higher.
Difficulty speaking, only expect class-2 (American). UIAA is I believe grade II.
Of the two lakes at the bottom, the larger, Laguna de Sol is deeper and has trout. The smaller is Laguna de la Luna (Lake of the Moon). Fishing and diving are sometimes done but permits are necessary to do so. These can usually be obtained down in Toluca or in Mexico City.

At 208 sq. miles (540km), Parque de Nacional Nevado de Toluca isn't Mexico's largest but it has existed since 1936 to protect the areas lower forests and fragile alpine. The lower forests contain rabbits, badger and ring-tail cat, fir and pine trees. The lakes are among the highest in the western hemisphere. Today, the biggest threats to the park are from illegal logging, clear-cutting from locals making way for crops and trash (pollution). There's been inconsistent negotiating and planning for years to downgrade the park to a regular protected status. This would make things, strangely enough, easier to compromise with locals in the surrounding communities about land use. But I find it odd that even having that National Park status doesn't always guarantee protection...at least not in Mexico.

Let me just say this, driving in Mexico City is 120% offensive driving. If you drive cautiously and carefully, yielding to everyone just to "be nice," you will never reach your destination. In a city of roughly 22 million people, I can grant a lot of leniency to the drivers and road conditions; but holy sh*t! Even New York City isn't this confusing.
If you decide to hire a car, be aware, plan your route before you go and try to get out of the city as quickly as possible. Since Humboldt is part of Nevado de Toluca, these driving directions are essentially for Toluca. They come from parts Secor's book, Google Earth and memory.

Via Car: From the city center, follow Avienda Constituyentes west until it merges with Paseo de Reforma. There are a ton of other streets and avenues you can take out of the city but these are going to be the most expedient. Merge onto Paseo de Reforma (#15D) heading southwest. Keep following state highway #15D. Eventually, you'll want to merge (this one is easy) onto Mexico Marquesa Autopista. Be aware, this is a toll-road. The toll is M$50.00.
Stay on #15D. You'll know you're on the right road if you pass side streets such as: Carreteria Mexico-Toluca and Arteaga y Salazar. Stay on #15 for about ~26 miles (42 km).
Before you reach the actual city center, turn left (south) and take the Avienda Paseo Tollocan (#55). After 6-7 miles (10.5 km), turn left onto highway #134 (Paseo Colón). Note that after 1.2 miles (2 km), the road will dog-leg sharply right. It is here that the road becomes renamed into, Del Pacifico. Just make a mental note of it.
After you drive for 11.2 miles (18 km) look for highway #10 on the left side (Carretera La Puerto-Sultepec). Turn left here. There are also signs along the way indicating the national park and volcano (Toluca). Stay on this road. The road will eventually give way to gravel and then rough dirt. There will be a few impromptu shacks set up along the way that locals use to sell food. The road will wind its way up the side of the volcano for roughly 15 miles (24 km) to the crater.

The entrance is roughly 28 miles (45 km) from Toluca and 84 miles (135 km) from Mexico City. It is possible to stay in the hostel for about M$100 (about $9.00 USD) per night. The daily parking fee is M$5.00 (about .15¢ I think). From the park entrance, the road winds up through dusty forest for 2.1 miles (3.5 km) to the main gate.
Park staff (when on duty) don't take too well to campers outside the gate if past hours. I've heard of folks being charged as much as M$100.00.
Also, weekends are typically extremely busy. Arrive early if you're day-tripping the mountain. 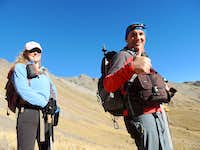 There are a few options available if camping or staying within proximity of the crater. All are very affordable.

The best time to climb is during Mexico's dry season. This ranges from mid-November to March, sometimes as late as April. Thinking of climbing in terms of seasons (winter-summer-fall-spring) may work well for peaks and such further north but in south central Mexico, think instead, more in terms of wet and dry seasons.
This is high altitude. Do not take good weather for granted. Inclement weather can and will move in quickly without warning making the crater rim a precarious place to be. These peaks/points can be climbed at any time of the year but heed prudence and leave early [in the morning] and descend early if possible.

I know one thing that’s always on the mind of travelers to Mexico is safety. Some areas, primarily the northern deserts like Sonora and Chihuahua are at least in my mind, strictly verboten until the cartels can be reined in. But further south in places like: Mexico City, Puebla, Guadalajara, Toluca and smaller towns like Amecameca and Tlachichuca, most crime will consist of theft. In all my years of traveling and climbing through Mexico, I have never been a victim of theft or other. And I typically go out of my way, if I can, to peruse the smaller shops, bazars and practice my Spanish on the locals. That’s not to say YOU won’t of course, but adhering to common sense I believe goes a long way in prevention.

If you have to pay someone a few extra pesos to watch your gear while on the mountain and a few more once you return, so be it. Perhaps a promised larger fare to the taxi if they take care of you and pick you up once you’re down to guarantee you won’t be hitchhiking, is worth it. They’ll appreciate the extra money and you’ll appreciate not having the stress or headache of getting back to town. Just be sure to make good on those extra pesos/dollars. Reliability and respect can be understood cross-cultures.

Do not EVER drink the local water or use ice made from it. I won’t even drink it even if they say it’s been filtered. Drink ONLY bottled water or bring a Steri-pen for back up.
And remember, getting someone to smile or laugh, whether intentional or not is worth its weight in gold. It creates instant amiability and rapport. These are the three rules I live by when in Mexico. They have yet to fail me.

Looking towards Humboldt from the crater floor