Brooks is the closest of the Plateau mountains to BC Parks’ Paradise Meadows trailhead and is a familiar sight to the thousands of skiers who visit Mt Washington Alpine Resort every year. Ask them about it, however, and they probably couldn’t even tell you its name.

Unheralded and mostly overlooked, there’s little in the way of a trail up Allan Brooks and even less in terms of route details. Probably for this reason, the mountain receives few visitors and those that do come usually visit in winter on skis when the bush and deadfall is covered and the going less obstructed.

Little regarded or not, Brooks has a few pleasant surprises in store for the occasional summer visitor. While there’s plenty of forest to get through it’s almost completely open and there are also several sub-alpine draws along the usual south ridge approach to the summit. Nearer the top the route unexpectedly crosses two limestone boulder fields before reaching the summit cairn. In fact an earlier name for the mountain was “Limestone Ridge”.

The most unexpected and pleasant surprise, however, is the views. From below the summit looks to be completely treed. In fact the summit cairn sits directly above the steep drop-off to the Goss Creek valley below and commands an uninterrupted view right across the west part of Forbidden Plateau to the high mountains that border the Eric/Ralph River watersheds, Mt Albert Edward, Mt Frink and Mt Regan amongst them.

The summit of Brooks just pokes its nose into the high alpine zone. To the north of the cairn is a small flat alpine plateau that seems completely out of place. A little “alpine island” amongst all that forest - again, with lots of limestone in evidence.

Allan Brooks (1869-1946) was a renowned naturalist, ornithologist and artist. Brooks travelled extensively throughout western Canada and called many places home but he spent at least part of every year at his home in Comox, doubtless birding in the area around the mountain that now bears his name. Brooks was also a well known and avid hunter and gun collector. Given modern attitudes towards such things, I wonder if Mt Brooks might be called something else if it had required naming today. 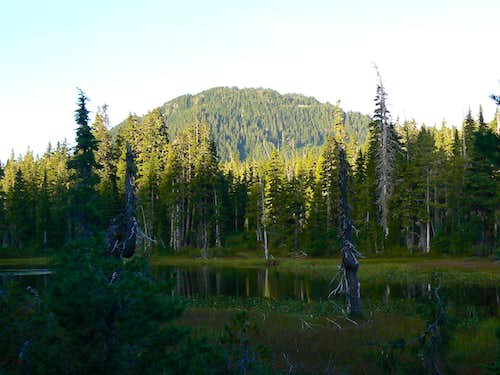 Parks have established a new trailhead and information booth right beside the lodge. If you get back from your trip before 5.30 pm, the Raven Lodge has a lovely view over to the mountains – particularly to Mt Brookes - and is a great place for an end of hike libation.

Head out from the Paradise Meadows trailhead across the groomed trail and boardwalk onto Paradise Meadows. Reference to this map illustrates the route to Lake Helen Mackenzie. Easy trail takes you to the north shore of the lake in about 45 minutes.
Go right at the trail junction and proceed on rather less well maintained trail around the west side of the lake until in 35-40 minutes you arrive at the point where the route starts to climb up towards the pass between Brooks to the west and Mt Elma to the east. There are two options at this point.

2.If this doesn’t appeal carry on up and over the Brooks/Elma pass to N49 42.456 W125 20.047. Again there is nothing to mark the spot but there should be a wet meadow to the right of the trail in your direction of travel. Leave the main trail here, cross the meadow west and continue west into the well spaced trees. Head up-slope – always west - and to the right of a bump in the ridge ahead. As you contour around the bump you should encounter a faint boot path for the first time. Follow this, or if you can’t find it, head north into the open meadows and aim for the waypoint noted in 1 above.

As you approach the summit, the route crosses two gullies that split the ridge east/west. Above the second gully is the unexpected limestone boulder field that precedes the final few metres to the summit. The summit is about an hours travel from either of the points at which you leave the main Plateau trail.

The summit cairn has been built a little below the true high point in order to take advantage of the views to the west described above. It has a nice new (2005) wooden plaque provided by the Comox and District Mountaineering Club but no register that I could find.
Don’t forget to walk north from the cairn and onto the “alpine island” over there and then a little further to the steep drop-off down to Lake Helen McKenzie and the Piggot Creek valley below. Look across to the ski runs on Mt Washington from here.

Reverse either of the options above to return to the main Plateau trail. 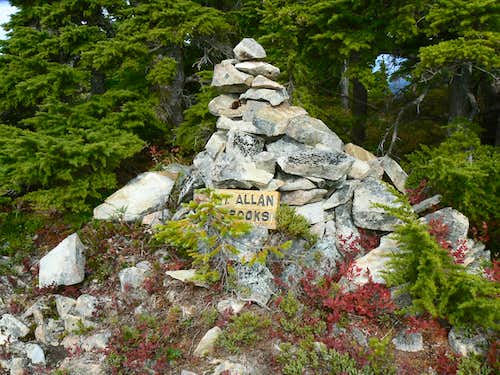 Mt Brooks summit
As always a MapSource/Garmin tracklog is available for the asking for the approach and summit routes. Just send me an email or PM.

If, for some reason, you decide to camp on this trip there is a $5/person/day fee for any of the sites in the so-called core-areas of Strathcona Park. There is a self-registration box and payment slot at every core designated trailhead. Payment can be by cash or cheque. Fill in the payment form before you leave and take the receipt slip with you.

With Mt Washington just 3 kms away, there is cellular coverage just about anywhere on Mt Brooks from which you can see the ski runs.

In core-areas of Strathcona you must camp in designated areas only and the nearest approved campsite for Mt Brooks is at the east end of the north shore of Lake Helen McKenzie.

Note that fires are strictly prohibited, so you must pack a stove. Bear and cougar frequent the mountains and forests of Vancouver Island, so proper back country methods – isolating food bags, cleaning up all cooking scraps, good toilet practice etc – are essential. All of Parks’ designated core area campsites are now equipped with metal box food caches. Giardia is well documented throughout Strathcona Park, so boil or treat all water. 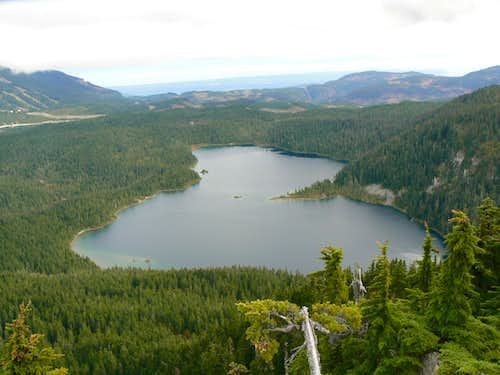 Lake Helen McKenzie from Mt Brooks. Designated camping at the head of the lake.

Check the weather at altitude right from Mt Washington’s webcam