Mount Frink is a satellite of Mount Albert Edward and lies in the eastern sector of Strathcona Provincial Park, Vancouver Island, British Columbia. It is rarely climbed as an objective in its own right. Most people visit the summit as part of a superb high level horseshoe hike from Forbidden Plateau, along the height of land around Moat Lake, taking in Castlecrag Mountain and the NE/SE ridge of Mt Albert Edward as well as Frink and, if time and energy permits, a side trip to summit Albert Edward en route. Mt Frink is also the gateway to a long (3-4 day) alpine traverse south to the Comox Glacier.

In spite of being ~150m lower than Albert Edward, the summit aspect allows one to peek over the huge SW ridge of the latter to a stunning panorama of the highest peaks in Strathcona Park to the NW: The Golden Hinde, Behinde, Rambler Peak, Mt Colonel Foster, Elkhorn and Kings Peak amongst them.

The trip is usually undertaken from a camp at Circlet or Kwai Lakes. However, it can also be tackled in a long day (13-14 hours) from cars without the need to camp. The round trip distance is approximately 35km with a total ~1,200m elevation gain.

Like most mountains in the immediate area, Mt Frink can be climbed in winter and spring on snowshoes or skis. 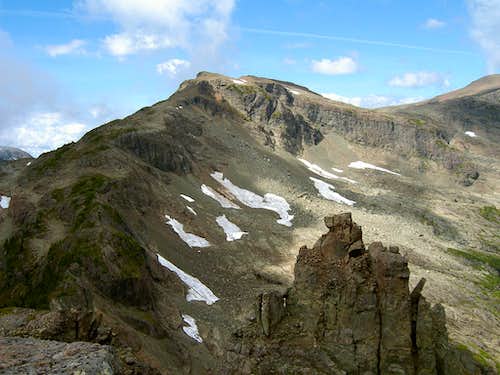 Vancouver Island can be reached by air from Vancouver to Victoria, Nanaimo or Campbell River and by ferry from Port Angeles to Victoria on The Coho and on BC Ferries from Vancouver to Victoria or Nanaimo. Public transport on the Island is relatively poor and anyone arriving by air would be advised to rent a car. Access in this case is all on paved roads and, therefore, fine with a normal sedan. Approach from north or south in the Inland Highway 19. Near Courtenay take the Strathcona Parkway exit west to Mount Washington Alpine Resort (the reason for the paved road to 1000m). Drive up 20km and just before reaching the resort make a left turn onto Henry Road, following Parks signs for Paradise Meadows. Pass the bottom of the ski lifts after 1.5km and drive a further 0.5km to the end of the paved road at the cross-country facility Raven Lodge.

Parks have established a new trailhead and information booth right beside the lodge. If you get back from your trip before 5.30 pm, the Raven Lodge has a lovely view over to the mountains and is a great place for the beer you so rightfully deserve!

Complete the formalities (see below) and head out across the boardwalk onto Paradise Meadows. The approach to Frink can be made as part of a circular route enabling infrequent visitors to see as much of the park as possible. Reference to this map illustrates the possible choices. I recommend going out via Battleship, Croteau and Kwai Lakes and returning on the somewhat shorter route via Hairtrigger and Helen Mackenzie Lakes. This also offers the option to camp at Kwai Lake if this is as far as you want to carry a heavy pack without backtracking from Whiskey Meadows. If you are planning a day trip, going out and back via Lake Helen Mackenzie will save at least an hour if time is a critical issue. Either choice brings you in 2-4 hours to a marked trail junction for the campground at Circlet Lake. If you are staying here the night, turn right and along the shore of the small unnamed lake before dropping down slightly into the bowl that holds Circlet. If you are undertaking a day trip, head straight on across the head of the small lake and up the trail towards Mt Albert Edward.
Five minutes up the trail watch for an old Comox and District Mountaineering Club (CDMC) wooden sign mounted high on a tree and indicating the way to Moat Lake. Make your choice here to walk the horseshoe clockwise (Castlecrag first) or anticlockwise (Albert Edward first). Walking clockwise brings you later in the day to the point when you have to decide if a side trip to Albert Edward is feasible. Having made your decision, go straight on for Albert Edward or left to Moat Lake and Castlecrag. Follow directions from the separate postings for Castlecrag to the spur route up to the summit or for Mount Albert Edward to the large cairn encountered as you arrive on the lower NE ridge.

From Castlecrag go due west on a reasonable track that heads towards Frink’s east ridge. After a few minutes you will come out on the connecting ridge between Castlecrag and Frink. Follow this around the head of the Eric Creek drainage staying on the left (south) side until you come to the east ridge proper. Go up this to a rather indistinct summit, there being several possible high points. The last time I was there, the true summit had a fishing pole stuck in it! From the summit, traverse north across the broad open ridge to arrive in 30-40 minutes or so on Albert Edward’s NE ridge at the point that it begins to turn north towards the summit. Head up Albert Edward or go straight on to return to your starting point. The immediate terrain in this section is rather featureless and there is no trail between beginning the climb up Frink’s east ridge and arriving on Albert Edward’s NE ridge. If visibility starts to look like becoming an issue, this is the place to mark a few waypoints on the GPS.
Returning to the anticlockwise route. From the large cairn on Albert Edward’s NE ridge go up to the point where the ridge starts to turn north and, if you’re not summiting Albert Edward, straight on south making a beeline for Frink. There is an old CDMC wooden sign marked “Castlecrag” indicating the route to Frink but don’t count on finding it. In several visits I’ve only spotted it once and was already past it going the other way! There are, however, some useful cairns now and then. From Frink go off the summit and down the east ridge towards Castlecrag to complete the circle.

If you are a day-tripper, there is nothing to pay. If camping at Kwai or Circlet Lakes, or anywhere else in the designated core area of Strathcona Park, there is a $10/person/day fee. There is a self-registration box and payment slot at every core designated trailhead. Payment can be by cash or cheque. I haven’t seen a stipulation specifying Canadian funds but I’m sure Parks wouldn’t refuse a cheque in US funds.

In this and all core areas of Strathcona Park you must camp only in the designated areas. In the present example this means at Kwai or Circlet Lakes. At each you will find a dozen or so wooden platforms. If none are available choose a site on the dirt that will cause as little impact as possible. Fires are strictly prohibited, so you must pack a stove. Both camping areas have a pit toilet and bear proof food cache. Giardia is well documented throughout Strathcona Park, so boil or treat all water.

Check the weather at altitude right from Mt Washington’s webcam