Mt Carl Heller is the popular name of a remote peak located in the Mt Whitney region of the High Sierra. It is frequently overlooked as it’s overshadowed by the neighboring fourteeners, Mt Whitney & Mt Russell to the south and Mt Williamson & Mt Tyndall to the north. Due to its remoteness, Carl Heller usually requires a multi-day outing except  when using the now year round arduous approach up George Creek. Carl Heller’s East Arête, visible from Highway 395 around the Manzanar Internment Center, is considered one of the finer knife edge scrambles in the Sierra.

The peak is unmarked on the current 7.5 degree USGS topographic maps and lies about 1 mile northwest of Tunnabora Peak. According to Peakbagger.com, the peak sports a clean prominence of 495’. The peak is named after Dr Carl Heller, the founder of the China Lake Mountain Rescue Group. The proposed name was submitted to the Board of Geographical Names and not accepted. However, through common use and inclusion in R.J. Secor’s “The High Sierra – Peaks, Passes, and Trails” book, the name has become accepted among mountaineering circles. 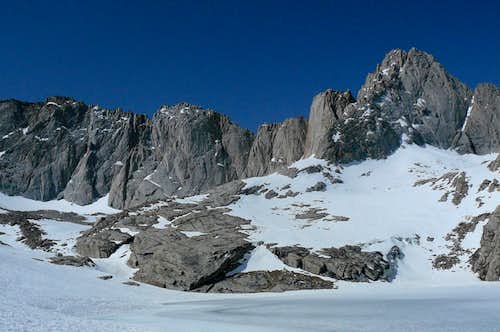 From the unnamed lake near the toe of the East Arête

Mt Carl Heller can be approached from either the east or west of the Sierra crest. Wallace Lake marks the beginning of the western slope of the mountain and can be approached from either the south or the west. George Creek is used to access the east side of Carl Heller. The Sierra crest can be crossed south of the peak by first climbing and then descending Tunnabora Peak or north by crossing via Vacation Pass.

East Arête: Class 3/4. This is one of the finest scrambles in the Sierra. Start by climbing the class 4 toe about 50 feet to the beginning of the ridgeline. Most of the ridge is crack and friction exposed class 3 climbing interrupted by class 4 moves. About half-way up, a class 4 boulder provides pause to the ascent. Further scrambling leads to the final gendarme on the ridge. This long gendarme can be bypassed on its north side -- a source of additional exhilaration if snow exists on the narrow ledges. The final chute leading to the notch is either filled with blocky granite or snow, depending on time of year. The summit is surmounted from the notch by moving around the west side while climbing the blocks.

West Slope: Class 3 to 5+. The western slope of Carl Heller is “guarded” by granite cliffs at the lower elevations. These cliffs can be bypassed by climbing up one of the chutes that leads from the southern end of Wallace Lake. The ribs toward the north end of the west slope are rated in the 5s according to R.J. Secor. The northwest ridge (south of the peaklets) is described as class 4. The enjoyable class 3 route leads up the southwest side of the peak over blocky granite. Careful route finding is required to keep this class 3 but this is good route to ascend and descend the peak.

Everything you need to know about permits, regulations, and driving directions can be found on the Eastern Sierra - Logistical Center page. The North Fork Lone Pine (NFLP) requires day hiking and overnight permits while George Creek only requires an overnight permit.

For an overnight trip, the best place to camp is either Tuleinyo Lake or Wallace Lake for the west side or the forested camp at the creek junction for the George Creek side.

Climbing can be done in almost any season but May through October are the most popular times. In heavy snow years, the East Arête, especially the chutes and ledges, may hold residual snow. This is also true for any of the routes over the Sierra Crest. Check for current weather. 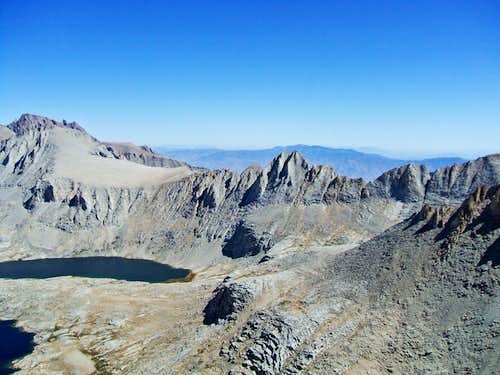