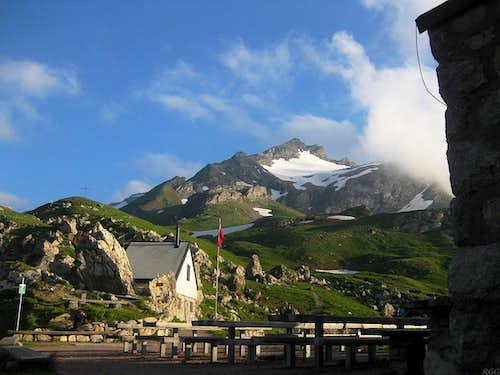 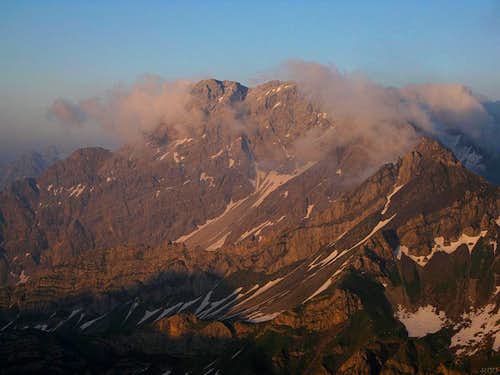 The Schesaplana massive
By Austrian and Swiss standards, 2570m is not particularly high, but nevertheless the summit views are magnificent. To the WSW, the Schwarzhorn grabs the attention. The Vorder Grauspitz is directly in line behind it, and as a result, all but its summit is hidden from view. But since they both are not much higher than Naafkopf, and not particularly bulky, they only make up a few degrees of the 360° horizon.

Of all the nearby mountains, only the Schesaplana group to the east, which is beautiful in its own right, is substantially higher and bigger. But imposing as it is, seen from Naafkopf, it still only covers a 30°arc, leaving 330° of the horizon free to see far and wide. In clear conditions, you can see for a couple of hundred kilometers to the north, deep into Germany, or as far as Piz Bernina (4049m), 80km to the south (more precisely, heading 162°). 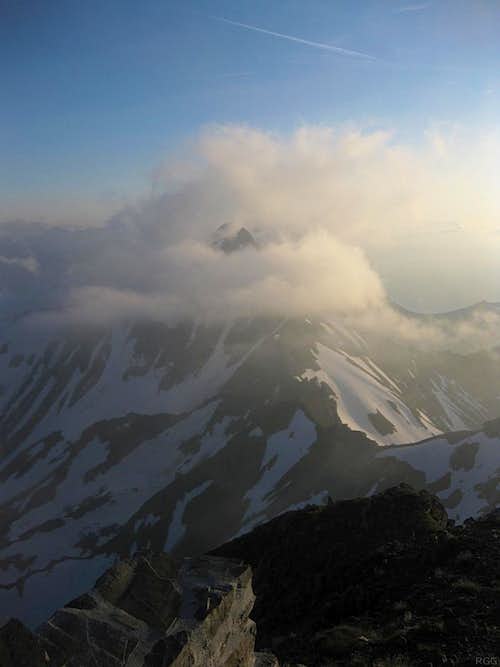 Schwarzhorn from the summit of Naafkopf
The northeastern ridge marks the Austrian-Liechtenstein border. After 500m it turns north, and in a little more than 1km reaches the Bettlerjoch (2108m). This saddle is the location of the very nice Pfälzerhütte, one of the two refuges operated by the Liechtenstein Alpine club.

The southeastern ridge marks the Swiss-Austrian border, eventually descending as low as 2292m just past the Barthümeljoch, where it starts to rise again towards the east and northeast, eventually culminating at Schesaplana (2965m), almost 8km east of Naafkopf.

The Swiss-Liechtenstein border is defined by the northwestern ridge, which turns southwest after just a few hundred meters. Schwarzhorn lies 1.5 km to the WSW, and Vorder Grauspitz just over 2km. The lowest point on the ridge, Ijesfürggli, between Naafkopf and Schwarzhorn, is 2348m high, which gives Naafkopf a prominence of 222m. 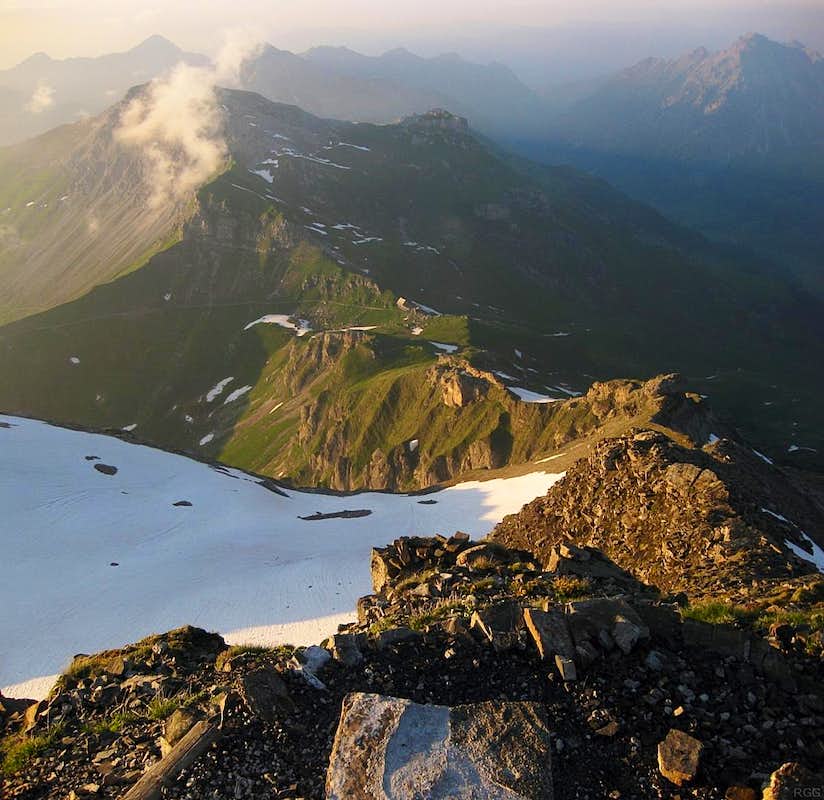 View north from high up the mountain, down the Liechtenstein-Austrian border.
Can you spot the refuge?

The east face, in Austria, is the least steep. It's shaped like a bowl, and is a little bit steeper near the summit. In winter, you can ski down (there is one steep step to avoid: best not to go down the center of the face but to the right or far left). The Liechtensteiner Höhenweg, a popular hiking route, traverses the east face on the route between the Bettlerjoch to the north and Barthümeljoch to the east.

The south face, in Switzerland, is steep and rocky just below the summit, but a gentle bowl lower down.

The north side, in Liechtenstein, has a more complex shape, with a couple of pronounced subsidiary summits and a mixture of steep and flat terrain, and impressive cliffs on the northwest.


Terrain map of Hochwilde. Zoom in for a better view or click here to open a larger map

Malbun (1600m), Liechtenstein, and Nenzinger Himmel (1350m), Austria, are the most conveniently located nearby villages.
Alternatives, but somewhat less ideal, are the Swiss provincial town of Landquart and the villages just north of it, especially Malans (600m).

Landquart lies along the A13. 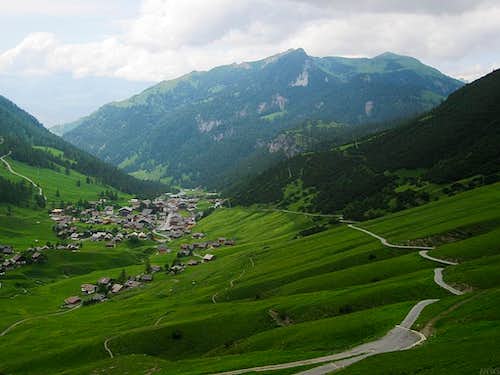 Malbun from the trail towards the Augstenberg

Malbun, Liechtenstein, which can be reached by bus from Vaduz or Triesen, is as close as you can get. Vaduz, the capital of Liechtenstein, has bus connections to Schaan in Liechtenstein, Buchs and Sarganz in Switzerland, and Feldkirch in Austria, all of which have a train station. From anywhere in the neighboring countries, an easy way to plan your trip is using the site of the Deutsche Bahn. Choose 'Malbun, Zentrum' as destination. Works even from as far away as Amsterdam.

Landquart and Malans, Switzerland, both have train stations. From Malans, the Älplibahn cable car can quickly transport you 1200m higher to Malanser Älpli (1801m) and about 6km SSW of the mountain. From there you can hike over the Barthümeljoch to the Pfälzerhütte in half a day. The cable car doesn't operate in winter. 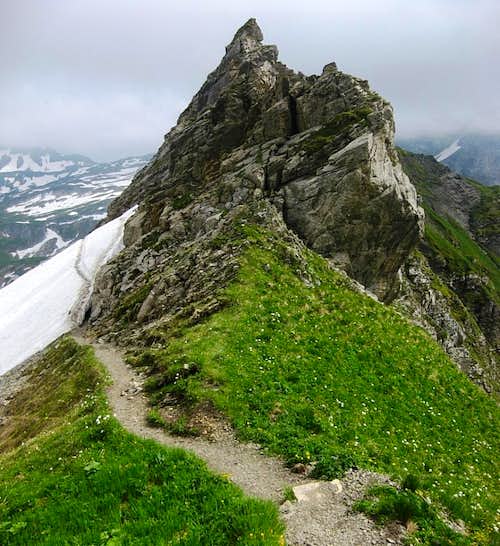 There are two popular hiking routes from Malbun to the Bettlerjoch and Pfälzerhütte: the Fürstin-Gina-Weg, a beautiful high route over the Augstenberg (2365m), or the somewhat shorter but less scenic route traversing the western slopes of the same Augstenberg. Count on about 2 hours for the low route and 2.5 for the high one. There is a cable car from Malbun to Sareiserhöhe, gaining 400m, which can save you one hour.

From Nenzinger Himmel there are also two options to get to the Bettlerjoch. The shortest one starts at the end of the road that goes a bit deeper into the valley (1550m) (47.070,9.632). From there, the trail winds its way to the west and up to the Bettlerjoch. The longer alternative starts in Nenzinger Himmel itself and twists its way generally westwards, to the Sareiserjoch on the border with Liechtenstein, from where you turn south to traverse the Augstenberg again. 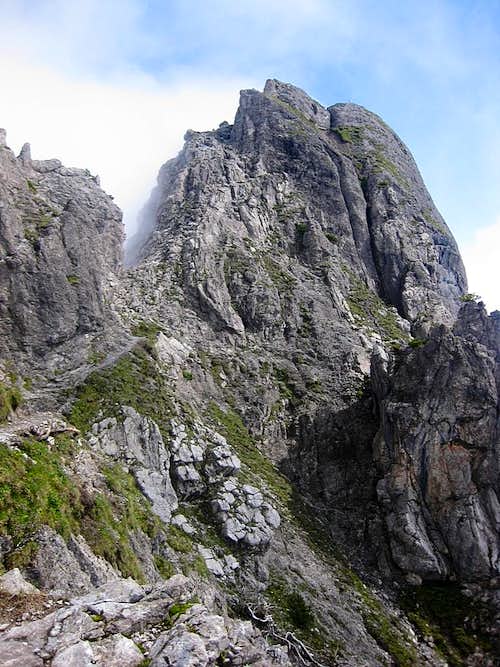 Drei Schwestern, above the Gafadurahütte
Extending your trip
There are many fine trails in the wider area, and, in addition to places to stay in the valleys, there are enough conveniently located Alpine refuges to plan a multi-day trip. I spent seven days doing just that. I arrived in Feldkirch by train, stayed at the Gafadurahütte, Pfälzerhütte, Schesaplanahütte and Totalphütte along the way and ended at a bus stop by the Lünersee well to the east.

The popular normal route is a strenuous hike. It starts at the Pfälzerhütte. You can easily see the big summit cross from there. The trail is marked and frequently used, especially the first 400m, where it is shared with the Liechtensteiner Höhenweg. After 400m, the Höhenweg goes left, the route to the Naafkopf to the right, and up. It twists and turns, on and off the ridge, generally heading south.

About half way, at a small foresummit (2318m), the ridge turns to the southwest, and the trail hugs the east slope of the ridge for a while. Early summer, the route may cross a few snow fields.

View from the north. The normal route is on the left, sometimes on the ridge, often a bit behind. It's hiking, no climbing.

The fine looking ridge to the northwest, soon turning southwest, is a very different matter and involves UIAA grade IV climbing. If you follow this on the descent, eventually you'll reach the Ijesfürggli saddle. There you can easily leave the ridge to the north into Liechtenstein or to the south into Switzerland. Alternatively, you can make a grand day of it and continue to follow the now easy ridge to the Schwarzhorn and, after climbing down a section of exposed poor rock (UIAA grade II), to the Vorder Grauspitz. You can continue even further west, but the ridge gets harder again (and the rock remains of poor quality), until you reach Falknis (2560m). From there you can follow a hiking trail.
Note: My personal experience with this ridge is limited to the section between Ijesfürggli and Vorder Grauspitz (in both directions).

None. There are no border controls between Austria, Switzerland and Liechtenstein.

All year round, but easiest without snow on the route. By the end of spring it's usually gone. 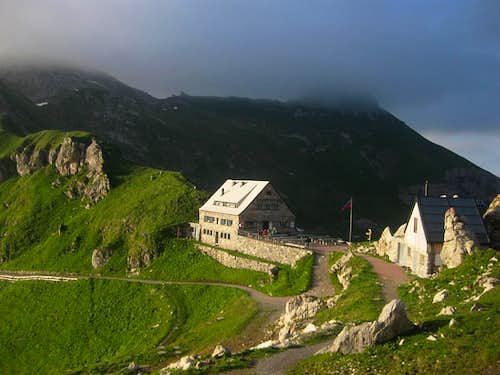 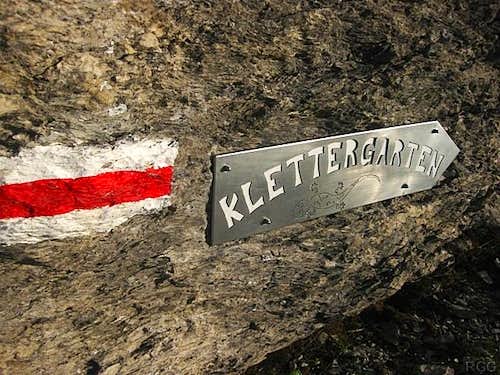 There is a rock climbing practice area just south of the Pfälzerhütte
The nice Pfälzerhütte lies just over 1 km to the NNE and makes an ideal place to spend the night, or, if you do a day trip from Malbun or Nenzinger Himmel, to have a rest and get something to eat and drink.
The village of Malbun, Liechtenstein, lies 5km to the north. In winter it's a ski resort, and consequently there are plenty of accommodation options and restaurants.

In Austria, Nenzinger Himmel is 4-5km to the northeast.

The nearest towns in Switzerland are further away, but for the summer season, Malans is conveniently located: from there you can take the Älplibahn (cable car) up to 1801m. 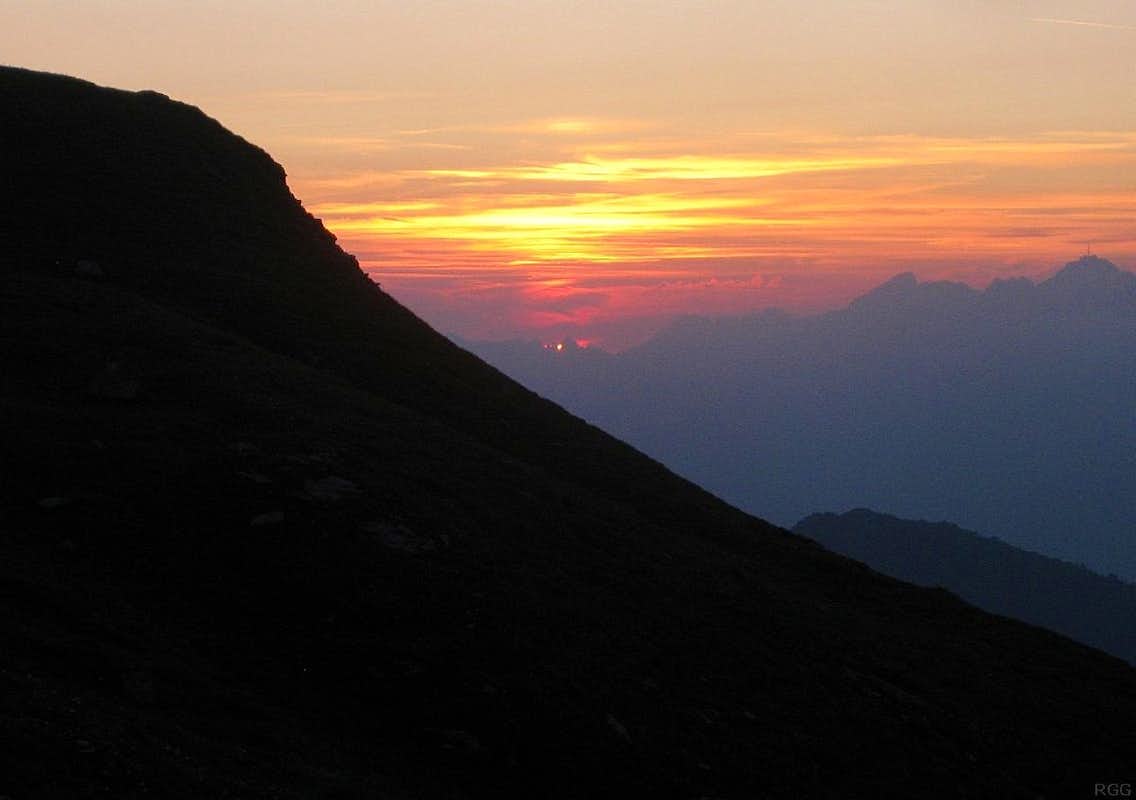 Sunset over Rätikon, from the normal route.
The ridge in the foreground is part of Naafkopf, but the distant mountains are Swiss.
On the far right, the highest one is Säntis (2502m), almost 30km away.