The Normal Route to the summit of Grossglockner is a well-known and famous route. Since it leads up the highest mountain of Austria it is also attracts lots of visitors each year. Climbing Grossglockner is on the wish list of many, many climbers all over the world and many of them who have climbed it did so along the normal route.
For a sharp and impressive peak like Grossglockner you would imagine the normal route being quite difficult. This is not entirely the case though: With a difficulty of UIAA class II & snow/ice of 40 degrees the route is graded PD+.
Most people climb Grossglockner in the summer months. In this period you will also encounter most guided group climbs. Winter ascents are occasionally done as well, but the summer months are most popular. Watch out for traffic Jams on the Obere Glocknerscharte, especially in the weekends in the summer months!

The route leads to the summit from two sides of the mountain: From Kals and Heiligenblut (both are described here). Both starting points meet at the Adlersruhe, where the Erzherzog Johann Hut is located. This is the highest mountain Hut of Austria at an elevation 3450m.
From here, the route to the summit is not too long and can be reached in 1,5-2 hours. On route you will pass famous points like the steep Glocknerleitl , the Kleinglockner , Glocknerscharte and finally the summit of Grossglockner with its distinct summit cross.


Both villages can be reached best by Car. For the different directions the route numbers are shown (in the order of approach). See the Route Maps in this section for details.


From the car park at the end of the Kalser Glocknerstrasse a scenic route leads up to the Lucknerhut. The path goes in one direction only from the Lucknerhaus so it cannot be missed. The path is a small road at this point. From the Lucknerhut the path becomes smaller making is a hiking trail instead of a road. The hike is quite easy (T2) towards the Stüdlhütte.
The longer you are hiking away from the Lucknerhaus the more quiet it gets on the trail. Shortly after passing the Lucknerhut a yellow signpost point in two directions. You have to take a left here (follow signs 'Studlhutte') The trail to the right goes directly to the Erzherzog Johann Hut and is called the Mürztaler Weg. (See the purple line on the route map). Although the hike is fairly easy at this point,before arriving at the Studlhut the trail becomes steeper but not difficult.
At the Studlhut you could rest and get some food and drinks. For guided tours this is the point to meet up with the guide.
From the Studlhut the marked trail goes up in the direction of Grossglockner. Follow once again the yellow signposts that say ''Erzherzog Johann Hut''. The route remains easy until you reach the start of the Kodnitzkees glacier, at this point the marked trail stoppes and mostly a path od foodprints continues on the glacier. From this point on it is wise to rope up and put on crampons.
The first part is a walk over the glacier onto the rocky ridge on the east side of the Kodnitzkees. This is an easy glacier walk, watch out for crevasses though. One you crossed the glacier towards the east you will enter the rocks and leave the glacier. From this point on it is a rocky scramble (grade I, fixed ropes) until you will reach the Adlersruhe at 3450m, on which the Erzherzog Johan Hut is located. The scrambling is easy, but gets more tricky in wet conditions when the rocks can become slippery. After this nice scrambling part you will eventually reach the Erzherzog Johann Hut, the highest mountain Hut in Europe. When spending the night here, evening views are great in case of good weather. you are truly looking down on everything from here.


From Heiligenblut go up the famous Grodssglockner Hochalpenstrasse. At the socalled Mautstrasse is the Glocklnerhaus from where the trail starts. From the Glocknerhaus you have to follow the marked trail down to the Margaritzen reservoir. Across the wall and towards the other side of the beautiful Leiter valley you will descent to the stockerscharte.
From here you will reach the Salm hut via the Wiener Hohenweg. From the Salm hut a trail leads to Hohenwartkees. Pass the Hohenwartkees on the left side and climb the rocks (with fixed ropes) directly to the Hohenwartscharte. Then you pass the Äussere Hofmannkees to the rocky Salmkamp. Then across Salmkamp to the hut.


For the other routes to the Erzherzog Johann Hut see the Hut page here on SP. Two other (less used) routes to the hut are described here.

Great Overview of the Normal Route on Grossglockner (above). The route from Kals is shown here as well as the summit part from Erzherzog Johann Hut

Translation of the German tekst next to the exclamation mark:
For all routes shown experience with high alpine glaciers as well a good physical condition is needed. The summit part of the route needs you to be able to climb in the II grade (UIAA) and is often very crowded (+500 persons a day-Watch out for Traffic Jams!)

A detailed explanation can be found here.

The classes (1,2) are from theUIAA scala. 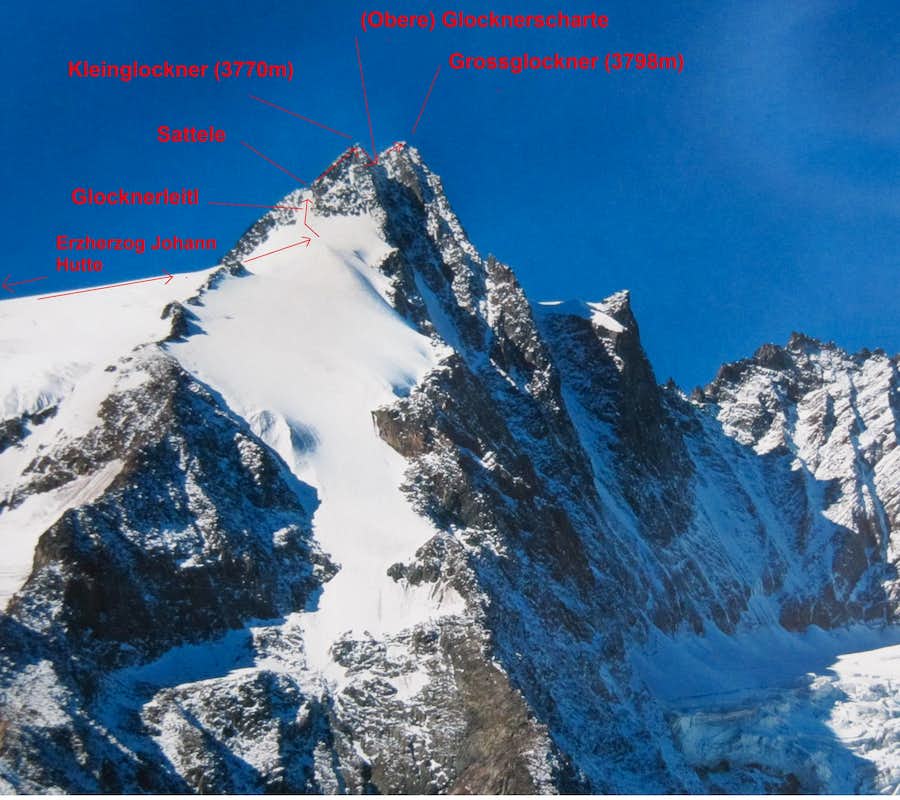 From the Erzherzog Johann Hut the route goes up to the so called Bahnhof. The first part is an easy snow walk. From the Bahnhof on the route gets steeper. Eventually you will enter the Glocknerleitl. The Glocknerleitl is at its steepest point 40 degrees. Watch out here, it can be icy. At the top of the Glocknerleits the Sattele is reached (the end of the snow-ice flank).
At this point starts the rocky ridge to the summit. When there is no snow/ice present it is a possibility to take of crampons here (late summer). If not, be sure to leave them on, the ridge can contain some steep ice. From this point on sicherungsstangen (fixed safety poles) are present until the summit.
The poles are located at about every 15 meters on the route. Continue upwards on the ridge, this includes some climbing in grade I/II (UIAA). Shortly you will reach the fore summit of Grossglockner names Kleinglockner (3770m). After this point the routes descents shortly into the Glocknerscharte: the saddle between Klein- and Grossglockner.
The Glocknerscharte is very narrow with steep drops on each side, so watch out when passing here.
After passing the Glocknerscharte, there is some climbing again in the I & II grade (UIAA) until you reach the summit of Grossglockner with its magnificent summit cross.
Descent is the same way back.

The climb is mostly done in two days. On the first day the ascent to the Erzherzog Johann Hut is made. After a (short) night sleep the final ascent to the summit is made. Summiting early gives you the time to get back in the valley (Kals or Heiligenblut) on that same day.

It has to be noted that climbing Grossglockner is serious business and a real alpine climb. It attracts many visitors, and it has to be said that not everyone on the mountain is up for the job. Only go here when you have enough (alpine) experience and you are able to climb in the PD+ difficulty level.
When you don’t have the experience either rent a guide or don’t go. In Kals and Heiligenblut are mountain guides that offer guided tours to the summit. For more information see the links below:


A detailed weather forecast for the Grossglockner Area can be found here: 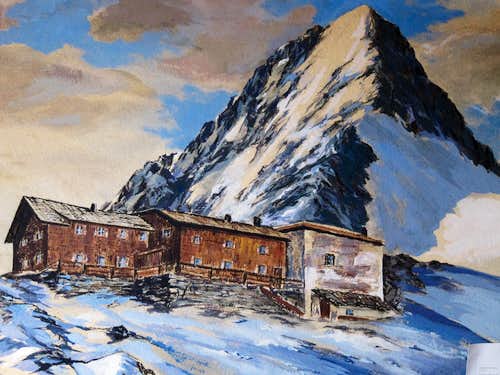 Painting of the Erzherzog Johann Hut with Grossglockner

Some other pages with useful information about the Grossglockner & Normal Route:

2)
A detailed description of the Normal and other routes on Grossglockner by blog.wuoko.org