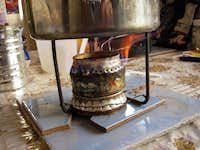 The soda can stove, often called the Pepsi can stove, is a homemade alcohol stove that is very popular with lightweight backpackers, especially thru-hikers. They can be easily made in a few minutes; they weigh less than an ounce, have no moving parts or anything to clog or break and are reasonably fast for boiling water. They also cost nothing to make, except for a little metallic tape or JB Weld. They can burn various forms of alcohol, which are readily available in most places, including ethanol, methanol (gas line deicer, like HEET in the yellow bottle), denatured alcohol and Everclear. They will also work with 91% Isopropyl alcohol, but not as well. Here in Peru, and possibly other parts of South America, you can also use Ron para quemar (alcohol for burning).

I would like to point out that there are some disadvantages that you should consider before deciding to use a soda can stove, or its close cousin the cat (can) stove.

1) There is no off switch and they don't blow out easily. It can be done with practice if you are windy enough, but if you aren't careful you can blow the flames away from the stove and start a fire outside of the stove. It is easier to use a slightly larger can, like the bottom of a Foster beer can, as a snuffer. This also needs to be practiced in a safe area, as it can cause the flames to flare out around the snuffer, or you might knock over the stove trying to snuff out the fire.

2) There is no flame control, i.e. you can't turn it down to a simmer. However there are various plans to make a simmer ring, that is supposed to work well, but I have never made one. Many hikers, myself included, mainly use their stove to boil water for instant foods or drinks. If I needed to simmer a little, for soup or mac and cheese, I raised the pot above the flames. Most of the time I used a pot cozy, which allows the food to continue cooking after the fuel runs out, this worked fine for mac and cheese.

3) Alcohol has less BTUs than most other stove fuel so it produces less heat output. Most tests show that it is still lighter to carry the extra alcohol needed, rather than a heavier more efficient stove, if you re-supply every five or six days or less.

4) They are best for one-person meals, although my hiking partners used one for the two of them for almost two months, after starting with a Whisper Light.

5) Alcohol usually burns with a clear or blue flame that is hard to see in bright light, so it can be hard to tell if the stove is burning or not. You can easily tell if it is lit by putting you hand near to feel the heat. With a pot on top, you can usually see the flame, even in daylight. Most thru-hikers (and climbers) will be using it early in the morning and later in the evening, and the flame will be more visible then as well. I very rarely cooked at lunchtime.

6) You need to use a wind or heat shield in most conditions. It doesn't take much wind to affect the stove, increasing cooking time significantly. Likewise it is helpful to use one in cold weather to contain the heat and reduce boiling time. See the photo of the foil wind shield below. It doesn't need to be that high but it good to come up to just below the lid.

How to Make A Soda Can Stove

All the stoves I have made have been regular soda can stoves. Simple instructions on how to make are are available here.
Zen Alcohol Stoves
There is also a lot of other information on the site, different variations, fuel info, etc. My stove looks a little different because I only use one can instead of the bottoms of two cans. It works just as well to put the burner holes in the top of the same can as in the bottom of a second can.

I like the pot stand that he has on this site. It is just two pieces of wire, about 12 inches long, that are bent in a square "U" shape, and held together on one of the sides by wire or sleeves. Another common post stand is stiff "chicken fence" mesh.

A photo of one and instructions to make them are included on one of the pages for the Penny Stove - click on "Original Instructions" and then click on the 7th circle to find the pot stand. This is the stand used in my photos. 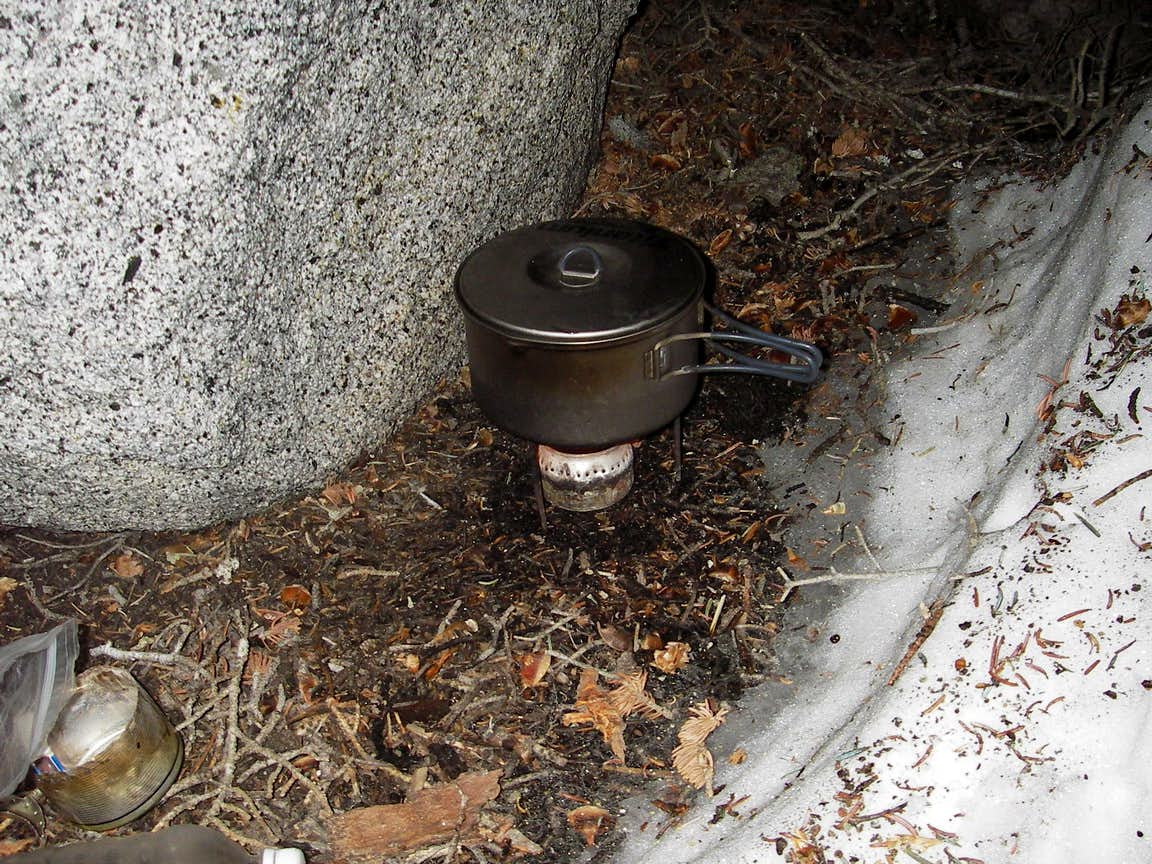 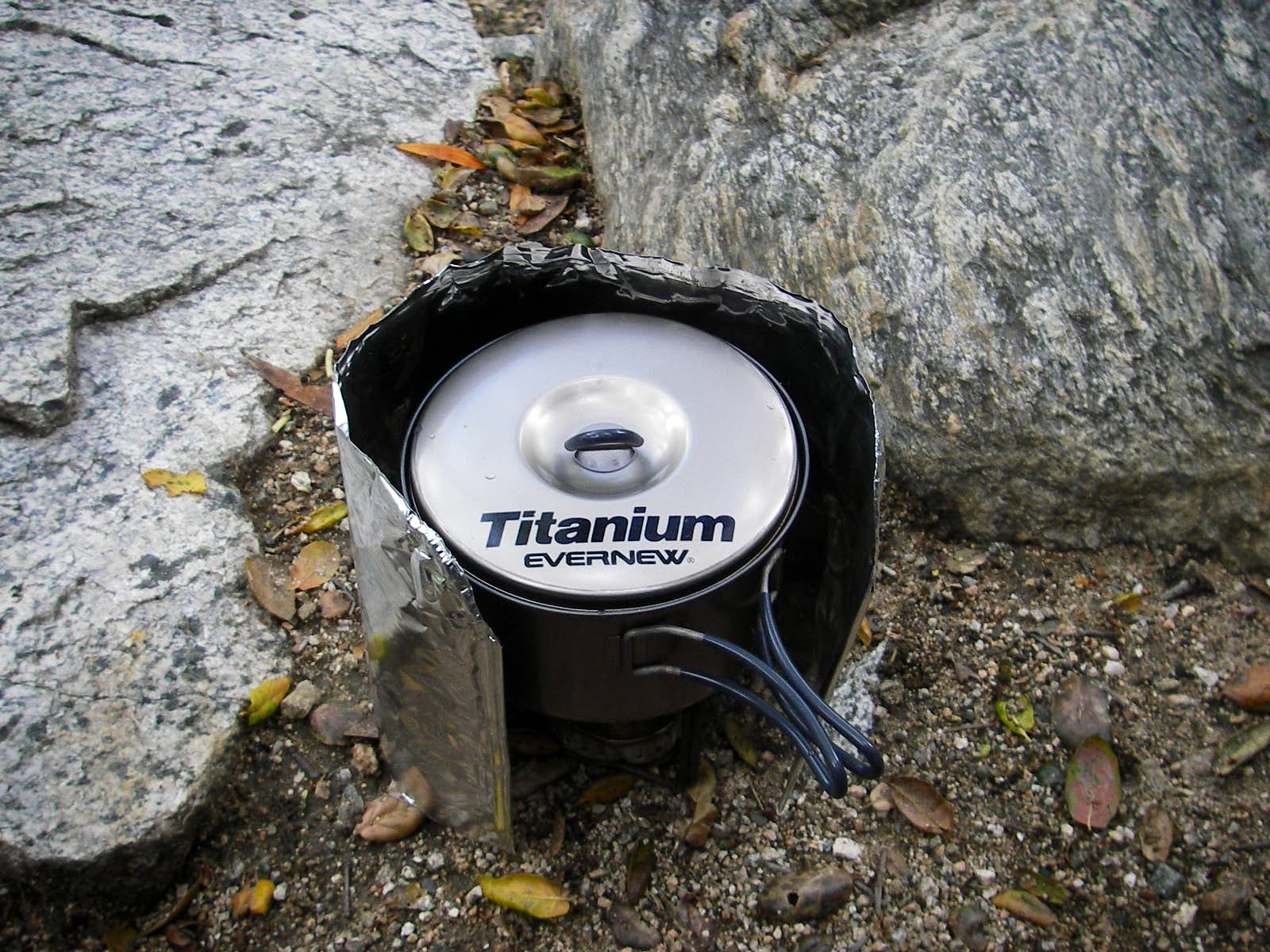 Foil Wind Shield
The advantages far out weigh the disadvantages for me, and it seems for many others, as it seems to be the most popular stove on the PCT. Mine got stepped on once by a fellow hiker, after straightening it out by hand, it worked fine and I used it the rest of the trip. I have used the same one for about four years now, and as there is nothing to wear out, expect to use it for many more.

The highest I have used it is at 18,800 feet at about 20° F, other than taking a little longer than normal to start burning smoothly, it worked fine. Normally you need to use a pot stand, and a wind shield. I made a combination pot stand and wind shield out of a 4"x4" can that works well until about 11,000 feet or so, but above that it doesn't get enough air. The wire stand described above is lighter but needs a separate wind shield.

Gas line deicer is what I normally use for fuel in the U.S., metilico here in Peru, both are methanol. HEET is usually available in discount stores, auto parts stores and even supermarkets, and cheaper than at gas stations.

This Is So Cool...
Honestly, I would have never guessed this one. What a great concept! The almost comical simplicity made me chuckle and smile. May have to try it sometime...

Re: This Is So Cool...
It is a great concept and they work great - no pumping, priming, clogging or repairs. What is really cool is after making your first one, sitting back and watching it actually work!

Photon Stove
I've been using the Photon stove for years for 3-season backpacking, with denatured alcohol as fuel.

Disadvantages: yes, some of them do require priming, and can be fiddly to start. For longer trips, fuel efficiency is not as good as canister stoves, nor are they effective at melting a lot of snow for snow camping / mountaineering.

For 3-4 night summer solo trips in the Sierra it's all I need though. At lower elevation (coast ranges) I use one of these year-round. For trips with other people I use a canister stove. If I'm going to have to melt a lot of snow, I'll bring a white gas or powermax stove.

More Pros and Cons
I'm going to try not to go over what's already been said. So...

Yes, the fuel is inexpensive.
Yes, the stove is light.
Yes, there are no moving parts or seals to fail so there are no repair kits to be carried.
Yes, an efficient and functional stove can actually be made in less than three minutes with a pocket knife and two cans and will last many seasons.
Yes, like with most liquid fuel stoves, altitude isn't much of a problem.
BUT, my favorite thing about the soda (beer, juice, whatever) can stoves is that, when I get up at 4am and the rest of the group are still asleep, I don't have to go hundreds of feet away from camp to light up an incredibly noisy canister or, worse yet, white gas stove to get my coffee started. These stoves make no sound whatsoever until the water starts to boil.
Just for the record, I've been using a Photon stove variant (made from an aluminum beer bottle using only two pieces) for the last four years and for the last three years it's been my exclusive stove during spring to fall trips. By the time others have their cannister attached to their stove, my water is already warming. By the time others have their fuel can attached, pumped up primed and warmed up running efficiently and ready to put their pot of water on, my water's already boiled and in the bag, my stove's cooled off and packed away. And I've used less fuel to boil than they've used to prime.

Cons- If you're using a standless design, your boil time will significantly increase when you set that pot of near freezing water on the stove as it will act as a heat sinc and cut down on the stove's efficiency. Precautions can be taken and design changes made to circumvent this quite easily.