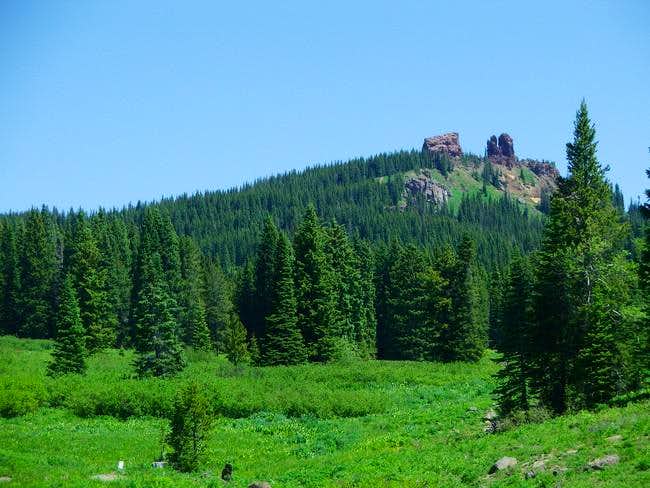 The Rabbit's Back (left, west tower) & the Rabbit's Ears (right, east tower).  Submitted by vanny37
Rabbit Ears Peak is a very recognizable and well-known summit in northwestern Colorado. The remnants of an old volcanic plug, the peak resembles less of its namesake than in the past due to gradual erosion. Several years ago portions of the east tower fell, causing the peak to look even less like rabbit ears. That said, the peak is still very recognizable and is a very popular destination in the area. Easy access and an easy hike also contribute to the popularity. Visiting the base of the summit of Rabbit Ears Peak provides an excellent day hike for all abilities.  The peak is located in the Routt National Forest and according to some sources, forms the western boundary of the Rabbit Ears Range, which is in fact a sub range of the larger Front Range.  Other sources indicate that Rabbit Ears Peak is the southernmost peak of the Park Range and does not belong to its namesake range.

The rock on Rabbit Ears Peak is very poor and crumbles in your hand. The west side of the west tower (The Rabbit's Back, 10,654') used to have a ladder bolted to it and looks to provide the easiest ascent to the top of the west tower. The final summit pitch is rated 4th class and is located just east of the old ladder.  However, the high point of the peak is actually the east tower (The Rabbit's Ears, ~10,657'), which is also considerably more difficult in technical nature (5.5 C2). 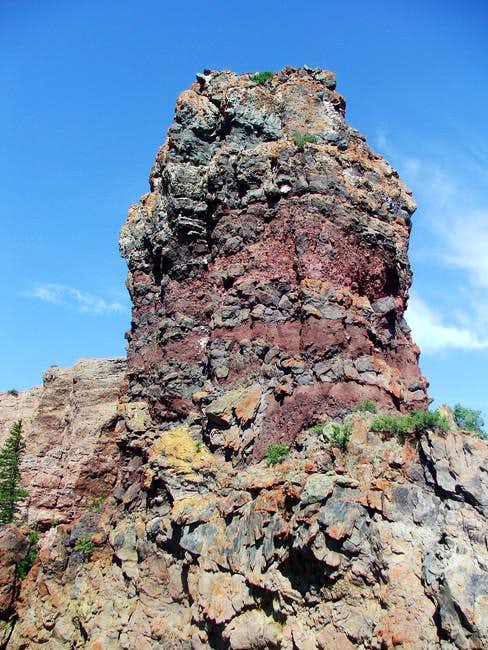 A view of the higher, east tower.  Submitted by vanny37

Brief History of the Pass

Rabbit Ears Peak has been used as a landmark since the first pioneers entered the area. The peak has guided many to the Yampa River valley over the years. In 1913, the United States Forest Service, along with local ranchers and others constructed the first road over Rabbit Ears Pass. The road has since been improved many times. A major overhaul of US 40 over the pass involved the relocation and widening of the road. Rabbit Ears and Gore Passes are the only major routes from the east into the Yampa River Valley.

From Steamboat Springs, CO head east on US 40 and begin the long grade up to Rabbit Ears Pass Summit (9,426’). Once at the pass, continue on US 40 through the high, rolling terrain to Dumont Lake where you turn left onto the old Rabbit Ears Pass road. Drive for approximately 1 mile to a large stone marker on the left. Turn left at this marker and park.

Caution is advised on this road; many people are killed on this stretch of highway each year and even more are involved in wrecks! The locals refer to this pass as ‘Dead Man’s Pass’. This pass can get very bad in winter as this area of Colorado is one of the wettest and snowiest in the state! Drive safe!

CLICK HERE for a map of Steamboat Springs, CO.

The Peak is in the Hahns Peak – Bears Ears Ranger District of the Routt National Forest located in Steamboat Springs, CO. Contact information:

Rabbit Ears Peak can be climbed year round. In summer the pass and peak is known for its wildflowers and can be quite stunning; however, on most days expect there to be many others enjoying the area! In winter the area is a cross-country ski heaven. Trails can also link you to Steamboat ski area’s runs.

There are campgrounds on and near the pass in Routt National Forest, one of which is Dumont Lake right at the base of Rabbit Ears Peak. Also, camping in the backcountry is permitted.

CURRENT CONDITIONS from a nearby weather station on Rabbit Ears Pass.