The Uinta Mountains of eastern Utah contains the largest area of high elevation, and most of the highest peaks of the state - including the highest: Kings Peak in the eastern part of the range. This range of mountains is unusual in having the main axis or 'spine' oriented in an east to west direction, resulting from anticlinal folding. Many peaks thrust well above timberline (which is about 10 to 11,000 feet in this area). The beautiful sculpted scenery of prominent steep mountains among broad forested lake basins results from heavy glaciations in the distant past. The western extent of the range is accessible by many roads, and is relatively convenient to the major population center of Utah (the Wasatch Front). A less-visited un-named peak - 11027' in elevation, is described here. This peak is a north-south running ridge (arete) - a divide between ancient glacial basins. The peak is surveyed, but has no name.

Utah State highway 150 (accessible from either end: Evanston, Wyoming or Kamas, Utah) is used. The road is closed by snow in the winter (but open to snow machines). The recommended route to this mountain starts at either Washington or Trial Lakes - an area of heavy use with several US Forest Service campgrounds and trailheads.

The shortest and most direct route is mostly maintained trail: FS 081, starting from the Crystal Lake trailhead (elevation: 10023'). This trail is very popular and heavily used - it accesses many lakes including the large Wall Lake. Hike north on this trail to 'The Notch' (a large pass between east and west parts of Notch Mountain). The Notch is obvious when the view opens up at Wall Lake. The Notch is roughly two and 1/2 miles from the start - from this place, peak 11027 will be plain to the north, towering above a basin with many lakes. The trail continues past the Notch, descending to the lake basin. However, leave this trail before it descends too much in order to skirt the base of the west part of Notch Mountain. This will involve a short section of route-finding, scrambling and boulder-hopping - nothing too difficult. Aim for the southern end of the ridge of 11027. 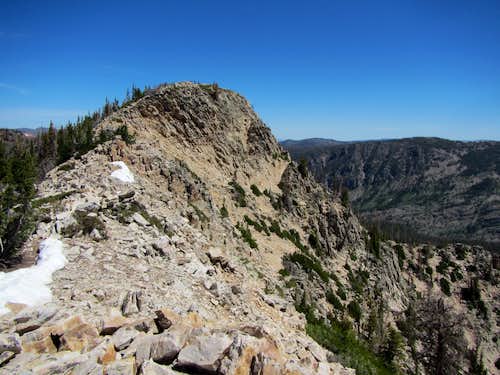 Ascend the ridge to the peak (above photograph) - it is a fun scramble on mostly large stable boulders and bedrock outcrops. A small summit cairn was found, and a survey marker on the ridge south of the true summit. On my initial hike here, my companion and I descended from the peak to the northeast into the lake basin, and returned from there to The Notch. I would not recommend this way because of the scree slopes one must cross. A GPS track of our hike (as described) showed 5.11 miles one-way to the peak in less than three hours (a leisurely hike, including ~ half an hour of stop time).

A Recreation Pass (small fee) is required for all parked vehicles in this area. One can purchase the pass at kiosks along the road. An annual federal recreation pass, such as the America the Beautiful interagency recreation pass, is also valid.

The trailhead is accessible when the Utah Department of Transportation opens the locked gate (south one is located near Soapstone Campground) in the spring. Snow machines are allowed on highway 150 when snow-covered.

If you are interested in geology of this area, I recommend the following: