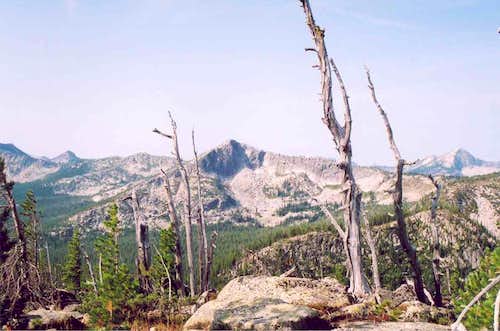 The unnamed Peak 7,445 is the tenth highest point in the Selkirk Mountains south of the Canadian border, specifically the Priest Lake subgroup of that extensive range. It has 625 feet of prominence and is the third highest point on the remote Parker Ridge between Parker Peak (7,670) and the unnamed mountain (7,535) at the head of Parker Canyon. On the map this point occurs as a pyramid just north of a couple ridge points labeled as Long Mountain, though some sources put that name on the higher point south (Pk 7,535). This ridge can only be reached by trail and divides two large unroaded drainages, Parker Canyon and Long Canyon. These canyons and ridges are examples of the extreme glaciation that took place here in the Pleistocene as evidenced by north-south orientated ridges composed of glacial horns and arêtes that divide the deep U-shaped valleys. Cirques and hanging valleys hold several subalpine lakes on these features. The entire landscape except the highest summits was covered by thousands of feet of continental ice during the last major ice age. The pyramid shaped mountain is gently sloped on the ridges and southerly slopes, which are easily hiked on the trail. However, like most Selkirk peaks, the north bowl provides a large granite wall for the technical climber. This wall is approximately 7-800 feet high and is part of a steep cirque slope that rises nearly 1,050 feet above a small subalpine meadow and pond. The mountain rises approximately 2,500 feet above the adjacent floor of Parker Canyon to the east and approximately 3,000 feet above Long Canyon to the west. 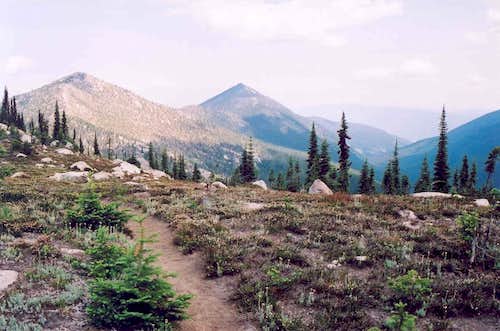 There are only a couple practical ways to this peak, both of which will require several miles of hiking. The easiest route is via Pyramid Pass from the south. The other route is from the mouth of Parker Canyon to the north. This trail climbes and traverses Parker Ridge for several miles.

For the first route; from Bonners Ferry, exit Highway 95 into downtown and get on Riverside, the road heading west from town on the south side of the Kootenai River. To find this road just head north a couple downtown blocks and you’ll be there. Continue on this road for about five miles to the Kootenai National Wildlife Refuge. Take a right towards the refuge headquarters on the West Side Road (road 18). The road turns to gravel and continues north along the east foot of the mountains. The wetlands to the east are a good place to spot moose, especially in the mornings. Continue north on the West Side Road for approximately 11 miles to the Trout Creek road. Turn left and head up the narrow road 10 miles to the trailhead. Follow Trail 13 for half mile to the Pyramid Lake turnoff (Trail 43). Keep right for another half mile to the junction of Trail 41 (which goes right to Trout Lake). Take a left and continue almost a mile to Pyramid Pass. Continue north for about half a mile to the junction of Trail 13, which continues to the left into Long Canyon and Trail 221, which goes to the right and on to Parker Ridge. Take the right and continue for about two and a half more miles to the unnamed peak 7,445. The trail virtually crosses the summit so it’s an easy walk up. The net climb from the trailhead is 2,045 feet, but the ups and downs of Parker Ridge will require a total ascent of about 2,615 feet.

To reach the northern trailheads, from Bonners Ferry, go north on Highway 95 for about 16 miles to the Mt. Hall School. Keep left onto Highway 1, (Highway 95 merges right) and continue about 1 mile to the Copeland turnoff (Wallen Road). Turn left and drop off the bench into the Kootenai River Trench and across to the West Side Road. This is a total distance of nearly four miles. Turn right on the West Side Road and continue for about four miles to the Parker Ridge trailhead (Trial 14). The north end of the Parker Ridge trail (221) ties into Trail 14 about a half mile from the trailhead. It is about 12 miles from the trailhead to unnamed peak 7,445 on Trail 221. Other cross country routes up from the bottoms of Parker Canyon or Long Canyon are strongly discouraged due to difficult terrain, steep slopes and incredibly dense brush.

None. You may have trouble parking at some of the busier trailheads on weekends. The fact that there is not physically space to park in the designated spots may not be considered when it comes time to write citations. 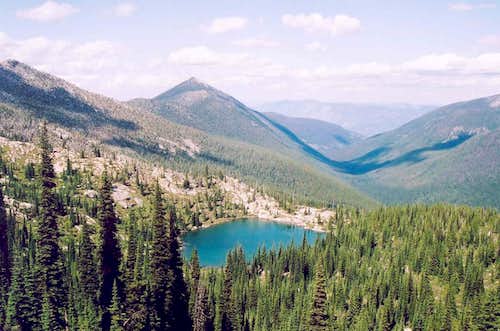 The mountain itself is a high point on a dry ridge offering little in the way of good camping, though one could find a flat spot among the rocks for a small tent in a number of places. There is a nice meadow and pond at the northeast foot of the mountain, which would offer solitude. It looks like the mosquitoes would be horrendous there. Reaching this spot would require hiking down several hundred feet from the top of the ridge. There is also good camping at Pyramid Lake, about five miles to the south. On the west side of the ridge, just over two miles further north sits Parker Lake. This remote lake offers very limited camping with only one good campsite on the north end. There generally is solitude here however. Long Mountain Lake is about two miles south on the Parker Canyon side of the ridge.

Along Parker Ridge, some snow patches hang on well into July and even August in cooler summers. Hiking over these is no problem, but the trailheads and trails may be deeply buried from late October through most of June. The lower elevation, northern trailheads will be accessible in April and May, but climbing very high from them will not be possible.