Pic de Monestero is one of the highest peaks in the eastern part of the Aigüestortes / Estany de Sant Maurici national park in the Spanish Pyrenees. Judging from the not very clear trail leading up to the summit, the mountain doesn't see that many visitors. This is likely due to two facts (1) Pic de Peguera lies just next to it and is approx. 100 m higher and (2) the mountains falls 120-130 m short of the 3.000 m mark and is therefore much less famous than its bigger brothers in the western part of the park; Punta Alta, Besiberri and Pic de Comaloforno. That is a shame because the peak is easy to climb and it takes less than 30 minutes to reach the summit from Coll de Monesto which is one of the passes crossed by the highly popular Carros de Foc hiking trail. Most people hiking the Carros de Foc however just head towards the next hut and thus miss the nice views from the summit. You can see a big chunk of the southern part of the national park - and in clear weather you should be able to see Pica d'Estats (highest mountain in Catalonia) some 35 km's to the east. 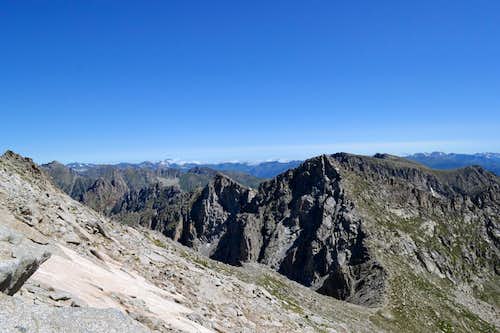 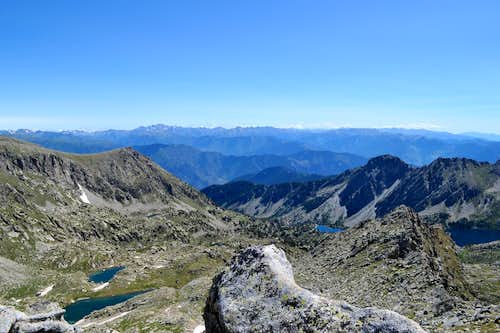 View from the summit of Pic de Monestero

Access to the summit is from one of the refugios on the Carros de Foc route; Refugi J.M Blanc, Refugi Colomina or Refugi Mallafre. For getting to the national park and the refugios see the Pirineos: Aran-Aigüestortes page. 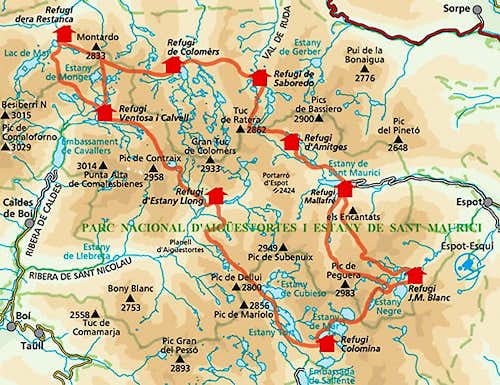 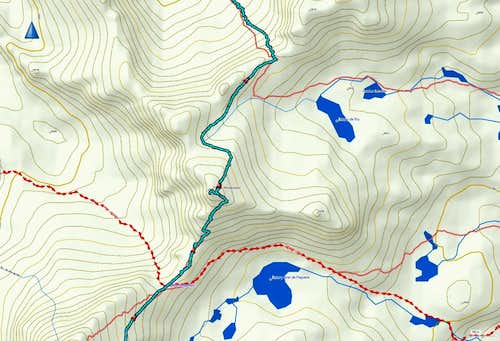 GPS track of Pic de Monestero
Two hiking/scrambling routes lead to the summit:
Southwest ridge (normal): Follow a steep hiking trail from Coll de Monestero. The trail is is not super-clearly marked, but there are a few cairns here and here. And if you get lost, just head uphill, since the terrain is not so steep.
North face: From Coma dels Estanys Escondits the route traverses gently across grassy slopes with a few rocks here and there and then climbs the north face of the summit. There are a few cairns but I lost track of them a few times, so trust your map and/or GPS to lead to way if visibility is bad. 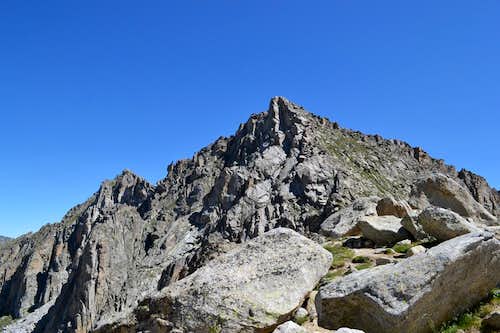 It's very advisable to make reservations well in advance in the refuges especially in the summer.
Aigüestortes is a National Park with rules about the wildlife, the camping, etc.

Can probably be climbed year round. 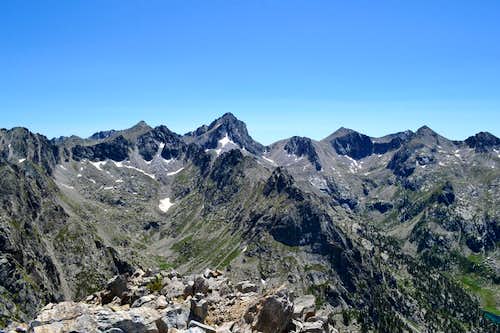