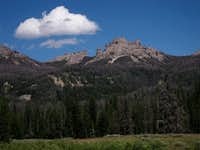 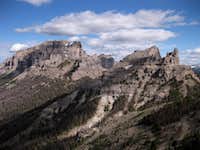 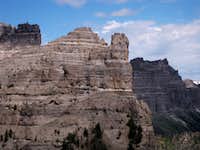 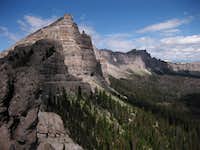 
Southeast of the main summit of the Pinnacle Buttes are two peaks that both have enough prominence to qualify as ranked ones. "Pinnacle Buttes-- Southeast Peak #1" is the more northerly of the two and is also the hardest to climb of all five main Pinnacle Buttes summits. In fact, there has even been some speculation that the peak has never been climbed (or had not been until I climbed it on August 15, 2011).

This is not due to technical difficulty of the route or obscurity of the peak. The hardest it gets is Class 4, maybe into "easy" Class 5, and the peak is easily seen from a major paved road.

The problem, though, is the last "pitch" to the highpoint. It involves a knife edge that lives up to the name; it is in places not wide enough to accommodate a boot. But one cannot (or should not) rope up, nor can one grab the edge, drop the legs, and inch along; both are inadvisable because the rock is obscenely rotten.

I know for a fact that experienced Teton climbing guides have passed on the final pitch. Now I bring this peak to SP but with this warning: do not go for the summit unless you love-- and I mean love, not "am comfortable with"-- horribly loose, exposed rock from which a fall would almost certainly be fatal. As much as I enjoyed this climb and am glad I reached the summit, I would not do it again, or I at least would not do that final pitch again. Having done it once, I would not take the risk again.
(Note-- on some maps, this peak is labeled as "Pinnacle Buttes South."

I contacted Thomas Turiano, author of Select Peaks of Greater Yellowstone and a respected voice in Greater Yellowstone mountaineering circles, and during a brief correspondence, he expressed a belief that the peak had been unclimbed. So far, I have not found anything online or in print, or heard anything by word of mouth, confirming that the peak had been climbed before.

Even though a first ascent of this peak will not get me a feature in Climbing or  Rock and Ice magazine, it would be cool to think I was the first to reach the highpoint. For reasons stated in the route description, though, I have to doubt that I was, and maybe this page will catch the attention of someone else who has climbed the peak.

About 7 miles east of Togwotee Pass on U.S. 26/287 northwest of Dubois, turn onto the road for Brooks Lake and follow this good unpaved road for about 3.5 mi to a signed parking area for the Pinnacles Trail. This road is passable for passenger cars.

The best way is probably to climb the other southeastern peak of the Pinnacle Buttes first (Point 10,617) and then use the saddle between the two peaks. The page for that other peak gives more details about the climb, but here are some basics to make this page functional:

The trailhead is at about 9100'. Hike the trail for about 3 miles, climbing gradually. At a little over 10,000', the trail emerges from the trees and crosses rocky slopes. Either continue on a little to find a walk-up route or start heading up the steep breccia slopes. The latter is more direct-- no more than half a mile to the summit-- but also more challenging, with steep Class 3/4 terrain on brittle rock.

The trail does cross a drainage that one could follow up the mountainside, and then you would veer left up the basin to reach the saddle between the peaks. Obviously, this will be shorter and have less elevation gain than the route I suggest, but it will entail some bushwhacking. From the trail, the bushwhack didn't look very appealing, and from above, it didn't look much better.

From Point 10,617, descend just over 300 vertical feet to the saddle between the peaks. Now your goal is to reach the southwestern ridge leading to the summit block. There is no one way, and if you like scrambling on loose rock, this part of the route is a blast. Pictures below help show the way and the goals, but other than that, you're on your own. I encountered a lot of Class 3 and a little Class 4 during my efforts to reach and crest the ridge.

The southwestern ridge is narrow, airy, and loose; the casual scrambler will not like it, but most could get to the bump that is almost but not quite the highpoint. Getting up that bump might be intimidating, though (see third picture below). After that, the ridge then leads to a section that is even narrower and which will probably turn back most climbers since the rock is so loose that relying on protection would be scary and climbing on without being roped up would be scary as well. Navigating that last section was, frankly, the most frightening thing I have ever done in the mountains, scarier even than free soloing a wet 5.4 pitch on Quandary Peak's Inwood Arete, because of the incredible looseness and exposure. Few people in their right minds will want to traverse that final pitch, and the more experienced the climber, probably the more likely he/she will look at it and say, "No way." I am not claiming I either was or am in my right mind, and I would never recommend this summit to anyone not enthralled by being in rotten, loose terrain with no protection. But I already said that, right?

Here is what I wrote about the final section on Lists of John, with some minor edits included:

Climbed it on August 15, 2011, after first climbing the peak just south of it. The ridge traverse between the two was easy, and it took me about 30 minutes to get from the saddle to the summit. There was a lot of fun scrambling on loose breccia to get to the ridge leading to the highpoint, and then the real fun/fright began.

TWorth is correct about the scary-looking final ridge, and things get even worse atop the ridge. It narrows to the point of only being wide enough for one's feet; in one spot, I actually crawled because it was windy and the rock was ridiculously loose.

Compounding the problem is that there are two blocks that appear to be the highpoint, and it is very hard to tell for sure. The second block is at the very end of the ridge and is separated from the rest by a true knife edge with hundreds of feet of exposure on both sides, and it is, like the rest of the peak, very loose. However, that second block does appear to be slightly higher.

Because of the looseness, grabbing the knife edge with both hands, dropping both legs, and traversing along was out of the question. Instead, I straddled and scooted, one particularly loose and large rock scraping the family jewels as I inched along. I wanted to knock it loose first, but I was afraid of what dislodging it might do to other rocks by it, and the ridge just crumbling like a Vegas hotel being demolished was not beyond imagination. So I edged along until I could put my feet on a small ledge and scramble the few feet to the summit block, which is large enough for just one person. Going back was even worse because the moves were a little harder that way.

Sometime this fall, I will be posting a page on SummitPost.org with a route description and photos, including ones of and from the summit block and the knife edge.

Thomas Turiano has a picture on his site taken from near the summit. I will be emailing him to see if he has reached the summit block or knows someone who has. In this day and age, I doubt that the speculation of the peak having been unclimbed will prove true, but I would definitely like to look into that.

One final comment: I really would not trust gear on this peak because the rock is just awful. But it's a blast to scramble on!

I did not build a cairn atop the summit or leave a register, as I don't believe in doing either. However, I do have the pictures to prove I was there, even if I don't have the sunburn. ;-)

The Brooks Lake and Pinnacles campgrounds are both located about a mile past the turnoff for the trailhead. Summer 2007 fees were $10/night. Both are small campgrounds that operate on a first-come, first-served basis, and Brooks Lake is very popular with fishers, so don’t show up after 3 P.M. on a nice summer day and expect to find an open site. The campgrounds have trash bins, bearproof lockers for food storage, pit toilets, and water (though the water at Brooks Lake was shut off in July 2007). Both campgrounds are among the most scenic developed campgrounds you will ever see. Brooks Lake is surrounded by open meadows and towering cliffs and pinnacles.

Off 26/287 very close to the Brooks Lake turnoff is the Falls CG, operated by the Forest Service. It is a large one and will usually fill late if at all.

For more information on camping and regulations: Shoshone National Forest.