Pinnacle Buttes are in the Togwotee Group of the Absaroka Range of Wyoming. The highest butte of the massif (usually referred to in the singular form as Pinnacle Butte) is also the highest peak of the Togwotee Group. The formation is loosely referred to as "the pinnacles". A regional postcard icon, if you ask locally for "the pinnacles", fingers will point at this massif.

The view of this formation has impressed millions crossing Togwotee Pass on their way to Yellowstone-Teton National Parks but few stop to investigate; sheep and goat trails surpass signs of human visitation above timberline. 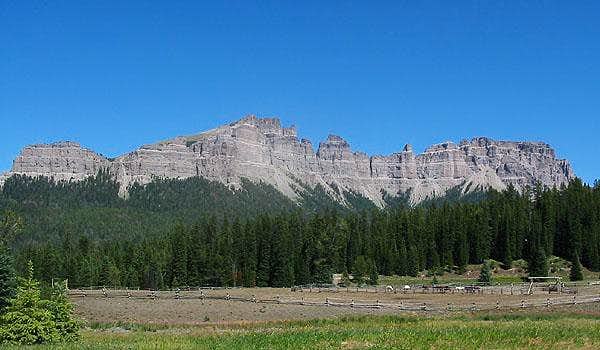 In addition to a multitude of pinnacles, the structure contains four separate summits. Aside from the main peak, the summits are:
Northeast11245'/3428m
Northwest11175'/3406m (pictured)
Southeast10822'/3299m
The alpine tundra of the tilting summit plateau of the main butte is guarded by cliffs on all four sides, with the SE side of the main summit being the most broken.

The rock is Absaroka Breccia which makes technical climbing on the 1000'+ high cliffs all but impossible.

The north side of the peak holds a sizable basin known as Jules Bowl, which, in winter, is popular with both snowmobiler and glisse descenders. Several of the major couloirs descending through the cliff bands have also seen extreme ski descents in recent years.

Driving to the Base

The starting point for activity on the mountain is the Brooks Lake Road, reached from US26/287 near Togwotee Pass. The pass itself is reached by driving highway 26/287 for 34 miles east from Moran Junction or for 22 miles west from Dubois. 7 miles east of the pass (or 15 miles west of Dubois), the Brooks Lake Road (#515) heads north at a well-marked junction. About 4 miles up this road is the parking lot for the Pinnacles Trail. The mountain can also be accessed from the Bonneville Pass trailhead by continuing up the Brooks Lake Road for another mile to the junction for the side road to this trailhead. 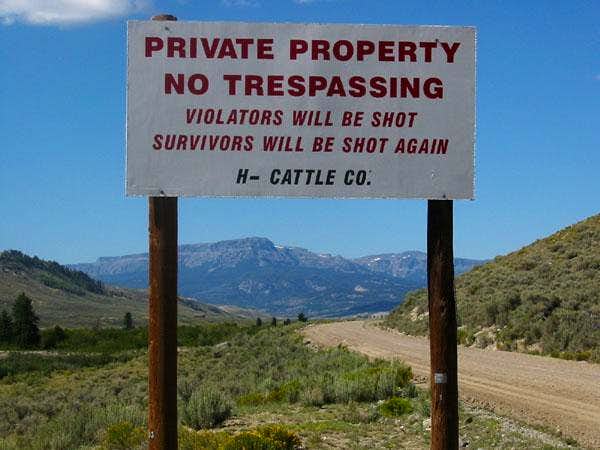 Eastern access to the mountain is problematic due to private land in the DuNoir valley.

This mountain is managed by Shoshone National Forest. There is an office and visitor's center in nearby Dubois. Hours: Monday-Friday 8a-4:30p.

Grizzly-Human encounters have become more frequent on the pass. As well as becoming habitat in the last decade, this pass has become the migration route for grizzlies leaving the Absaroka for the Wind Rivers. You should be prepared. This attack occured right here on the Pinnacles trail.

Summer season in the Togwotee/Upper Wind River area is generally July-early September with snow lingering into July and returning in early September. Winter Sports are popular in the area from late November to late May. There are two nice campgrounds; one at Falls just west of the Brooks Lake Road on Highway #26/287 and one at Brooks Lake. A private lodge operates at Brooks Lake. (When I went to inquire for this page, I was quickly and rudely chased away - no questions asked).

In Winter, the Togwotee Pass area is known for its powder snow and the sports that accompany it. In particular, it is renowned worldwide for snowmobiling with magazines and manufacturers both doing promo shoots here each year. Annually, 250"-375" of snowfall blankets the pass. Winter of 2007 was a very dry snow year with accumulations at 37% of normal. The snowpack depth on 1May07 was 37" (well below average).