This is a 2300’+ ascent day. Polar Circus is called the “showpiece of the Canadian Rockies and a must for all climbers” by Joe Josephson in his reknowned guide book “Waterfall Ice, Climbs in the Canadian Rockies”. It is one of the most sought after routes anywhere in the world. Featuring 2300’+/- gain with over 1600’ of waterfall ice spread out over 9+/- pitches, Polar Circus is a classic to say the least. Charlie Porter is credited for naming the route while on first ascent when complaining about setting up a station on one of the steep pitches, referring to his situation as nothing more than a “Polish Circus”. Polish became Polar in the translation. Within Polar Circus is a feature named the Pencil which rarely forms to the ground, but when it does it is one of the finer WI 6 pillars anywhere.

Polar Circus is just to the south of the Weeping Wall area located on the west flank of Cirrus Mountain (10,720’) on the east side of the Columbia Icefield Parkway north of the Mount Wilson ice climbing area in Banff National Park, one of four connecting national parks making up the central Canadian Rockies. Mounts Nigel and Wilcox are clearly visible to the northwest and Mount Saskatchewan is directly across the parkway to the southwest.

1. Size- The sheer length and sustainability of its pitches, particularly the upper pitches divided into three tiers, the last of which is 100 meters of pure vertical ice, WI 4-5.

2. Access- The approach from the Icefield Parkway to the first ice may last all of 15 minutes. However, many bypass this lower easy ice to the left via ledges that circle back around to the first real climbing pitch, a classic WI 4 that leads through a rock band at the top. It takes about one hour to reach the base of what is now considered the first of 9 pitches that make up Polar Circus.

3. Southern Exposure- Of course this can be good and bad. Good for warmth, not so good on the upper tier where the ice starts to crackle and pop if you are void of any cloud cover. The Ribbon particularly gets strong afternoon sun starting in March.

4. Rampart Creek Hostel- manned and open in the winter almost exclusively for ice climbers/skiers. In the winter of 2007 they were having problems with their power and water sources and were sporadically closed. Check ahead as there are no other services within this area in the winter.

The lower pitches form early and the route sustains itself for some time due to its location, altitude and topography. The upper three tiers represent 5-6 pitches of solid WI 4-5. Avalanches from the slopes of Cirrus Mountain above are a serious hazard, so be aware of local avalanche conditions. Polar Circus is situated just south of Weeping Wall, and about 27kms north of Saskatchewan Crossing in a deep gully. Park along the highway just south of Weeping Wall (no pullout) and head east on level ground through easy trees towards the ice. As most climbers do, we bypassed the first ice to the left. Ascend a steep snow slope to the left and then circle back south and drop down into the gully and ascend to the base of the first pitch. 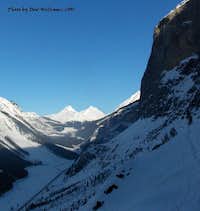 1st Pitch- 50m (photo)/ Represents a classic WI 4 pitch with easy climbing at the start and then the pitch steepens for an aesthetic ride only to lay off again as you reach a rock band hole you must mantle up and over. This rock does not provide a whole lot for holds, just rub those freshly sharpened crampons on some rock. Once through the hole, look for chains to the upper right.

2nd Pitch- 50m (photo)/ Drag the rope through snow until you reach the 2nd pitch which is a much easier pitch at WI 3. This pitch could easily be soloed by competent parties. The right line was the easy ice in 2007. Again, look for chains to your right after you top out.

3rd Pitch- 40m (photo)/ Continue dragging the rope via a snow trail as the pencil (or what’s left of it) comes into full view. At the base of the pencil is some more ice, WI 2 in 2007, that can be easily soloed up to chains on your left after you “turn the pencil” to the right. Get a good look at the condition of the Pencil pillar (photo) as that is your “free air” rappel coming back and you could be coming back in the dark. You will not want to kick the pillar with your crampons on rappel. It was in a very precarious state in 2007. We just slid off into the darkness on our return rap.

4th-5th Pitches- 65m (photo)/ Continue to the right 200m and up through some trees before hooking back left and crossing an exposed snow basin for 150m back into the gully and then proceed up to the base of the first tier of the upper pitches of Polar Circus (photos). Beware of avalanche danger through this area. I combined these first two pitches of the upper/steeper portion of the route by having my partner simul climb the route after I reached the end of 60m ropes. The top portion of this tier starts relaxing at just the right time for this to work. I am not recommending this practice, it is just what I preferred to save time and avoid exposure to falling ice and rock from above. This is a sustained pitch that more than likely will take most if not all of your screws. Once at the top of the first tier, head for chains above a small ice ledge to the right of the Ribbon.

6th-7th Pitches- 90m (photo)/ The 2nd tier starts off with a pillar known as the Ribbon. It was fairly kicked out in March 2007, but is still quite a vertical pitch. Voids here and there leave it somewhat overhanging. We moved from right to left to avoid these obstacles. As it ascends, the Ribbon kicks back into a broader curtain and is easily ascended to the left for the 7th pitch. It offers more challenging climbing to the right. You will have to make this station into the ice. The 7th pitch takes you to the bottom of the 3rd and final tier of the upper pitches where you can feast your eyes on the massive final and most challenging, 100m curtain. Place some screws for directional and head due right for chains on the wall to the right of the base of the 3rd tier.

8th -9th Pitches- 100m (photo)/ Hope you saved your strength. Definitely the crux of the route and where the WI 5 rating comes in. This is a massive sheet of ice and lines vary from left to right. You can find sustained WI 5 to the left for the entire two pitches via a hanging belay or take the easier road to the right which is sustained WI 4 with just a hint of WI 5 here and there and a more comfortable belay out of a normally formed cave.

Start right and meander your way trending right. Some of this ice will no doubt be wet. This first pitch steepens for the last 15 meters or so as you reach a small ice cave feature which should be evident up the right side next to the wall. Make an ice station here. This pitch in total is about 45m. The crux of the entire route is the start of the final pitch. The first 15m out of the cave is the steepest, hardest ice. From below it appears the next curtain above is more difficult, even overhanging, but once you swing out of the cave and look up, the next curtain above eases off as it angles back left compared to the straight section you are on. Put away these two 15 meter curtains and you have defeated the crux with easy ice to the finish.

Take two raps from the upper tier. Do not use the belay station at the base of the upper tier for your rap. Rather walk down the upper left hand side of the top of the 2nd tier and find some slings on bolts (2007) and this rap will take you to the very end of a stretched out 60 meters to the bottom of the Ribbon. Use the chained belay station you used on ascent and rap down to any number of small benches on the first tier to set up a V thread and make an additional rap. 70’s might make it all the way. Do not retrace your steps. Instead head straight down the gully to some chains on your left. Rap down a short section and walk down to the top of the pencil (photo) and rap off of some chains to your right. You will no doubt be rapping off of a broken pillar. Be careful to slide off versus kicking into the pillar and possibly causing it to collapse on top of you. This is a long free air rappel. Use a prusik backup and/or fireman’s belay for those following you. Return your steps from there to the top of the 2nd and 1st pitches and rap off of their belay chains on the left. We retraced our steps on the descent from there, but there is no doubt more rap opportunities off the final ice to the bottom of the valley floor.