After much
deliberations, the final people that got together for the trek to Rajgad were myself, Manasi, Yuvaan, Amya, Amlya and Pintya. And, a friend of Amya’s –
Sachin Gadgil accompanied us. 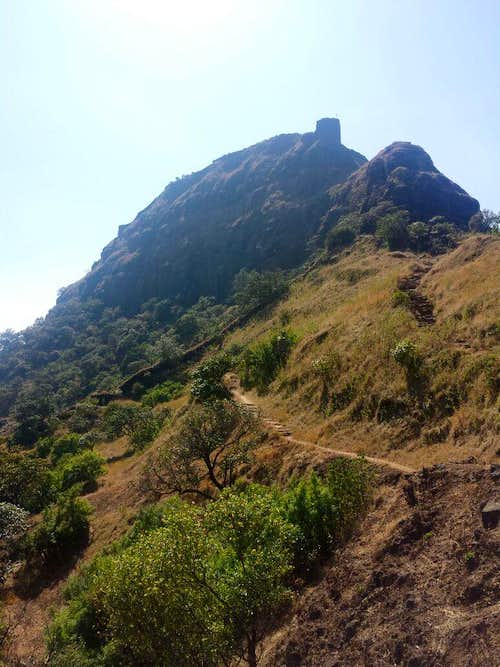 Way towards Nedha (hole in the wall)

We had decided to trek up the fort not through the usual route of Gunjawne, but through Pali darwaja (door), which would prove to be a much easier route for Yuvaan! 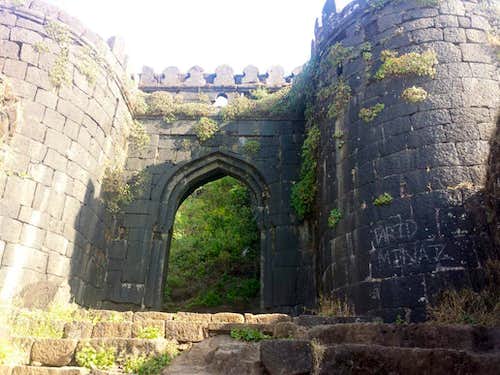 Main entrance - from Pali side.

On the way to the foothill, we got stuck really bad in the traffic jam, which was due to some accident that had taken place. Once we got out of it, amlya took a turn into Khed-Shivapur, telling us that he knew a shortcut to Pali. 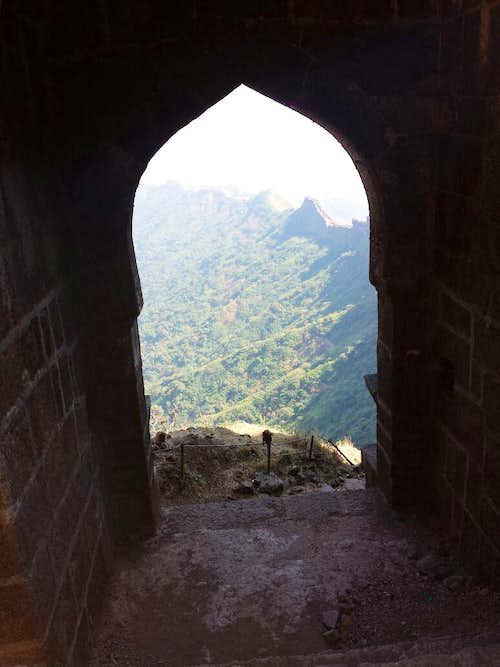 View from Bale Killa
It turned out to be untrue, and we ended up coming back to the highway! When we were stuck up, we
even thought of going up the road to the ghats of SInhagad, climb down, and go through Paabe ghaat to Velha and further to Gunjawne and Pali. 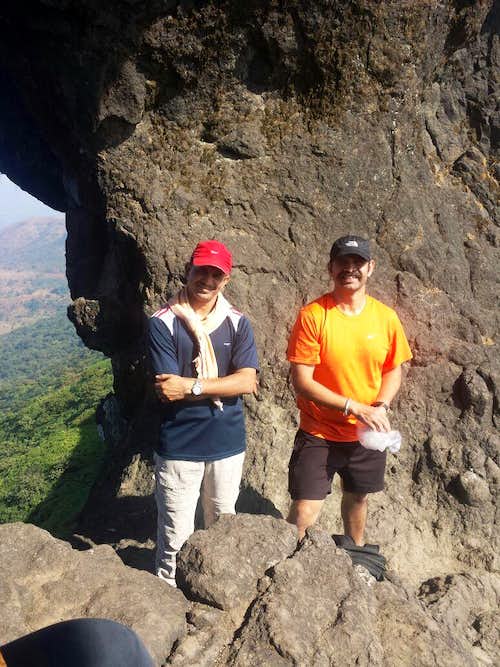 Me and Sachin at the Nedha
After an hour’s drive, we reached the site where Amya has his farm house plot. He had some work, and also wanted to visit his plot. We advised him against doing it, as we had gotten late already. So, we drove further from his plot scheme, and reached the village Pali, from where the trek to Rajgad via Pali Darwaza starts. 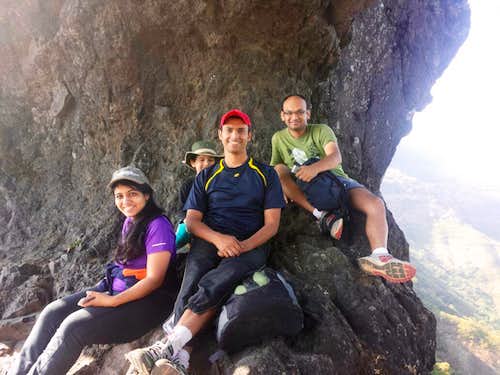 All of us at the Nedha
We
enquired about the availability of lunch when we return back, and before getting started for the trek , had a good breakfast. 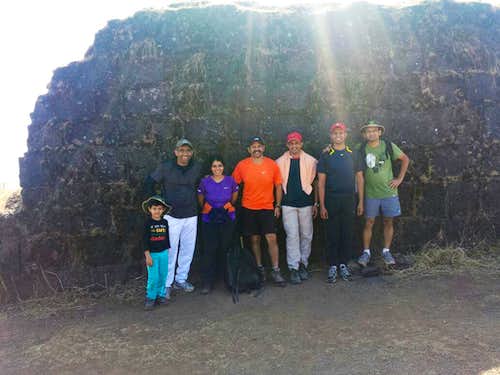 All of us on Bale Killa
The breakfast was Pohe and Upma, with chaha and biscuits, which the local guy sold to us. We filled our water bottles and started off on the trail. 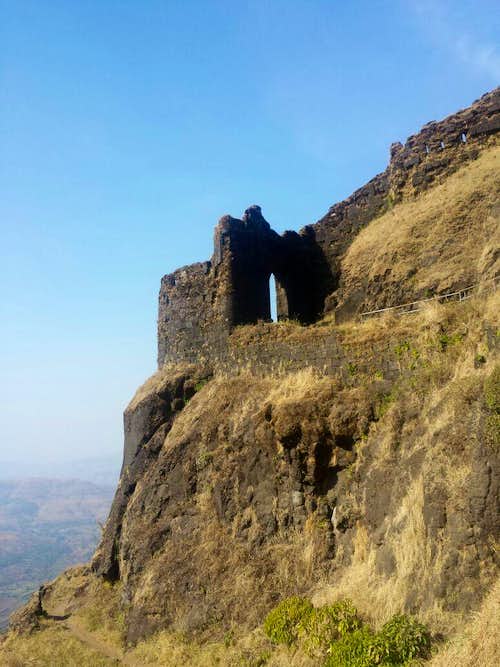 Fortification
To our shock, we saw huge lamp-posts being erected, with steel wires going up. There were a couple of men huddled near the lamp-post, who told us that a cable car is going to start soon. There it goes – one more fort on the verge of getting ruined, we all thought. 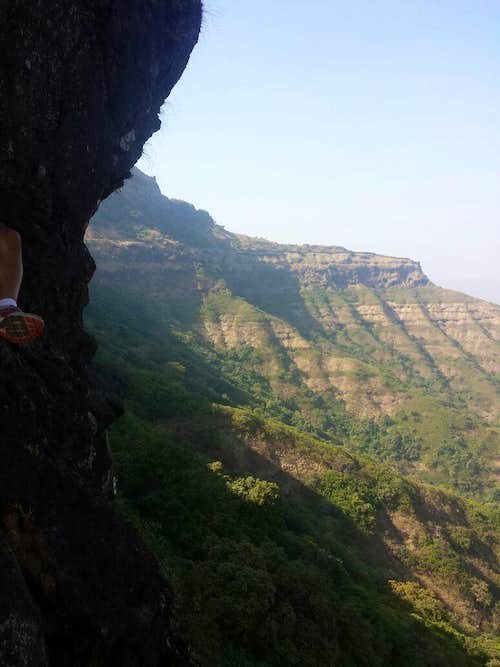 Looking out from Nedha (Sitting in the hole)
We started climbing up the trail, which was gradual in the beginning, but got a bit steeper towards the end. It was very bright and sunny, and Yuvaan was climbing up with full speed. I had to actually make him stop, make him sip a few sips of water, tell him to slow down a little bit, and then climb up with him. At one point in time, the trail ended, and we were forced to climb up rock-stairs. These were huge stairs, which makes you almost do a lunge, when you are climbing. After about an hour or so, we reached the top of the fort, from where we could clearly see the trail coming up from Gunjawne. It was a longer trail, and had we taken it, it would’ve taken us longer to climb up. 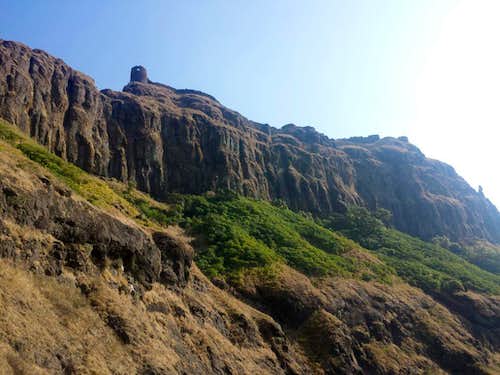 Rajgad, from its base village

Once on the fort, there is a clear bifurcation – one trail goes up to the Baale-Killa (a mini-fortress at the maximum height on the fort), which acts as a final defense
when enemy attacks you, and one trail goes to the “nedha”, which is nothing but a huge hole in the wall, which either has taken place due to some enemy’s cannonball, or pretty much due to wind-erosion. It seems unlikely that wind can erode a rock to such an extent that about 15 people can comfortably stand in it. I guess, it probably is a result of a combination of both. 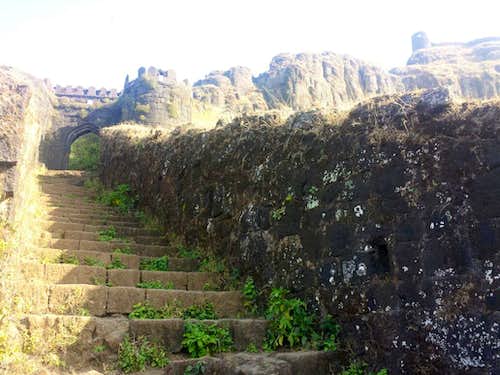 Steps up Rajgad, towards the end.

We decided to go and climb up the Baale-Killa first. The trail ends at a place, and all you see is a rock face, which would have been a very difficult one to climb up, had there not been the steel bars and chains hanging from them. About 2 – 3 rock patches later, we were at the main gate of Baale-Killa, from where we could
easily see the Suvela Maachi, on which the nedha exists. The second maachi – Sanjeevani Maachi is the one which you climb down, to go to the ridge that connects
to Torna, another fort which Shivaji Maharaj owned. In fact, that was the first fort that he won in a battle. The trek from Rajgad to Torna is quite a good one. 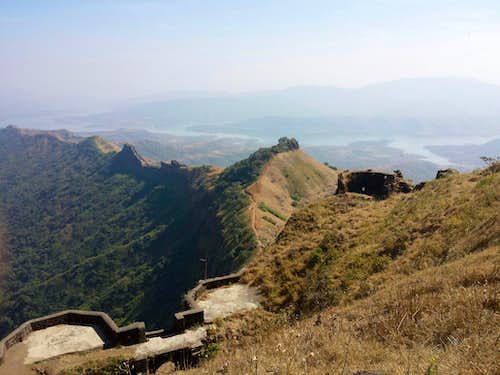 On the Baale-Killa, we could see remains of ancient temples, homes and water bodies, which most probably were used by the people a couple of centuries ago. It had gotten hotter, and we were desperately looking for some shade. It was a great relief to stand near a wall, which blocked us from the sun, where we took the usual
photos of the entire group. Once we were done roaming around on the Baale-Killa, we descended. Descending wasn’t exactly an easy job, with people coming up, and people like us going down, with only 1 support system on the rock faces! But, somehow we managed and took on to the trail going towards the nedha. After about half-an-hour’s hike on the trail, we reached the nedha, where it wasn’t easy to climb up to. We slowly climbed up the rock patch that took us to the nedha. This was a treacherous climb, as there is a deep valley at the other end of the nedha, and from where you are climbing; it’s about 30 ft. steep. If you fall on your back or your head, you are gone. Once at the nedha, we took a long break; had fruits and biscuits that we had bought. Yuvaan had a good amount of biscuits, followed by water to hydrate his body. The cool breeze in the nedha was something that could’ve easily put us off to sleep. But, this is exactly something that everybody should avoid. If one dozes off at the nedha, and loses his / her balance, then that’s the end of his / her life. 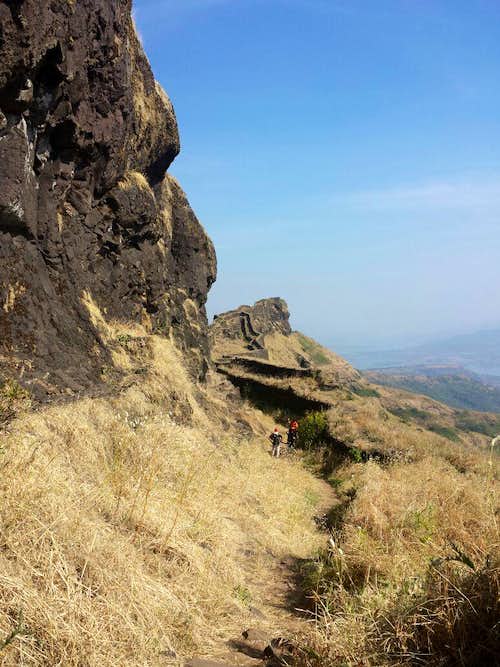 The way to the Nedha (hole)

After a lot of snacking and chatting, we carefully descended from the nedha, to walk back to the main entrance of the fort. This is when Yuvaan had a terrible fall on the trail, as he was concentrating on how deep is the valley on the right! With a few scratches, he was OK, and he was up and running again. Once we reached the
main entrance, lots of trekker crossed us, who were going towards the nedha. Sachin was the man in the front, and Yuvaan was walking with him, at his pace. On
a trek, Yuvaan always wants to stay ahead of everybody else. I don’t know from where has he gotten this competitive spirit. 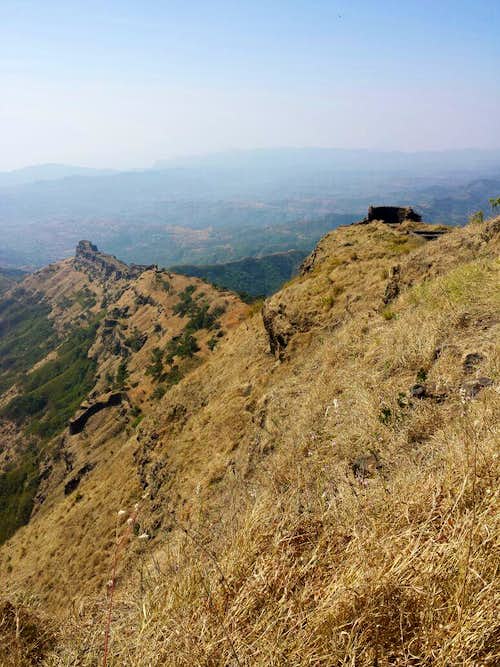 Sanjivani Machi - the route on right goes to Torna
Our descend started, and the sun shone so brightly upon us that we felt we will melt down! But, slowly we got done with the rock-steps, which are the worst to descend, followed by the trail. When the trail was just about to end, is when Yuvaan almost gave up. He started asking as to how much was left, and how much do we have to walk? For a kid his age, he walked quite a bit, with the climb, Baale-Killa and the trek to the nedha.

We hike down to where our cars were parked, and went to the same place to have lunch. We had a sumptuous lunch of Pithla-Bhaakri, along with the usual kharda at the local restaurant at the base of the fort. After the lunch, we all cleaned up a bit, changed into fresher clothes, and started our return journey back, determined
to come back for the Rajgad-Torna trek someday.