The ladders which are directly across the Mer de Glace from Montenvers have been removed. A new access route has been constructed on the cliff about two kilometers southeast from the removed ladders. The refuge website has a map of the new access:
https://refugecharpoua.wixsite.com/refugecharpoua/blank
Some further information is available from chamonairde:
https://www.chamoniarde.com/images/files/Acc%C3%A8s-Charpoua-2016.pdf 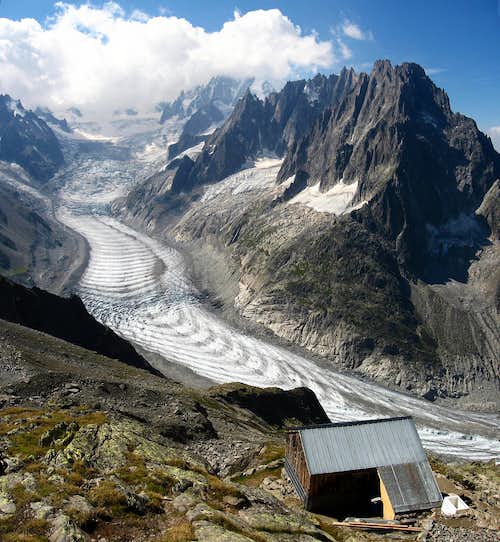 The refuge is placed at the altitude of (2.841m) on a rocky spur on the left side of the "Glacier de la Charpoua" and overhang the "Mer de Glace".

It is considered a real "refuge" because it's managed by a keeper during the summer (not every day). But due to its small dimension, it's used as a bivouac with kitchen and beds in the same room and open permanently.

Its location allows the approach to all the peaks that surround the Charpoua basin, like: Drus, Aiguille Verte, Le Cardinal, L'Eveque and La Nonne.

In addition to this, it is situated in a location wherefrom the view of the mountains around is one of the most beautiful in the whole Mont Blanc group.
Especially for the inpressive view to the Aiguilles des Grands Charmoz and Aiguille du Grepon.
For this reason it is very advisable a tour without mountaineering purposes. 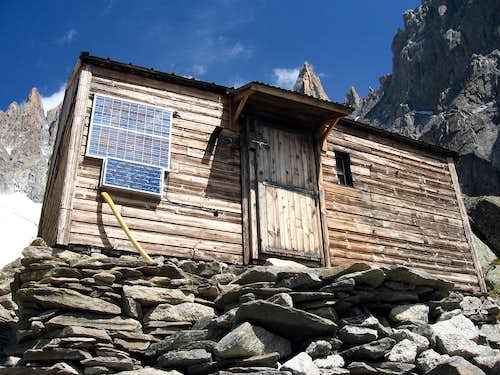 The starting point to reach the refuges is the "Montenvers" rail station situated 900 meters above Chamonix. (train ticket 25 euros return)

From the station follow the indication "to the refuges", on easy path in the begin and than same iron ladders permit to touch the flat glacier (Mer de Glace"
This part of the glacier is very worn-out; all the bumps and crevasses are clearly visible, so the rope isn't obligatory.

Once reached the flat glacier, point to the opposite side of it, exactly in front of Montenvers. A huge white square indicate the position of the first ladders (otherwise invisible from far).

7 ladders very steep and same steel handrails, permit to get the terrace made of grass and trees above the rocky cliff that surround the glacier.

From here follow the easy path that takes to the morraine in the middle fo the Charpoua basin. Pay attention during the crossing of the slippery rocks below the glacier de la Charpoua. Risk of blocks of ice tumbling down from the glacier. A yellow signal indicate the dangerous part of the crossing.

Once reached the marraine, climb it on its edge. The refuge should be visible from there on the top of a spur at the and of the morraine. Same steel handrails help in the last few meter.
From Montenvers 3 hours EEA

Destinations from the refuge

View from the refuge

The ladders which are directly across the Mer de Glace from Montenvers have been removed. A new access route has been constructed on the cliff about two kilometers southeast from the removed ladders. The refuge website has a map of the new access: https://refugecharpoua.wixsite.com/refugecharpoua/blank Some further information is available from chamonairde: https://www.chamoniarde.com/images/files/Acc%C3%A8s-Charpoua-2016.pdf