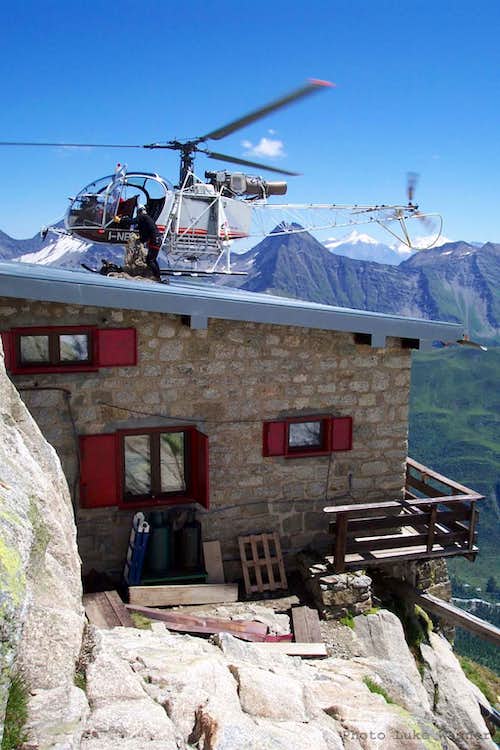 The Rifugio Boccalatte-Piolti 2803 m  (C.A.I. Club Alpino Italiano) was originally named Refuge Grandes Jorasses (it's still marked in this way on some maps) and is located on the way to the Normal route up that summit. The hut is dedicated to Gabriele Boccalatte and Mario Piolti from Torino, two alpinists fallen on the South Face of the Aiguille de Triolet in the year 1938.

The first wooded structure was built on the present site in the year 1881, then a stone structure was built in the 1930s. A tin roof and wooden walls were installed in 1984 and in 2001 the building was equipped with solar power and the kitchen was rebuilt. Most routes on the Grandes Jorasses including the Rochefort traverse, the North Face routes, and the East Face routes pass the hut on either ascent or descent.

The place where the refuge is located was identified in the year 1864 by Edward Whymper, who was trying to reach the summit of the Grandes Jorasses with his guides. In reason of the strategic position of the place and the magnificent panorama the hut was soon built in the year 1881 and was thus one of the first refuges on the Italian side of the Mont Blanc massif. Initially entirely in wood, it was built with stone walls in the 1930s, and has since been renovated several times: in 1944, in 1984 and in 2016. 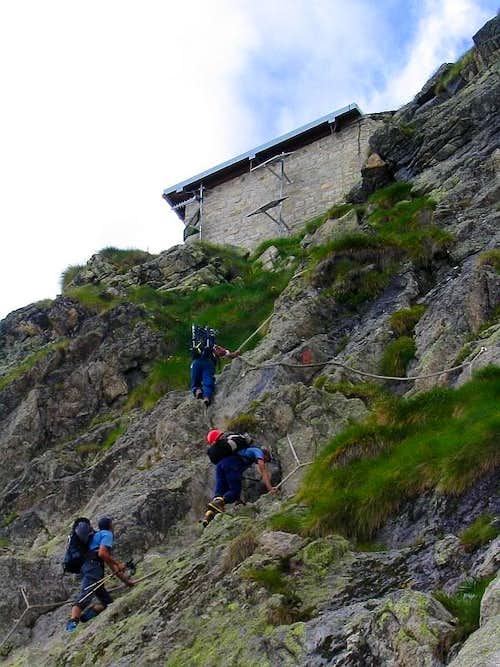 The ascent to Rifugio Boccalatte

From Courmayeur enter the Val Ferret and follow it to Planpincieux. Go past the village and park in a large parking lot on the left after the last houses. In the parking lot you will find the signpost of the path 21 for the refuge.

Take the path and find a crossroads on the right which leads to a small road through the hamlet (yellow arrow). The mule track enters the woods, passes the Planpincieux chapel, here it start the ascent through what was once a forest which was taken out by an avalanche in 2003. The trail becomes a winding path and continues towards the seracs, reaches a scree couloir, passes it on the right and enters a second couloir, keeping the left. Wade the stream and continue in the direction of a waterfall with some easy steps of I-II degree. Continue on the right rib until you meet a metal staircase to overcome a chimney. Continue on a moraine to its top, then proceed to the left among the debris in the direction of the cliffs on which the refuge is visible. When you reach the base of rocks, take a ramp to the right, equipped with fixed ropes. Follow the ropes to a pulpit, then follow an airy path rising to the terrace suspended on the glacier where it's located the refuge. Difference in level: 1250 m - Time: 3-3.30h, 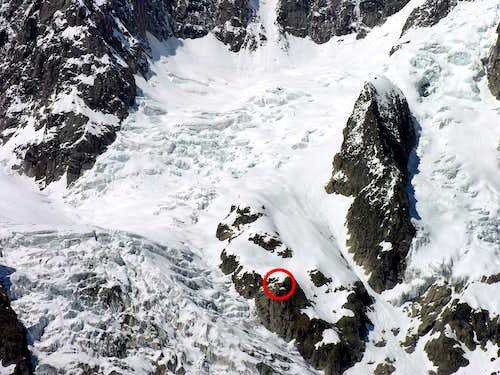 The Normal Route of the Grandes Jorasses is the the most commonly climbed route from the Refuge Boccalatte.