PHOTO ABOVE IS THE START 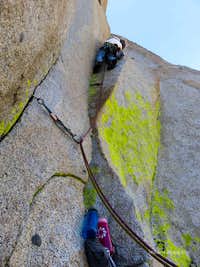 Dow leading the 4th Pitch, 5.9
The Spell (5.10) is by far the best route on the Warlock and in my opinion the most aesthetic climb at the needles. If you are into off width/squeeze chimneys (which the Spell is), the other side (southeast) of the Warlock has perhaps the 2nd best off width pitch in the area. A squeeze chimney on its 5th pitch that can, although a lot of fuss is made about it on MP.Com, be protected with C4#6’s. We took a Valley Giant as MP posters acted like that was necessary. However, once on the route, like many squeezes, the chimney narrows as it leads in allowing you to use #6’s for the competent OW leader. 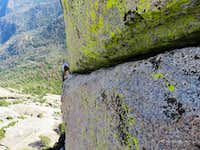 Dow leading the 6th Pitch, 5.9
The first time on this route, we actually got drawn off route onto Beckey’s South Face route (which was on our agenda anyway so we finished it). We returned the very next day to do the S Crack. The starts are very close and when on the 2nd pitch of S Crack, it is easy to stay with a great stem corner vs busting up and right on less attractive ground entering the S Crack system. Our 3rd pitch, 4th for most probably, was an outstanding pitch at the grade (5.9). That is when the massive crack system you are following starts to bend right (part of the “S”). The 4th pitch is also a good lead taken on a perfect hands vertical section that turns into a wide arching crack. The 5th pitch is the straight up wide squeeze chimney, full on blue collar. Yet followed up with another long good pitch (6th), a relatively easy 5.9 vs what MP.com calls sandbagged. One more pitch lands you to anchors that can be rapped quickly to the north end of the formation, just east of the Howling.

Hike into the Needles proper approximately three miles. The Warlock is to the east of the Witch and shares a col with Voodoo Dome. You could approach any of these Warlock south face routes from the same approach some prefer for Voodoo. However, the hike down from where you normally leave your gear up at the main notch is short and simple. Contour around to the col between Voodoo and the Warlock. The first pitch is located about 4/5ths of the way down the south face. Stay on the Voodoo side as you descend a steep climbers trail in the bushy gully and look for the first pitch, a short wide crack (photo). Scramble up to some shade trees at the base of this wide crack and rope up.

750’+/-, 7 Pitches, 5.10
1st Pitch- 150’- 5.9+/ After scrambling up 3rd class to the base of the short off width, belay off of a platform up and left. I placed a single C4#5 in this crack and ran it out to the tree above. It is true to the grade and involves a variation of off width moves. Then scramble to the back left corner which is the base of a right facing hands corner. Belay off gear. Ants can be bad at this belay.

2nd Pitch- 150’- 5.9/ This is the easiest pitch to get off route. The day before we went for S Crack and ended up doing the South Face route because we stuck to this corner for too long. This corner to the top is an excellent pitch. However, you must exit this good corner and trend right and up into the massive chimney above to stay on S Crack.  There are two corners to the right that will lead up into the massive curving chimney above. One move right at the right spot, puts you into a shallow trough with micro gear. Two to three pieces of micro gear (a micro cam or two and/or brassies) before there will be no gear for 50’ of 5.9 climbing. If you exit the stem corner earlier, you can climb a whitish flake which connects via slab to a left facing vegetated corner that leads to a small ledge with an old slung rock (2017) with a low angled vegetated flared shallow chimney above. I basically ended up exploring both ways and the right (easier, better protected variation) had several old fixed pieces in it. The belay is not great, a small off set cam and a smallish block are the best you will get at this ledge.

3rd Pitch- 220’- 5.9/ From the right variation, climb the flared vegetated corner up to the roof and pull out left. Extend your pieces liberally to avoid rope drag. Enter the hanging corner system above via great climbing via two crack systems. Stemming, chimney climbing and jamming with good pro gets you to a comfortable belay at the base of the massive head-wall below a perfect hands splitter. The belay takes hands pieces as well. I had four and used two at the belay and two in the splitter (30’).

4th Pitch- 100’- 5.9/ Climb the dead vertical splitter that lands you up onto a lower angled off width/chimney (part of the “S”). If you brought a #6 or Valley Giant for the eventual squeeze chimney, it fits here as well. Otherwise a C4#5 will work at the crux which is at the top of this chimney where it constricts and you get pushed out to exposure. Follow easier ground to a comfortable belay among blocks with an old fixed station on the wall.

5th Pitch- 80’- 5.10/ The Valley Giant was made for this size of a squeeze chimney but #6's work further in as well. Climb up easy ground to the left and enter the chimney above. Stay to the outside and squeeze your way up to the top. It helps to place your gear on your left hip. We brought no helmets on this route in anticipation of this squeeze although you can easily dangle it below you. Eventually you reach a chockstone that does take normal gear. Continue up to a comfortable belay with a lichen covered dihedral out right (another part of the “S”).

6th Pitch- 195’- 5.9/ Climb the easy dihedral (for the grade) as it angles right. Eventually it turns into a horizontal with a hand rail. This pitch is more 5.8 than 5.9 even though beta posters refer to as 5.10. Place gear at will but make good extensions to avoid rope drag. Finish below yet another wide pitch. Medium gear belay.

7th Pitch- 150’- 5.7/ Stem up the chimney and go up and right following the road of least resistance. If you have ever done Imaginary Voyage, there is a fixed rap off to the right of its 2nd to last pitch. Aim for that.

With double ropes, we took two raps. However we skipped a fixed rap on the 2nd rappel which leads me to believe there might be an intermediate rap up higher as well that would allow you to rap this with a single rope. Our first rap did require double ropes (longer than 35m) to a station that is hidden. You rap down to a ledge and push out over the lower wall. Could be difficult to find in the dark. Then we rapped to the ground but bypassed another modern rap above a significant ledge.

Single from micro cams/wires to a C4#5. Bring some brassies for a 2nd pitch variation in case you decide to take it. A Valley Giant or Big Bros if you do not want to solo the squeeze. A #6 or two will work for the competent leader in replacement of Big Bros or a Valley Giant. The chimney does narrow further in. Doubles from C4 #.3 to #2. A few off set cams or wires. A dozen shoulder length slings. The 3rd pitch climbs into shade by noon in July and the route stays shaded from there. A single 70m works no worries, you might have to jump on Imaginary Voyage to the summit and rap the Howling, but I predict there is another intermediate station I missed on the rap at the end of S Crack. From the stations I located, it takes double ropes to make it work.