Though ease of access and simple routefinding make Avalanche Gulch far and away the most popular route year-round on Mount Shasta, the opposite side of the peak is distinguished for hosting the Hotlum-Bolam Ridge. The Hotlum-Bolam Ridge is a great intermediate route and is arguably the most popular and frequented alternative to Avalanche Gulch during the summer months.

Although most of the route is no more technical than that observed on the south side routes, late in the season open crevasses nearby on the Hotlum Glacier and possible icy sections en route to The Step dictate a level of awareness and experience somewhat higher than that held by some beginner visitors to Mount Shasta. The route generally climbs snowfields along with some rock as the summit is approached and has options for easier or more challenging terrain as time, experience, and individual preferences warrant. Excellent and scenic camping options are available, and several features will be seen with names like The Rabbit Ears, The Sharktooth, and even the aforementioned crevasses on the nearby Hotlum Glacier. The views are refreshing and the ridge offers a nice change and new experience for those climbers who may have already made previous visits elsewhere on Mount Shasta. 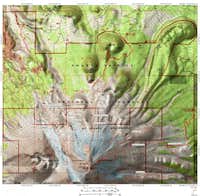 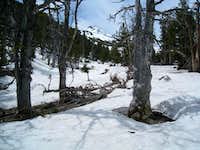 The Approach from North Gate

The most logical approach to the Hotlum-Bolam Ridge is from the North Gate Trailhead. The drive in to North Gate is a bit rough and more easily (and quickly) done by high clearance vehicles though this is far from a requirement and cars are frequently seen at the trailhead.

If it is early in the season check the USFS Mount Shasta Climbing Advisory for information on trailhead access or call the Mount Shasta Ranger Station directly. The road to the trailhead is not open in winter.

North Gate Trailhead (41.46840° N, 122.17401° W)
From Interstate 5 in Weed head northeast on Highway 97 for 15 miles until reaching Military Pass Road. Follow Military Pass Road for 3.6 miles to a junction with Andesite Logging Road and bear right as indicated by road signs. Continue on Andesite Logging Road for approximately five miles passing several forks and junctions en route to the trailhead. The drive is well signed from Military Pass Road and drivers should have no issue navigating the route (other than the rough terrain and possible bump of the oil pan). 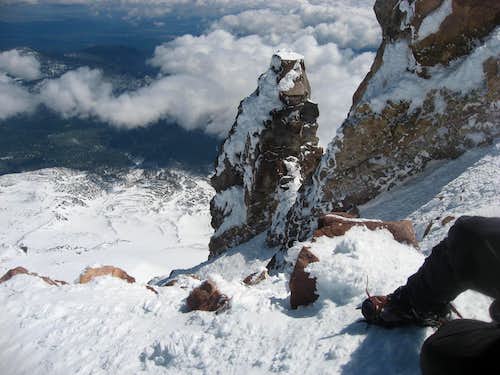 Above the Rabbit Ears

From the North Gate Trailhead follow the trail as it heads up to the open area south of the North Gate Plug at 8500 feet (even when snow covers the path it is generally easy to follow as you keep Mount Shasta ahead of you and the North Gate plugs to your right).

From the flat area at 8500 feet there are numerous route options in the immediate vicinity as the ridge is approached or reasonable camp locations sought out. No path is particularly better or worse than the other. See the Camp Locations section for a few possibilities on where to set up for a night. 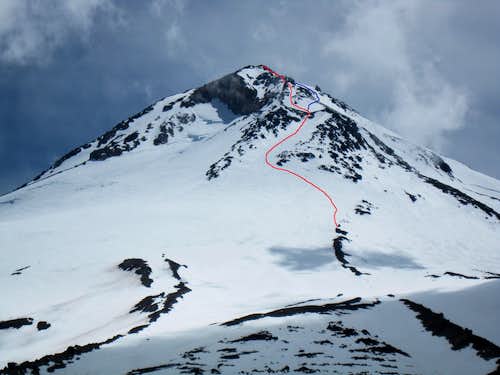 The Hotlum-Bolam Ridge is a great route for intermediate climbers in the early to mid season, but later in the season it can get more challenging as snow in some of the gullies becomes hard or icy.

Depending on your camp location ascend either directly up (if camping a bit east of the North Gate Plug) or climb diagonally to the east to reach the first snow ramp above the Hotlum Glacier. The ramp continues diagonally up and to the right above the lower rocks on the ridge. This first chute often forms icy patches within it later in the season, but they can usually be avoided. Also note the location of the crevasse on the Hotlum Glacier below this chute (if open) so that it does not cause problems on the return.

Once at the top of the first chute (named ‘The Step’) at 13000 feet there are a couple of options to reach the summit. Often climbers continue directly up a second snowfield until the ridge becomes rockier near two prominent and obvious rock towers called the Rabbit Ears. From below the Rabbit Ears most climbers traverse right a bit onto gentler terrain above the Bolam Glacier and make the climb up to the northern end of the summit pinnacle. Taking this option bypasses The Sharktooth (another prominent blade of rock at about 13,800 feet) on the left shortly before reaching the summit area.

Alternatively (and less frequently) climbers can stick more properly to the Hotlum-Bolam ridge from below the Rabbit Ears all the way to the summit by following class 2 rock on the ridge. Some rock of at least class 3 will normally be encountered depending on route finding and current conditions.

Descend via the climbing route. On the way down remember where the large crevasse is below the first chute. If glissading below The Step, stop and move to your left (climbers right) near the bottom often enough to be sure you are clear of the crevasse. The crevasse can be difficult to see from above. 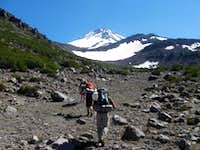 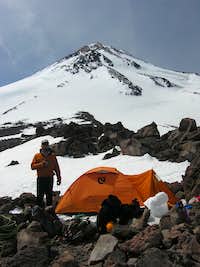 There are literally dozens of options for camp locations on the Hotlum-Bolam Ridge and there are perhaps more possibilities to spread out here than on any other route on the mountain. This is not to say the place will necessarily be all to yourself, however, as the Hotlum-Bolam is fairly popular in season once the trailhead opens in the late spring.

There are excellent camp locations throughout the area above the North Gate Plug ranging from the flat area at 8500 feet to rock outcroppings several hundred feet up the mountain. These are perhaps the most popular locations as they minimize the effort climbing while carrying a full pack.

For those seeking to camp high on the mountain, Marine Camp is an ideal location at 10,700 feet just southwest of the camp locations mentioned in the gully south of the North Gate Plug. There are several rock wall constructions scattered about and excellent views due to the location high on the ridge. Marine Camp lacks running water and is subject to more wind exposure, but it otherwise makes a promising choice. The location gets its name from the US Marines which have been known to camp there during training exercises though I have seen them in other areas around North Gate as well.

Another recommended area includes the moraine above and to the left (southeast) of the North Gate Plug. Once on top of this moraine at 9400 feet many feasible camp locations begin to come into view (I’ve also seen the Marines in this area). At 9500 feet a large flat area is encountered between this first and a second lateral moraine far to the east (this area is about one third of a mile wide at its base). The area often hosts several pools and runoff streams both here and stretching over half a mile up the mountain. A small seasonal pond even lies a bit out of the way near the eastern moraine. Though lower than Marine Camp the views are nice and running water is available for much of the season.

No special gear is needed for the Hotlum-Bolam ridge, just the standard ration of crampons, ice axe, and helmet... and take your wag bag too! Late in the season there could be a use for ice screws and a rope but generally these areas can be avoided and climbers seeking these conditions head over to the Hotlum Glacier instead.

The Hotlum-Bolam ridge is named for the Hotlum and Bolam Glaciers running on either side of the route. These glaciers, along with a few others, were named by western explorer Major John Wesley Powell.

“Powell was a brilliant scholar who collected over two dozen dictionaries of Native American languages and dialects. During 1879 he came to northern California to study the Wintun tribe, and climbed Mt. Shasta on November 1, 1879. Afterward, he named Shasta’s four other major glaciers with Wintun words in honor of the tribe: Hotlum (‘steep’), Bolam (‘big’ or ‘great’), Konwakiton (‘muddy’), and Wintun (the tribal name). The names were inscribed in official records maintained by the US Geographic Board in 1897.” – Andy Selters, Michael Zanger, The Mt. Shasta Book: A Guide to Hiking, Climbing, Skiing, and Exploring the Mountain and Surrounding Area (2006)

Camp at 9500 Feet below the Hotlum-Bolam Ridge