Clear Creek is the standard route on the southeast face of Mount Shasta, though it remains far overshadowed by the heavily populated Avalanche Gulch route on the southwest side of the mountain. Clear Creek remains an excellent alternative to the latter as it hosts outstanding views, alpine meadows, deep Mud Creek Canyon, and it is far less populated than most of the routes leading out of Bunny Flat. This route is actually the least technical on the mountain, having a gentler slope than Avalanche Gulch for almost the entire ascent. Despite the easier terrain, however, beginning climbers flock to Avalanche Gulch out of habit, year-round access (Clear Creek is inaccessible in winter and early spring), and the easier drive to the trailhead (although the dirt road to Clear Creek is navigable by most any car and the total distance is only 12 miles further than Bunny Flat if coming from the south on Interstate 5).

The route conditions vary considerably as the season progresses, ranging from nearly complete snow coverage from the trailhead to trails through scree for the entire route up the mountain. Parties climb it in all conditions, it just depends on your preferences. Very late in the season as fall approaches Clear Creek can even be the more popular alternative to Avalanche Gluch… following the correct use trails is fairly solid, the route isn’t subject to the late season rockfall that Avalanche Gulch has, and descending through the scree is much easier than the talus that appears on other routes.

In mid to late season running water is available at Clear Creek Meadows, and there are comfortable camp locations ranging from 8300 feet to over 9900 feet on the route. 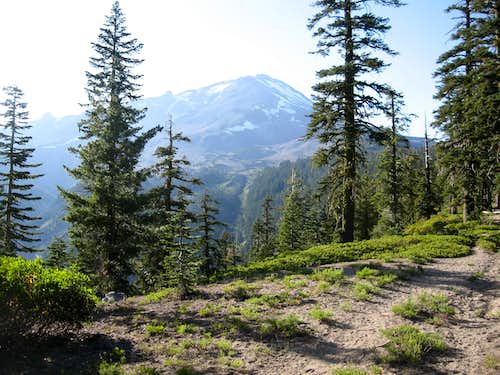 The only sensible approach to the Clear Creek route is from the appropriately named Clear Creek Trailhead. The drive in covers some dusty roads but is easily passable by low clearance vehicles. The forest roads are well signed and drivers should have no issue finding the trailhead.

If it is early in the season check the USFS Mount Shasta Climbing Advisory for information on trailhead access or call the Mount Shasta Ranger Station directly. The road to the trailhead is not open in winter or early spring. 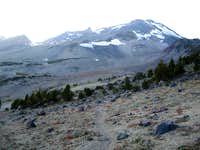 From the Clear Creek Trailhead simply follow the trail as it heads through red fir forest on the northwest side of Mud Creek Canyon. Initially the canyon is not visible, but as the trail climbs and the trees thin the route passes closer to the canyon edge and excellent views open up. Soon not only is the canyon visible, but Mud Creek Falls and Mount Shasta as well looming directly ahead.

After about 2 miles the trail reaches the base of Wintun Ridge at about 8300 feet of elevation. Soon possible camps are encountered and running water from snowmelt or springs is visible. Continue on the trail up to another half mile to reach Clear Creek Meadows and the springs feeding Clear Creek. Either snow or a use trail leads past the meadows to the beginning of the climbing route.

Take care not to camp on or damage the fragile alpine meadows… see the Camp Locations section below for details on overnight options. 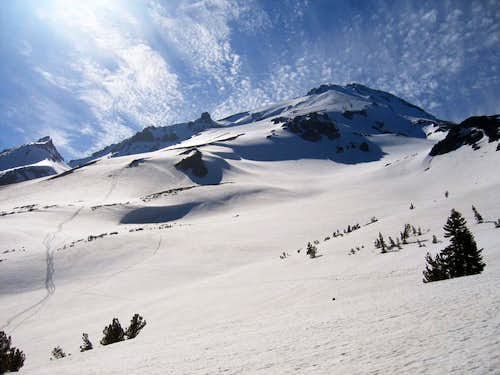 View of the Clear Creek Route

From the end of the trail at the west side of Clear Creek Meadows (or simply from the open Clear Creek Basin south of Wintun Ridge if everything remains covered in snow) continue on snow or a use trail gaining elevation slowly as you approach a small butte dividing the slope. Gain the long ridge in front of you by passing under the butte and climbing just left (south) of it. There is a good trail here once the snow melts out in the summer.

Once the ridge is gained above the butte the route is very straightforward and easily followed via a steady ascent to the summit. Follow the ridge straight uphill on snow or trails through the scree. As the season progresses conditions change from a broad snow slope, to fingers of snow in erosion gullies, to a series of use trails. Late in the season if you select the right trails the going is much easier than some have experienced. Generally speaking the softer, looser descent trail stays to the left of the ascent trails, towards the middle of the slope. The better ascent trails are towards the right and just skirt the left side of rock outcrops as you ascend to around 11500 feet. From here follow more trails just slightly to the right as the route climbs to the red rock as 12800 feet below the steeper terrain above.

There are a few options from the red rock (also known as UFO Rock and Mushroom Rock) as the summit plateau is approached on the broad ridge. Some take gullies to the left or right for the last 500 feet or so, but most climb straight up through a boulder field (the going here remains class 2 and is fairly solid). When snow covers the entire route the option to the right may be the quickest. Later in the season a trail traverses to the right to the gullies, but this is better for the descent. A fainter trail leads straight up from the red rock to the steeper area above. From the summit plateau traverse left around the summit pinnacle where the route joins the masses climbing Avalanche Gulch and the other south-side routes on the mountain.

The route is easy to follow in good visibility, but take care in poor weather. Descend the same route. 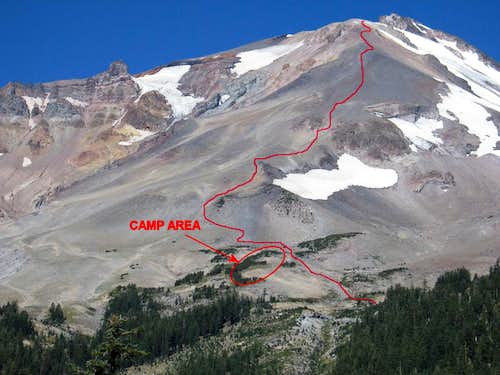 Overnight camping is a relatively luxurious option on the Clear Creek route when compared to some other areas on the mountain. Climbers often camp near Clear Creek Meadows just after crossing Clear Creek at about 8400 feet. The meadows are lush and beautiful in season, but take care not to camp within or damage the fragile alpine flora. There are several sites available in a band of krummholz trees climbing from left to right about 100 yeards past the meadows (see photo to the right), and fresh water available from the nearby creek… no melting or water filter needed!

Other camps are available before the meadows at the base of Wintun Ridge, and these may offer more comfort earlier in the season if the meadows are still snowcovered. Snowmelt can sometimes be found in this area.

8400 feet is about as low as any regular camp on the mountain (other than Horse Camp on Avalanche Gulch) and many parties instead prefer to take a summit day advantage by camping a bit farther up the mountain, both to help acclimate and shorten the climb. There are a number of excellent bivy sites on the top and side of the butte above the meadows that marks the beginning of the main climbing route (elevation here is about 9900 feet). See the route map for a visual description of the locations. These sites mark the normal high camp location on the route, though others have used precarious rock outcroppings and ledges even higher up the mountain (see the photo under Essential Gear below and to the right taken well above 11000 feet). 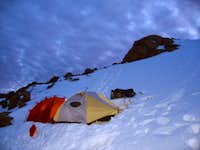 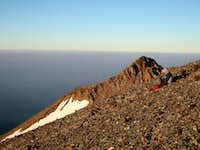 Crampons and ice ax, and many people will find trekking poles to be useful too especially if much scree is showing. A comfortable pair of boots or gaiters is advisable as well if the snow is melted out.

And don't forget your wag bag. This is a popular route and deposits are not welcome!!!

No fancy names here... the route is obviously named for the pristine spring waters of Clear Creek which emerge at the base of the climb. The names denotes a stark contrast to the slit and glacial flour filled Mud Creek just a short distance away.