Schneeberg with the summit Klosterwappen is the highest mountain of Lower Austria (Niederösterreich) and the most eastward 2000m mountain of the alps. Nearly the whole region is a water protection area (1 st Vienna water supply)

Near Fischerhütte is the summit Kaiserstein - named after emperors Franz I sucessful ascent in 1805 and 1807.

In summer (May to November) the rack railway (starting in Puchberg am Schneeberg) is the easiest ascent (about 1 hour walk to the summit).

Very nice climbs in Höllental (near Reichenau an der Rax)

North side: Puchberg am Schneeberg
South side: Reichenau an der Rax

by car: Form Vienna on the highway (Südautobahn - A1) to Wiener Neustadt - continue via Ternitz to Puchberg am Schneeberg
or (for the south side of Schneeberg) from Ternitz (continue an Semmeringschnellstraße - S6) to Gloggnitz to Reichenau an der Rax

by train: from Vienna (Südbahnhof) via Wiener Neustadt (you have to change the trains) to Puchberg or to Reichenau.
Puchberg and Reichenau bus transfer to the mountains (sometimes!!!)

Opertion of the rack railway started in 1897 with coal-powered steam locomotives, which have been in use until 1999. The steam locomotives are still in use for nostalgia trains. In 1999 new diesel operated Multiple Units called Salamander, which meet strict environment protection regulations, have been introduced.

When To Climb - Winter + Spring

The steep descents on the north side in spring

Info to "Breite Ries": descents from left to right:

Climbs on the north side

Climbs located in Stadelwandgraben (south side)

(all information in German):

Kienthaler Hütte: 1380m
usually, open from the beginning of May to end of October on the weekend
2,5 - 3 hours from Losenheim, 2,5 hours from Weichtalhaus
www.kienthaler.at

Heinrich Krempel Hütte: 1561m
hut of the Austrian Mountain Rescue (Bergrettung) - the hut is not open to the public (no sleeping facilities, no food - in winter ski tourist may get a hot tea)
2 hours from Losenheim

The hut is named after Heinrich Krempel (1880 - 1935) - a cofounder of the Austrian Mountain Rescue Service. 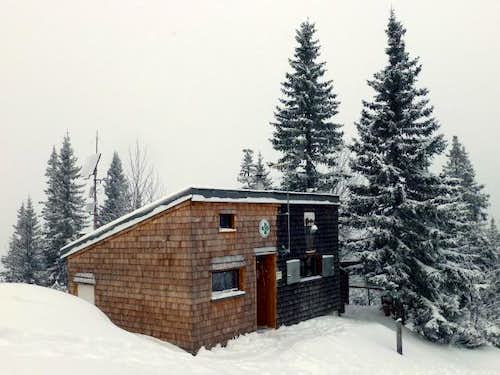 
Weichtalhaus: 563m
near Reichenau near the road
starting point for climbs in the Höllental
www.weichtalhaus.at 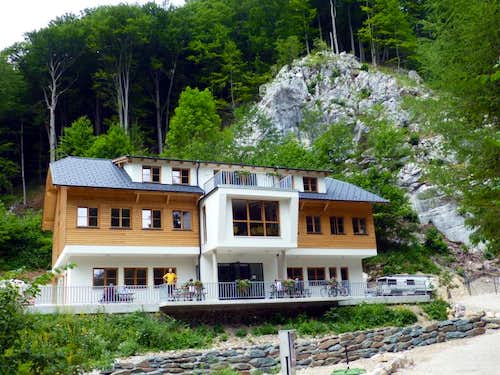 Fischerhütte is named after Fischer von Röslerstamm, who wrote the first guidebook of Schneeberg.

Usually the hut wardens give information