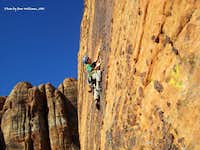 Wagassa, 5.8
“West Canyon” is located (you guessed it) at the west end of Snow Canyon State Park (7100 acres) north of St. George, UT. As you drive north through the park on its lone paved road, passing Island in the Sky on the right and the Enclosure and Balkan Dome on the left, the west end of the park opens up to much taller canyon wall formations in the distance to the west. These walls are white striped and thus comprised of even weaker rock than the somewhat precarious sandstone on the more popular routes in the park on Island in the Sky. All that being said, The Cheese Stands Alone (7 pitches, 5.11b) located in West Canyon is the hardest and longest, albeit somewhat dangerous, route in the entire park. 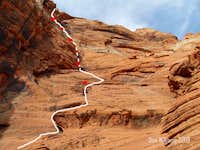 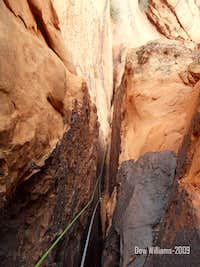 Babes in Thailand, 5.10a
West Canyon features only five published sport/trad routes (Todd Goss’s “Rock Climbs of Southwest Utah”) ranging from 5.8 to 5.11c. Despite plenty of steep wall space, the poor quality of rock has not led to any further development beyond these published routes. The West End takes quite a bit longer approach, compared to other crags in the park, approach to achieve the base of any of the routes.

Access is via the West Canyon day use lot or the Three Ponds trail head just beyond (north) the campground. Snow Canyon is full of Red Navajo sandstone, capped by an overlay of black lava rock. This process creates significant, but sometimes delicate climbing holds called desert varnish. I have taken a 25’ whipper when one of these varnishes failed. These few routes in West Canyon are not often climbed.

On my last trip to West Canyon we observed a Great Basin Western Rattlesnake. The wildlife is quite abundant is this section of the park. Please avoid walking on the microbiological soil. It is the dark crust that holds the surface layers together and prevents erosion. It takes centuries to reoccur. This whole ecosystem is much more delicate than most. Try to stay on the existing trail(s) and in the washes as much as possible.

The Routes are Listed Left to Right, South to North 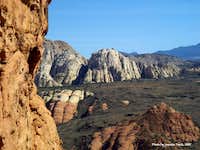 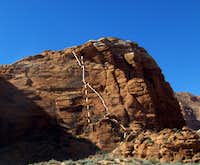 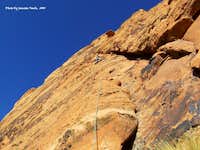 Babes in Thailand is another Ron Olevsky St. George classic. Meaning a combination of a stellar pitch (that most would never be willing to investigate enough to find) with some damn chossy and thus run out climbing. The first two pitches are easily combined on easy ground. Same with the third and fourth pitches. The fifth pitch is the before mentioned “stellar” pitch. A completely varnished chimney that you would have no idea was there until you are actually in it. This pitch goes at 5.9 and is reminiscent of Epinephrine’s chimney pitches at Red Rocks. The sixth pitch starts some of the scary climbing on loose and precarious red colored sandstone. Again the sixth and seventh pitches can be easily combined. The eighth pitch is the crux, 5.10aX, pitch of the route for more reasons than one. This is one of the worst quality rock pitches I have had to lead anywhere. It is a tough off width that you force yourself to squeeze through (hope you have a think frame) because of lack of trust on the crumbling mossy edges out right on the face. The sand covers you as pieces break off at just about every contact point. You can place a .5” that would not hold a fall in my opinion and then you must jam yourself up high to make a very long reach while stuck in the off width to secure a 4” that “might” hold a fall. From there, some more off width sandy stuff leads up until you can traverse left out of this nightmarish crack. The ninth pitch is an easy traverse and the tenth pitch was a 5th class scramble I led without a belay. Dow

Wagassa is a mixed route with fairly new bolts (2007) on the first two pitches, albeit a tad run out, and pure trad on the last pitch. By far the most critical point of beta regarding Wagassa is that you need double ropes for the rap. Todd Goss’s “Rock Climbs of Southwest Utah” claims it is a two rap descent. This information is dangerously incorrect. It is a two rap descent with double ropes only. There is no third rap station. Dow

Park on the left side (west) of the park road at the Three Ponds trail head. This location is right before you reach the campground on the right. The guidebook references parking further south (West End trail head) and accessing the area via the gated gravel road. However the Three Ponds trail is more scenic covering no more distance. You eventually cross the before mentioned gravel road. Continue following the trail markers. Before you descend into a broad wash, leave the trail to the left and make for a short scramble section up to the wall in front of you. The Cheese Stands Alone and Babes in Thailand are on the tall cliff to your left. There is a bivy at the base of this cliff, but that is not necessarily approved or needed. Wagassa and Fractured Rugosity are directly in front of you on the right side of the wall you are facing. You should easily identify Wagassa via the photos provided.

Snow Canyon State Park hours are 6:00am to 10:00pm. A day visit pass is $5.00 and camping spots are $15.00 to $18.00 (2007). Wildlife seasonal enclosures as of 2007 include all Hackberry Wash routes from March 31 to June 1 and all West Canyon routes from February 1 to June 1.
The sandstone rock at Snow Canyon State Park is not as solid as the lava influenced Black Rocks. As with most of the climbing in and around St. George, you should avoid climbing for at least 24 hours after any rain.

My favorite place for dinner is the sushi bar at Samurai, 245 Red Cliffs Drive. The best breakfast and coffee (Italian espresso) can be had on Main Street at the Bear Paw Coffee Company. The Outdoor Outlet is one of my favorite independent climbing stores anywhere. They know the climbing area well and have a great selection of gear at competitive prices.). Jazzy Java offers a decent cup, good sack lunches and free internet.

The climbing is good all year round with the exception of daytime during the summer months. If you are climbing anywhere in southwestern Utah during the summer months, you more than likely better get up early and finish your climb early. The walls get brutally hot. That being said, Snow Canyon is at a higher elevation than other immediate Saint George climbing areas (Utah Hills being the exception). In the dead of winter, the warmer climbing is limited to the morning hours on the West End routes.