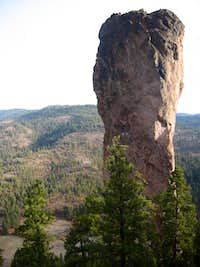 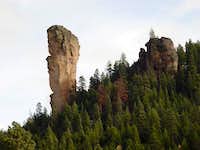 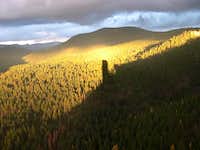 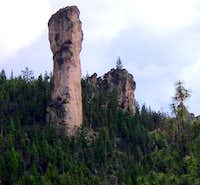 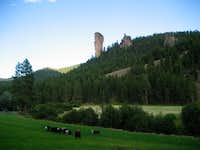 Steins Pillar is a 350-foot natural skyscraper that rises out of the gentle slopes of the Ochoco mountains in central Oregon just east of the town of Prineville. With its overhanging bulbous summit, it towers impressively over the Mill Creek Valley just outside the Mill Creek Wilderness. The farm structures lying at its base provide the onlookers with the correct sense of scale. The pillar is composed of rhyolite ash produced by eruptions from the Cascades that settled in an inland sea and compacted to stone – a natural process that apparently also spawned another impressive pillar in central Oregon, specifically Monkey Face. What is more directly relevant to climbers is that the rock is not terribly solid. Large swaths of it are in fact are quite chossy. This however does not take away from one’s desire to scale this impressive formation once seen from the overlook point.

According the the USFS plaque at the overlook, the pillar was named after the 1860's area explorer, Major Enoch Steen. The name was commonly misspelled and the incorrect version eventually became official.

Acknowledgement:
Mazamas Library in Portland, OR for letting me photocopy the article on the FA (see below). 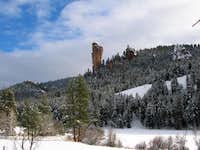 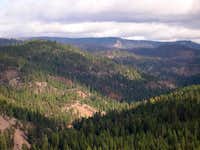 Steins Pillar is located approximately 16 miles east of the town of Prineville, OR. To reach the Pillar, drive US26 10 miles east from downtown Prineville to 200 yards east of mile marker 28. Turn left onto (paved) Mill Creek Road. Follow the road past the end of the pavement (at 5.1 miles from US26). Stay on Mill Creek Road for another 1.6 miles to the signed junction for Steins Pillar Trailhead.

If headed for the Trailhead: Turn right at the sign, cross a small bridge and follow the forest road (#500) for exactly 2 miles from the junction. The trailhead consists of a turnaround loop in the forest road (note the self registration box). From the trailhead, hike the well-maintained trail for 1.8 miles to the backside overlook (NOT the same overlook as mentioned below) of the Pillar. From there, stay on trail as it descends down toward the base of the pillar. The trail vanishes just before the base (below wooden steps). The hike-in takes from 30 minutes to 1 hour and involves approximately 700 feet of elevation change (rolling ups and downs).

If headed for the Steins Pillar Overlook: Stay on Mill Creek Road for another 2 miles (approximate distance) from the junction and look for a marked parking area (on right). Please note that hiking from the overlook to the Pillar directly would involve crossing private land – don’t do it! 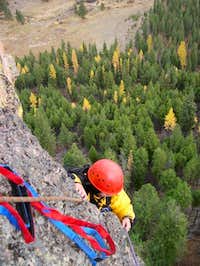 Self-issued, free permit is required for hiking the Steins Pillar trail (self issue box at trailhead). It is not clear (to me) whether or not a Northwest Forest Pass is required to park at the trailhead. Might as well display it if you got it. 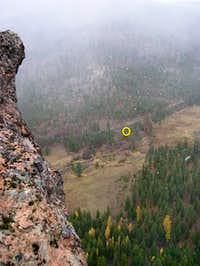 Presumably the climb can be done anytime the trailhead is not under snow. The elevation of the trailhead is 4300 feet which should make for a nice and long climbing season. We did the climb on October 30th and despite a brief snow storm that rolled by, conditions were pleasant overall. Reports on the web suggest climbs done as early in the season as March. Summers in central Oregon can be oppressively hot. 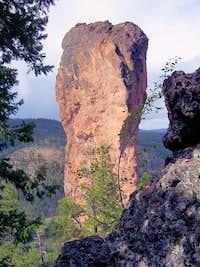 “Legal” camping is available at Wildcat Campground located at then end of the Mill Creek Road, 10.7 miles from its junction with US26. This information comes from Sullivan’s Eastern Oregon 100 Hikes/Travel Guide. Pit toilets and fire pits available.

Lastly, sleeping in your car at the trailhead is generally a good option as well. 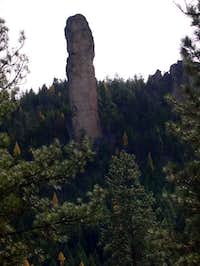 Steins Pillar lies near but outside of Mill Creek Wilderness. Contact the Prineville Ranger District at 541-416-6500. Best you can hope for is trailhead access and trail condition information – don’t expect climbing beta. 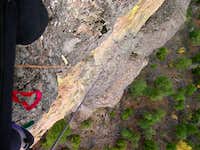 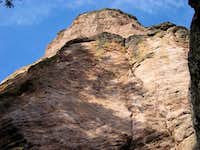 Northeast Face, III 5.11a or III 5.7 A3. First ascent (including first ascent of the Pillar) made by F. Richardson, G. Richardson, D. Baars, L. Rice, R. Shay in July of 1950. First truly free ascent made by J. Thomas, B. Ramsey, and A. Watts in July 1979. Note that the progressive accumulation of “good” fixed gear on this route has probably dropped the current aid rating to about III 5.9 A2 or perhaps even III 5.8 A2. NOTE: Mr. Baars had since corrected my list of the FA party that had actually made the summit. Quoting: Made first ascent of Steins Pillar in 1950. Acually, only myself and Floyd Richardson summitted, the others helped with drilling and belays as high as the high ledge. Richardson was a bird colonel in the Air Force and was killed in action in Vietnam. This is a nice picture story of your climb! Thanks! Don Baars. Mr. Baars further reports (see here): I have a copy of our 1st ascent register note from 1950 on Steins Pillar. Scribbled on it is the 2nd ascent by Fred Becky, Eric Bjornstad, Steve Marts, and Dave Beckstead, dated Aug-26-63. That's 13 years after the 1st ascent. So I guess Becky,et al. did beat Layton Kor to the second ascent, if he climbed it at all. Becky, Bjornstad, Dan Davis and Dick Springgate climbed it again in 1964 - the 3rd ascent? They made it in 12 hours.

Variation, IV 5.7 A4. This is a variation to the above Northeast Face route where the grade IV refers to the overall push to the summit. This variation substitutes the first two pitches (5.5 and easy aid pitch) of NE Face route with 2 pitches of hard A4 “choss” nailing. First ascent made by K. Schmitz and D. Caldwell in July 1965. See photo below.

Information taken from Oregon Rock A Climber’s Guide by Jeff Thomas and A Climbing Guide To Oregon by Nicholas A. Dodge.

Published Material And Other Sources 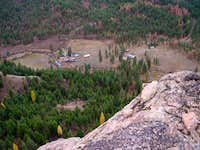 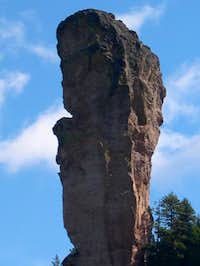 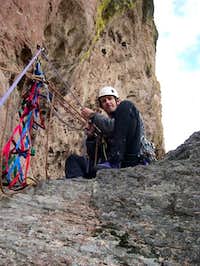 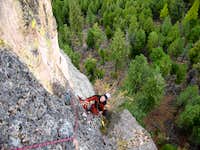 (1) Oregon Rock A Climber’s Guide by Jeff Thomas (Mountaineers, Seattle 1983). Thomas describes two routes on the Pillar and one variation, specifically: Northeast Face, III 5.11a; Variation (to NE Face), A4; and Southwest Face, III 5.10d. The description includes an accurate photo topo for Northeast Face and the Variation. The descriptions are quite good (descriptions given for free climbing the routes not aiding them though) as is the photographic topo. Don’t follow Thomas’ approach advice or you will be trespassing on private property – instead follow directions to trailhead above. Based on firsthand read of the material.


(2) A Climbing Guide To Oregon by Nicholas A. Dodge (Touchstone Press, 1975). Dodge describes the above-mentioned routes: Northeast Face route (rating it III 5.7 A3); Variation (rating it at IV 5.7 A4 – the grade IV rating reflects the Variation and the finish via NE Face route); and the Southwest Face (Dodge calls it the West Face and rates it at III 5.6 A3). The written descriptions are quite good esp. from the point of view of aid climbing the routes but the topo (an incomplete sketch of the NE Face route) is essentially worthless. Based on firsthand read of the material.


(3) Donald L. Baars, “The Unclimbable”, Mazama, December, 1950. This is an account of the first ascent of the pillar by Baars who was part of the original party. An enjoyable read with nice B&W photos of the pillar with climbers on it to show the true size of the formation. Based on firsthand read of the material. Acknowledgement: Mazamas Library in Portland.


(4) Cascade Alpine Guide Vol. 1: Columbia River To Stevens Pass by Fred Beckey (1st ed., 2nd printing). This is the excerpt from this out of print guidebook (note that 3rd ed. does NOT list this formation; not sure about 2nd ed.):

Stein's Pillar is a rhyolite monolith of amazing shape. Because it overhangs profusely on all sides, a member of the first climbing party described it as 'the most terrifying sight I have ever seen.' Its height above the lightly-forested hillside in the Ochoco National Forest near Prineville, Oregon, ranges from 375 to 500 ft. The first ascent was made by Donald L. Baars, Floyd Richardson, and Glenn Richardson in July 1950 after various attempts spread out over several years. The successful effort began on July 11; one member had to forgo the summit due to sore stomach muscles derived from the overhanging drilling. An early unknown party, about 1920, left a rope ladder hanging about 50ft above the first major ledge on the east face. The next attempt was by Baars, Leonard Rice, and Russell Johnson, who reached a position above the 'cave.' A new 4-day effort almost reached the last ledge, and almost ended in disaster when a rope wore through. It should be noted that on the original ascent 110 holes (5/8") were drilled, but most of the bolts were removed. Some of these holes are now unnecessary, and some bolts have been replaced. On the second ascent by Fred Beckey, Steve Marts, Dave Beckstead, and Eric Bjornstad, it was found that 5/8" expansion bolts and stubby 3/4" angle pitons fitted the holes best. Enlarging of holes has now required wider pitons to jam and stick; the best selection is angles 1" and larger, Leepers, wedges, and thick horizontals.

Thanks to Paul (Klenke) for providing this information. Additionally, Beckey provides a topo for the route. The topo is a bit out of date but route-finding is overall an non-issue on the NE Face route. A few details that Beckey has differently to what we did/saw. Anchor bolts for top of P2 are at far right side of "Second Ledge". P3 starts up a shallow dihedral at far left edge of second ledge with a couple of trad placements followed by fixed gear line. First fixed piece at start of P5 is way high and you either need to free climb up to it or stick clip it. Also, the ratings given by Beckey probably no longer hold. There are most likely no A3 sections on the route any more but on the other hand given the amount of bad fixed gear (body weight only), most pitches are more serious than A1 (A1+ to A2 I'd guess?).


Internet: The web is also a relatively poor source of information for climbs on the Pillar.

(2) A more recent TR from cascadeclimbers.com with nice photos:
Northeast Face TR 2. Check them out.

Thank you Sir. Corrected the FA information on the page with the appropriate note. Radek