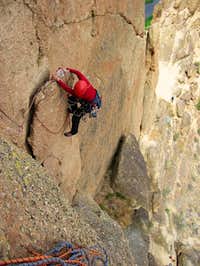 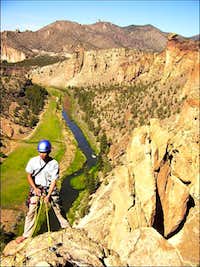 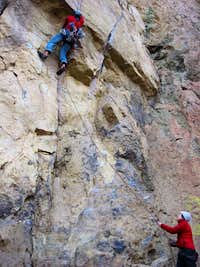 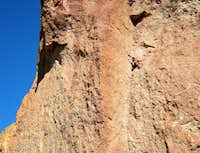 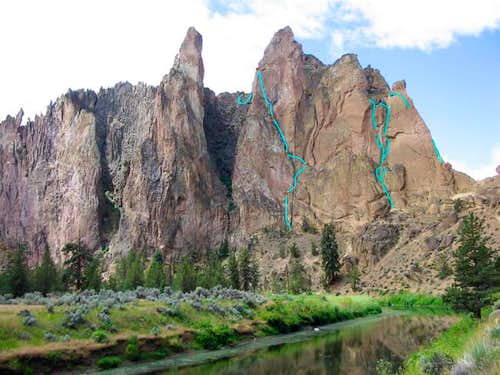 BEFORE YOU SUBMIT: NOTE THAT THIS PAGE IS NOT MEANT TO BE FOR SMITH ROCK STATE PARK AS A WHOLE! IT IS MERELY FOR A SINGLE FORMATION WITHIN THE PARK THAT SHARES THE NAME. Picnic Lunch Wall, Dihedrals, Christian Brothers etc. are not part of this formation. Submit misc. Smith stuff here. The Smith Rock Group is the prominent, free-standing rock "island" you see from Terrebonne. The twin peaks of Smith Summit (tallest spire of the formation), The Platform, and The Arrowpoint are its most prominent rocky summit outcrops. The Crooked River encircles the formation on the east, south, and west sides. Asterisk Pass lies at the northern terminus of the formation and is the low point between The Smith Rock Group and The Christian Brothers. Much of the rock on the Smith Rock Group is choss - there are however significant patches of high quality rock. The formation looks much more imposing from the east than from the west. Though several moderate and difficult routes reach the formation's high points from the east side, most of them hit poor rock for at least a pitch (and most of the traditional routes carry an R rating in Watts' guidebook). On the west side, several scree slopes provide 'walk-up' options that bring one to within a pitch of technical rock of some of the high pinnacles (East Smith Summit is the exception in that it's accessible only via the East Wall 5.8 X). See Peakbagging section below for more pinnacle climbing information. 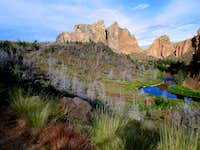 From the east side 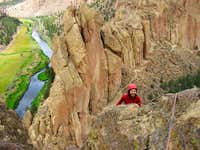 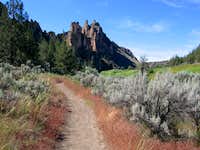 From the west side 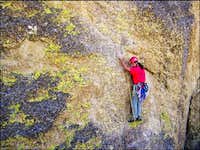 Smith Rock State Park is located outside the town of Terrebonne, Oregon (approximately 30 miles north of Bend) off of US highway 97. Those who wish to fly in usually do so via Portland, OR about 3 hours driving time (140 miles) northwest of Terrebonne. Take US 97 to the town of Terrebonne. Turn east onto B Avenue which shortly becomes Smith Rock way (there are signs for Smith on US 97). Follow the road past railroad tracks and down the hill to a signed intersection (approx. 0.75 miles from 97). Make a left onto NE 1st Ave. which then becomes NE Wilcox Ave. Follow it for about 1 mile to another signed junction with Crooked River Drive. Turn left toward Smith. Follow this road (passing the entrance into Smith Rock campground) until you see a roadside parking area on your left. Pay the day use fee ($5 per car per day) at the vending machine (or at the self issue station located in the driveway to the campground) and don't forget to leave a copy on your dashboard. The parking area has a public restroom and vending machines. Stopping at the above-mentioned billboard in the driveway into the state campground (you can pay the day use fee there as well as camping fee if staying overnight at the campground) is generally a good idea since it will allow you to see if there are any pertinent route closures. Follow the trail down hill toward the bridge over the Crooked River below. Cross the bridge and you will see a pointer sign. Make a left immediately after the bridge and follow the trail along the river passing beneath the Ship Rock (chossy, dark brown formation on the right) and the (crowded) Dihedrals. The Smith Group (initially visible from main parking area) comes into view as the trail rounds Ship Rock. At this point you have some choices. To access the routes on the east and south sides of Smith Rock Group, stay on the main trail along the river as it follows the base of the east side of the formation. To access the routes on the west side of Smith Rock Group, either head up towards Asterisk Pass or stay on the main (River Trail) as it rounds the southern tip of the formation and then goes on to the base of the west side. A Smith classic called Sky Ridge (2 pitches, 5.8R) starts right at Asterisk Pass and climbs the sharp arete on the north side of the formation. Go over the pass (the descent down the west side of the pass is definitely NOT a hiking trail - it is a stiff 4th class scramble with enough potential for a "damaging" fall to give many a pause) and turn left on a climber's trail that skirts below the west face of The Smith Rock Group. A good close-up shot of the north-east side of Smith Rock Group, where for example Sky Chimney is located, can be found here (photo by Brian Jenkins). 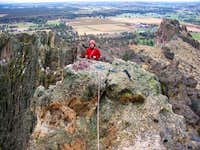 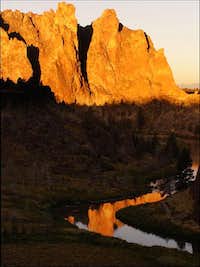 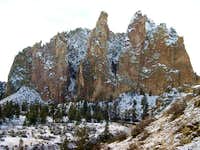 The park charges $5 per vehicle per day to park at the state parking lot. The park is "open" from dawn to dusk (or about 10 pm in the summer). The consequences of staying past "closing time" are unclear and some climbers do "moonlight climbing". The park allows dogs but is very strict as to keeping them leashed (fine = $96) and requests that you clean up after them. New regulation, as of March 1st, 2003: Owners of unattended dogs left tied in at the base of climbs will be given a citation. 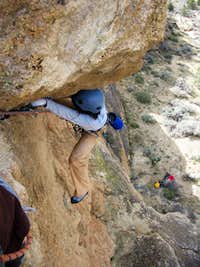 The park is officially open year round (though shower facilities at the campground are turned off in winter time). Climbing can be uncomfortably hot in the summer and snow often blankets the rocks in the winter. Spring and Fall are ideal as the temperatures are moderate and the east side of Oregon's Cascade Mountains is generally dry. Check with the park (or by calling one of the climbing shops below) for seasonal route closures due to falcon nesting. You will most likely be ticketed if you break the rules here as the locals often keep an active watch of the crags during closure periods. 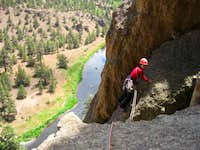 Smith Rock State Park operates a campground that overlooks the crags, in particular it offers an excellent view of the east side of the Smith Rock Group (see directions above under Getting There section). The campground has bathrooms and shower facilities (showers available summertime only) as wells as some communal picnic tables. Sleeping in cars is not permitted. The campground charges $4 per person per night (this will also allow you to spend a day enjoying Smith without having to pay the additional $3 day use fee). In addition, there is a free campground (BLM operated?) approx. 7 miles from the main parking area for Smith. Directions to this campground: Skull Hollow Campground. This information was provided by Brian Jenkins. Want to spend your time at Smith in the lap of luxury? This is especially nice during late/winter/early season outings when the days are short and nights are long. The Hub Motel in Redmond offers clean rooms (shower, fridge, cable included!) for $35/night (double occupancy). This price is most likely a "special" for climbers so be sure to smile at the nice folks in the main office and let them know the purpose of your visit. The motel (huge red neon sign) is located on the left hand side of US97 on the northern outskirts of Redmond, approximately 6 miles south of Terrebonne. 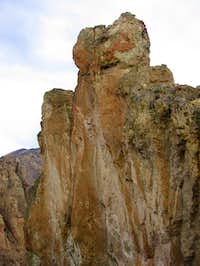 Smith Rock is part of the Oregon state park system. The official (though not very useful for climbers) website is here. A more useful Smith website is here. Redpoint Climbers Supply store located on the corner of US 97 and B Avenue (the turnoff to Smith) offers not only a complete selection of climbing paraphenelia but is a great place to inquire about route conditions including details such as bolt conditions and route closures (800-923-6207 or 541-923-6207, hours vary with weather and season). This is also the place to purchase the guidebook supplement (New Sh!tuff at Smith) mentioned below. Rockhard store is another option for route beta and climbing supplies. It is located about 100 yards before the campground driveway on Crooked River Drive. 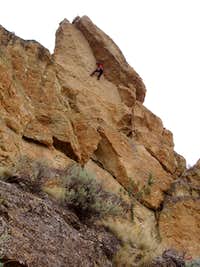 A Climber's Guide to Smith Rock by Alan Watts (one of Smith's climbing legends) is the main reference for Smith Rock climbing. The book offers a good selection of both route topos and route photographs. However, given the age of this latest edition (10 years) it does not necessarily contain all of Smith's routes and excludes (for example) the Wherever I May Roam route on the Smith Rock Group. A short booklet entitled New Sh!tuff at Smith by Ryan Lawson containing the latest route editions can be purchased at the Redpoint Climbers Supply store in Terrebonne, Oregon for $5 per copy. This is the only publication that contains the description for Wherever I May Roam route. It too however does not necessarily cover all the new routes. Note that all proceeds from sale of this booklet go to the American Safe Climbing Assoc. for bolt replacements at Smith. OUT OF PRINT 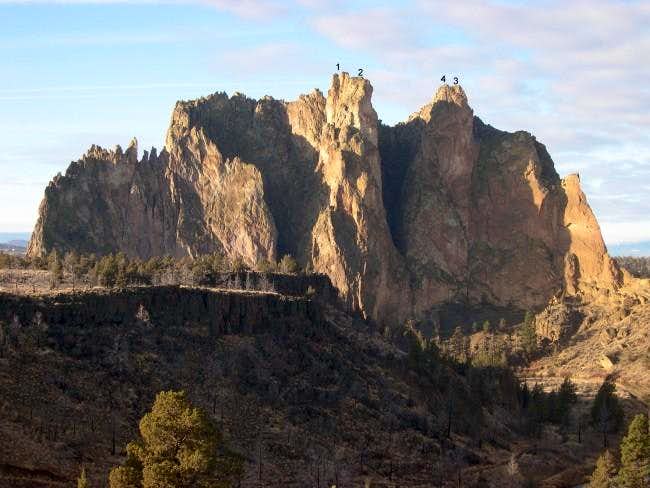 Smith Rock Restaurant in Terrebonne (behind a hardware store) is a great choice for after-climbing "pig-outs". The service is outstanding and food very good - both dinners and breakfasts. Note that it's closed Sunday afternoons. Burger Works in downtown Madras (20 miles north of Terrebonne) is not to be missed for their top-notch marionberry milk shakes. These are THE best milk shakes we've ever had - PERIOD. The place is located on the east/south-bound side of US26/97 in Madras. They also serve decent burgers and very good grilled hot dogs.