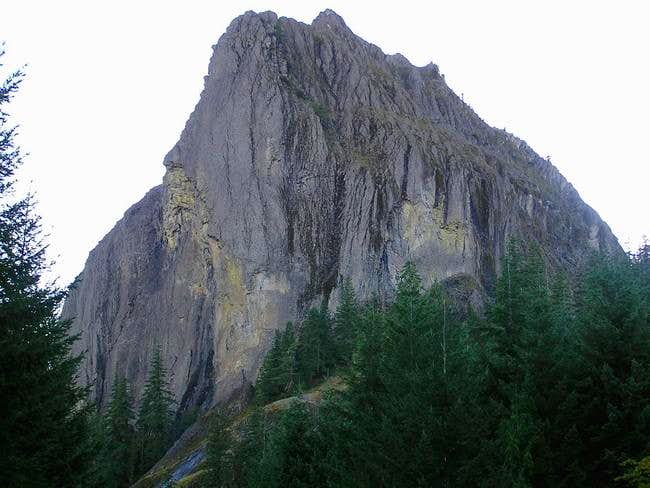 Wolf Rock, located centrally in the Oregon Cascades, is recognized as Oregon's largest monolith. This was the plug of an ancient volcano that has eroded away to the hard core. It's also been called Oregon's "big wall", but with about 20 established routes, that might be a stretch to lump it into that category. The rock towers 900 to 1000 feet above the surrounding area. The route that this peak is known for is Barad-Dur, an 8-pitch 5.11a route put up in 1972. There is plenty here for everyone though and the normal route is rated as Class 2.

Routes are mostly trad although there are some bolted one-pitch routes on the southeast side. The rock is loose with lots of runout on most routes. This peak does not appear to be visited by many as the most recent log entry prior to mine was almost 3 months earlier. Judging from those that sign the summit register, located in an old ammo box on the summit, anywhere from 5 to 20 people climb each year, although those are only the ones that sign the register.

The main routes are on the southeast side although there are supposed to be routes ranging from 5.4 to 5.9 A3 on the north side. Getting to the north side is an experience on overgrown old roads with trees that scrape the paint off your car followed by a bushwhack so thick you can't see a person two feet away. And once you get to the north side, the "routes" are moss-covered and look like they have not been climbed in years. Routes on the south side go from Class 2/3 to a new 5.11c recently put up. Most just do the southwest scramble route but there was a recent Barad-Dur entry when I was there.

Not much is ever written on Wolf Rock and when I mention it to people, mostly I just get blank stares, but maybe we just want to keep this little gem a secret. (well, a secret between summitposters) 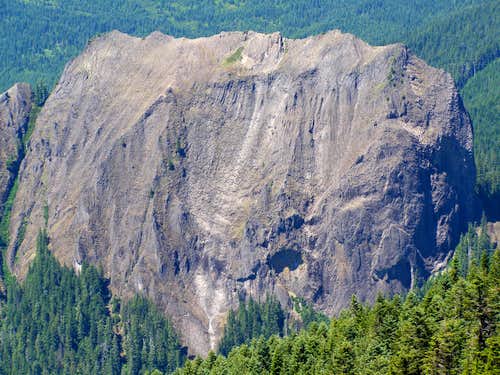 From the I-5 corridor, take Highway 126 east from Eugene/Springfield, OR. Take 126 about 44 miles east to Road 15 and turn left at the sign for the Blue River Reservoir. Staying on Road 15, you will go 13.6 miles to the climbers trail for the normal route. If you are looking to do any of the technical routes, you will want to continue 1 to 2 tenths of a mile further until you see the opening in the trees on your left that shows the "arch" in the rock. Park in one of the pullouts on the side of the road. Any number of climbers paths lead up to the rock routes on the east face. To access the north face routes, head right along the base of the rock. It involves some bushwhacking but is the best way to get there.

Other markers on the road in:
-About five miles in, the pavement ends and you will fork right to stay on Road 15

-The climbers trail for the normal route is exactly 9.0 miles from where the pavement ends.

-Climbers trail is 1.9 miles from the Wolf Rock sign on the side of the road that tells a little history of the rock.

Note that the trail is not easily seen. It starts through some trees right at a drain pipe under the gravel road.

No fees or permits.

According to the Ranger District, there are no seasonal closures at this time for any nesting raptors but you are asked to report any observed or if you get dive bombed. Could be closures in the future if there are any nests. 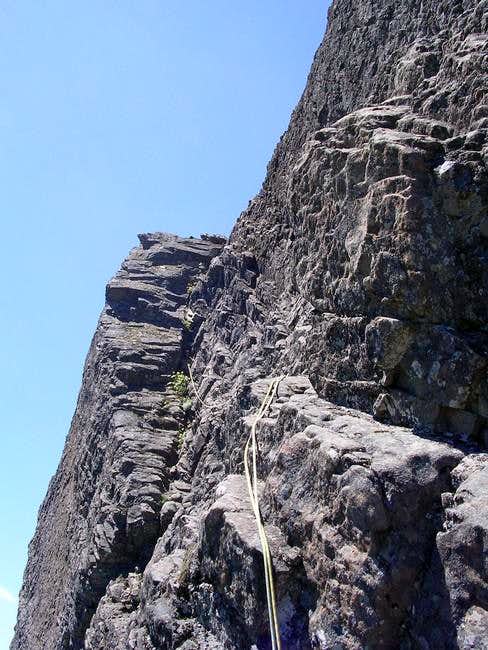 August 1 through about mid-October or as long as the road is snow-free. Typically though the road is snowed under into June and the rock is seeping water even in to August in some spots.

There is camping located on the Blue River Reservoir at the Mona Campground.

Also check here for more info on that same campground.

Probably the best place to contact about conditions and new routes here is www.climbsworegon.com

The phone number listed for the Blue River Ranger District as well as the website listed are both no longer current. Furthermore, I can't seem to find any alternative source for updated conditions.

Thanks for the heads-up. Appears the Blue River Ranger District is no longer. I found something about their buildings up for sale and according to the Willamette National Forest website, this area is now managed under the Mackenzie River Ranger District. I've updated the page and provided a link. Thanks! Brian

Nice work on the updates. Thanks! Looks like the climbsworegon site is gone too. -Adam

I called the McKenzie river ranger district earlier this week about there being seasonal closures for falcon nesting. They got back to me today saying they are unaware of any nests on the east face of Wolf Rock and that there are no seasonal closures in place at this time. They did say to let them know if we get dive bombed, since that would indicate the presence of a nest. Additionally, this doesn't mean that seasonal closures will not be present in the future.

Thanks, updated the page.