Taum Sauk Mountain is the high point of the St. Francis Mountains, Iron County and the State of Missouri. All it lacks is being the most prominent point in Missouri. This honor falls on the much shorter Mudlick Mountain to the south.

Mina Sauk Falls and beyond

The trailhead sign lists the Mina Sauk Falls as a three mile loop. I highly recommend this loop, particularly in the spring or fall. Mina Sauk Falls is the highest water fall in Missouri with a total drop of 132 feet over three distinct drops. 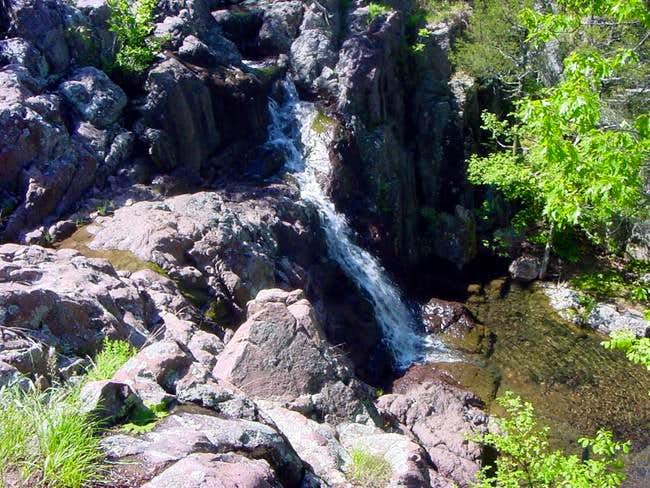 First drop of Mina Sauk Falls from the trail.

If you consider a through hike to Johnson Shut-Ins State Park you will pass through the Devil's Tollgate. 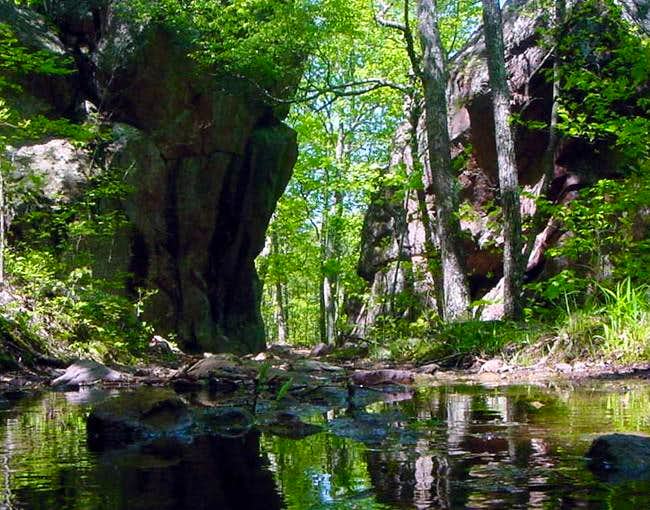 The Devil's Tollgate as seen from a low vantage point.

A Shut-In in Missouri is where a creek passes through two mountains and is shut-in by rock and forms a rocky cascade that tends to make a great swimming hole in the summer.

The Legend of Taum Sauk and Mina Sauk

According to the legend of Mina Sauk (the daughter of Chief Taum Sauk), a spring in the mountain which contributes to the flow of the falls was formed by a bolt of lightning sent by the Storm King. The chief of a hostile tribe who had made love to Mina Sauk was captured and killed and, according to the legend:

"... the young captive was thrown from ledge to ledge, being caught on the points of up-lifted spears. His grief-stricken bride, calling a curse down on her tribe, leaped from the highest ledge and was dashed to death beside the body of her slain lover. The Great Spirit invoked the Storm King, causing a cyclone to utterly destroy the people of Taum Sauk. A bolt of lightning striking the mountain top caused the stream of water to flow over the ledges into the gorge below, to wipe away the blood of the young lovers. On the banks of the stream sprang up flowers of crimson hue, which grows there today, by the overflowing water and which are known as Indian Pinks."

This information was excerpted from a book by the Missouri Department of Natural Resources titled "Geologic Wonders and Curiosities of Missouri". This is a must have book for outdoor adventurers in the Show-Me state.

Head south on State Route 21 from Arcadia, Missouri for about 4 and a half miles. Turn right onto Highway CC which is signed for Taum Sauk Mountain State Park. Along Highway CC you will see an Adopt-A-Highway sign listing the highpointers club and it's founder Jack Longacre who apparently lived in this area. After a few miles the pavement will end near a fork in the road. To the left is a lookout tower with wonderful views, to the right is Taum Sauk Mountain State Park. Once in the park there will be a viewing platform on the right side of the road that includes a panoramic photo labeling the peaks and valleys before you. At the end of the road is parking for many vehicles. I've seen as many as five different state plates - apparently highpointers - at one time.

There are no fees or permits required unless you want to camp in the park campground.

This hike is accessible year round but is best in spring and fall. Spring has flowers and peak flows for Mina Sauk Falls which is seen via a three mile loop side trip from the summit. Fall colors are beautiful in this portion of Missouri. I've been here in all four seasons and the summer can be quite hot and humid and in the winter is quite void of color. A spring or fall backpack along the Ozark Trail from Taum Sauk Mountain State Park to Johnson Shut-Ins State Park is a great escape.

Camping is allowed in Taum Sauk Mountain State Park for a fee at the park campground and is allowed in Mark Twain National Forest - below and beyond Mina Sauk Falls - for free.