If you're interested in bagging as many peaks as possible in a one-day outing, this is a good option. The Tenmile Range runs from Frisco south to the Divide passing Breckenridge and Copper ski areas along the way. This route climbs Peak 1, then traverses the other nine numbered peaks before dropping back down into the valley. Including the diminuitive Mt. Royal overlooking Frisco and the somewhat ambiguous Mt. Victoria on the northern ridge of Peak 1, you get to bag a dozen peaks in as many miles. The whole thing is around 8000' of vertical gain and 15-20 miles of hiking, depending on the exact route you take and where you manage to get picked up on the far end. Purists will argue that not all of these peaks meet the 300' saddle rule (in fact, only Peaks 2, 4, 8, 9, and 10 do so), but it's still a mighty and satisfying endeavor.

The initial four peaks (1-4) are traversed by precipitous scrambling ridges. In particular, the ridge between Peak 2 and 3 is challenging and route-finding is crucial. South of Peak 4, however, the nature of the ridge changes dramatically and all technical difficulties give way to blissful tundra hiking. Descent into Breckenridge to the east is the most logical finish, though it is possible to bail out to either east or west after Peak 4 without much difficulty.

While this route could be done in either direction, it makes far more sense to try it from north to south. In this direction, you encounter the most dangerous sections (the 3rd class scrambling) while relatively fresh. Farther south, you are presented with easier escape routes in the event of bad weather. In the early season, you can also descend on skis down Breckenridge's ski slopes if coming in from the north.

The easiest way to do this route is with two cars, however, it can be done without the car shuttle more easily than a lot of point-to-point trips. The Summit Stage provides a free way of getting from Breckenridge or Copper back to Frisco. The busses are free and run roughly every half hour and run until midnight or later, even in the summer.

Royal Trailhead: The trailhead in Frisco at the northern end is easy to find being just off I-70 exit 201 (western end of Frisco immediately before westbound traffic enters the narrow canyon between the Tenmile and Gore ranges).

Breckenridge Access: Assuming you hike out to the east after finishing the ridge, there are several access points in Breckenridge. The Burro Trailhead at the base of the Peak 9 section of the ski area is the official trailhead. However, it is possible to drive quite a distance up Village Road (CR750) to the Peak 9 Restuarant at the top of the lift of the same name (elevation 11,400'). The road is dirt, but should be passable for almost any vehicle. It will save you a great deal of walking and elevation loss at the end of a long day.

Copper Access: Bailing to the west and ending up at Copper Mountain is somewhat less optimal than ending at Breckenridge on the East, but it is feasible. The Miners Creek Trail intersects the ridge between Peaks 5 and 6 and traverses southwest. The Wheeler Trail (a segment of the Colorado Trail) crosses between Peaks 8 and 9 and intersects the Miners Creek Trail west of the range. This trail descends to the northwest and eventually gets to Copper Village. The Wheeler Flats TH at I70 exit 195 is the closest access point.

Bike Shuttle: It is also possible to use a bike shuttle on this route. A popular and paved bike path runs parallel to the main roads from Breckenridge to Frisco to Copper (and all the way to Vail if you're feeling spunky).

From the Royal Trailhead in Frisco, cross a well-maintained bridge and turn left on the paved bike path. Enjoy it, since this is the last level ground you'll see for quite some time. After half a mile, bear right following signs for Mt. Royal and Masontown. This trail gains altitude quickly and brings you to the saddle south of Mt. Royal's impressive viewpoint. Hike south on exposed bluffs for 1/8th of a mile to the summit.

From the Mt. Royal saddle, either bushwhack directly up the ridge to regain the trail, or descend a few hundred feet and take the established trail as it switchbacks back up to the ridge. From here on, the trail is faint, but quite followable. Hike through thinning bristlecone pines and pass a radio installation on a rocky knob. Mt. Victoria is a small rocky knob a few hundred yards farther up the slope with fantastic views of Peak 1. The final ridge climb to Peak 1 gives you a preview of what is to come. Scramble on talus to the great summit.

Peaks 1-4 are traversed via 3rd-class scrambling. The 1-2 ridge is moderate and will ease you into the terrain. From the summit of Tenmile Peak (aka Peak 2), you can see the rest of the route.

The 2-3 ridge is the crux of the route. Cross from Tenmile Peak to a sub-summit (Peak 2.5?) on easy ridge. From here, drop steeply down to a large, light-colored fin called the Dragon. Under the Dragon's snout, descend west (right) along ramps and scree, scrambling back up when you can. Heading left at the Dragon gets you into some exciting low-5th class terrain. Solid, but exposed. Ascend to the remote summit of Peak 3. The worst is behind you.

The ridge from Peaks 3 to 4 is wonderful, solid, airy, exposed scrambling, often on sharp knife-edges and narrow catwalks. It is usually easiest to stick directly on the ridge, but those with less stomache for exposure can descend to the right.

From Peak 4 onward, the going is easy. Peak 5 is a long, undulating ridge of gentle tundra with great views in all directions. Peak 6 is a preview of the rest of the trek as you descend to a small saddle, then regain a few hundred feet up grass and small stones.

Descend to the low saddle after Peak 6 and contemplate the climb ahead of you. Peaks 7 and 8 are close together but represent a climb of almost 900' in about a mile. You're also within the ski area boundary here and there are quite a lot of antenae, signs, and other detritis along this portion of the ridge. The Imperial Express Superchair tops out a few hundred feet below the rockpile summit of Peak 8 and represents the highest ski lift in North America (at least for now). Descend from Peak 8 along a long ridge past five enigmatic plywood "hang gliders" of unknown purpose poised over some winter chutes.

Peak 9 is devious and may sap your will to continue. The climb from the saddle is a lot longer and steeper than it looks from below (786' in 3/4 of a mile) and involves several false-summits and a short bit of ridge scrambling. You're above 13,000' for the first time today. Almost done!

Peak 10 is big and you're probably pretty tired by now. Gird your loins however you see fit, then descend the mercifully gentle slope south of Peak 9 and concider your options. The talus slope on the north face of Peak 10 is climbable, but very steep and unappealing. An easier, though longer option is to cut south east and intersect the 4x4 road leading to Peak 10's east ridge and a microwave facility. From the ridge, it is an easy couple hundred feet to the summit and the last of your 12 peaks.

Descend the ridge and road back into the valley between Peaks 9 and 10. The road winds down interminably to the top of the ski runs. If you've parked a car at the Peak 9 restuarant, you've got about two miles of hiking from the summit of Peak 10. If you haven't, you've got around five miles of hiking and 4000' of descent down ski slopes or road to the center of Breckenridge and the shuttle bus. Have fun with that.

Elevation-time profile for the Tenmile Traverse.

If you're more macho than I and still have energy left after 8000' of climbing, here are some options to help you earn your refreshments.

Crystal Lakes Finish: From the summit of Peak 10, continue south-west along the ridge toward Crystal Peak. From the saddle, descend east to the well-trodden trail coming up the valley toward Upper Crystal Lake. Follow the trail out past Francie's Cabin to the Spruce Creek TH. Actually, this wouldn't be significantly harder than the standard descent and probably a good deal more scenic.

Helen Wheels Finish: Continue to Crystal Peak from Peak 10, then descend to Father Dyer Peak and cross the 3rd-class ridge to Mt. Helen. Descend the broad eastern slopes to the Spruce Creek Road and TH.

Ultra-Glutton Finish: After continuing to Crystal Peak, descend the southwest ridge and ascend to Pacific Peak. Descend east to Spruce Creek or McCullough Gulch Trailheads. In the unlikely event you're looking for even more abuse, continue to Atlantic and descend the West Ridge route to Mayflower Gulch.

Need I continue? I didn't think so :)

In summer, nothing beyond simple hiking gear is required. A winter traverse would be exciting as the trail crosses numerous avalanche paths and exposed, cornice-encrusted ridges. A ski descent is possible into Breckenridge anywhere from Peak 6 onward. Note, it is illegal to cross ski area boundaries in the winter in either direction. Caveat empor. 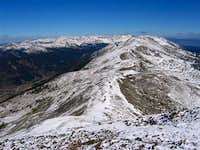 Looking north from Peak 8 in the early fall.

Here's my trip report from a late-July traverse: Steeper by the Dozen