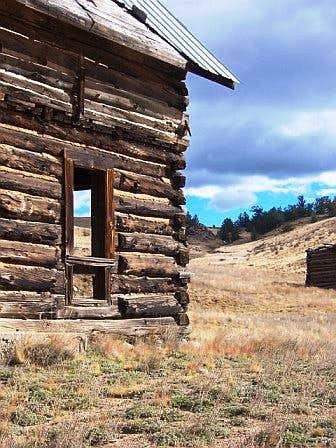 Bordered on the north by Kenosha Pass, Hwy 24 on the south, the Lost Creek Wilderness to the east and CR 15 to the west, the Tarryall is a very special place to those who know it well. This is a land of warm, soft beauty, not striking alpine contrast. This area reveals its secrets slowly and cautiously, and the best elements of the Tarryall are reserved for the patient and diligent explorer.

The Tarryall is cut roughly two-thirds, one-third by the Tarryall Creek and Park County 77 which parallels the waterway. The eastern third contains parts of the Tarryall Mountains. The Puma Hills run down the center in the southern end of the region. The western two-thirds consists of rolling hills and rugged outcrops gradually rolling down into South Park. 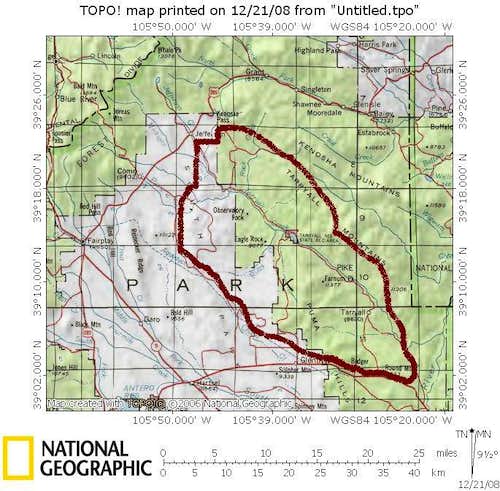 Map of the Tarryall area

In addition to long, peaceful hiking trails and trail-less summits, the area is well-known for its fly fishing along the Tarryall Creek. Additionally, ORV enthusiasts enjoy the web of old mining, logging and ranching roads while others relax and fish from the cool waters of the Tarryall Reservoir. 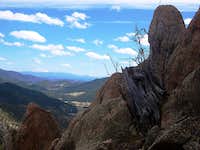 Southeast down the Tarryall Valley from the Sugarloaf Summit.

The Tarryall Creek flows like a lifeline through the area. The creek starts in the high country, just below the Continental Divide on the slopes of Mount Silverheels, running about 25 miles until meeting up with the South Platte. The Tarryall Creek apparently offers fine fly fishing, though public access can be an issue as much of the riparian habitat is privately owned, barring public access to the waterway.

The Tarryall Reservoir, located in the Tarryall State Wildlife Area, is a popular place for fishing, boating, camping, beer-drinking and just plain relaxing. While the banks of the Tarryall Reservoir can get a bit roudy with revelers during warm weather, the winter months bring more quiet, with ice-fishing rigs dotting the lake ice. At approximately 180 acres, it is a small reservoir but provides for scenic mountains-over-water vistas and, I’m told, decent fishing. The Tarryall Reservoir was drained in 2002 for damn repair and remained empty for two years during repairs. The Reservoir was on its way to refilling in 2005 and today is back to normal stage. 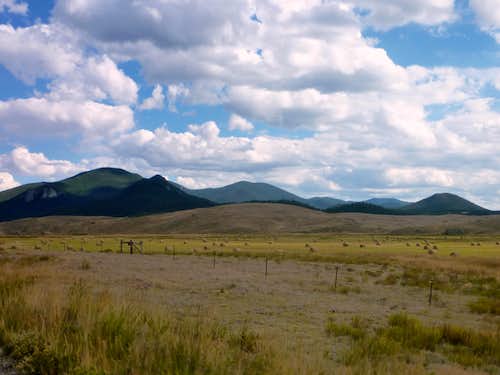 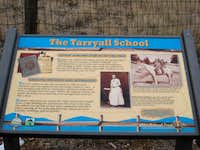 Though I can find little information in Native American culture in the area prior to European settlement, surely the Ute Indians and others hunted in the rich Tarryall Valley. In 1859, miners came to the in search of gold, but the region did not yield the riches found in other Colorado mountains. Farmers and ranchers followed the miners, and several ranching families to this day make a living running cattle in this area.

Today, a variety of solid, salt-of-the-earth folks call the Tarryall home year round. Numerous others, myself included, have a vacation home in the region for weekend relaxation and outdoor adventure. 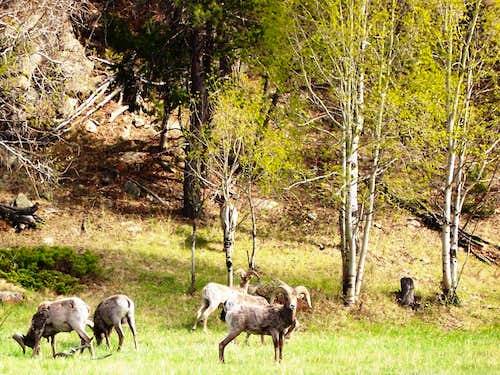 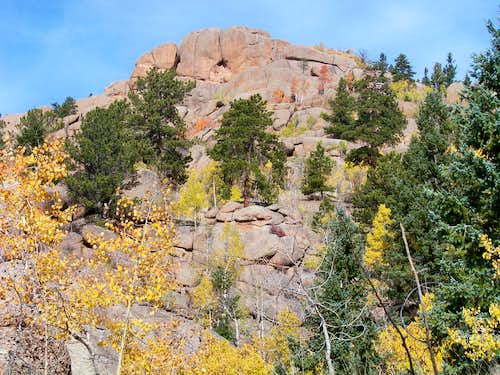 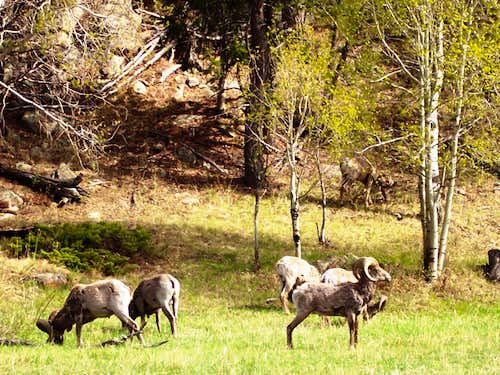 The summits in this area are, as a whole, lower than the high country peaks across South Park. They tend to be scrappy and offer nice, if short, summit scrambles and are free from the burden of trails to their summit. Tarryall summit registers see relatively few signatures.

Plenty of camping can be found along Park County 77 and spur roads off of it. In the case of rustic 4x4 campsites, remember to bring plenty of water, bury human waste and pack out what you packed in. 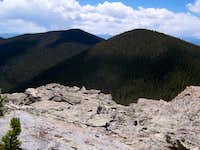 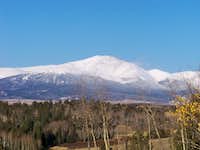 North end of Hwy 77
Plenty of camping can be found along Park County 77 and spur roads off of it. In the case of rustic 4x4 campsites, remember to bring plenty of water, bury human waste and pack out what you packed in. 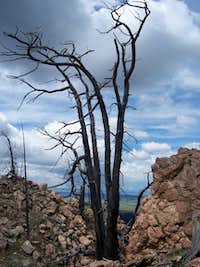 Charred Sentinel near the summit of "Burntop".

The eastern third of the Tarryall is publically owned and lies within the Pike National forest. The estern two-thirds is a patchwork of privately ownership, National Forest, BLM, State Trust lands and State Wildlife Areas. This patchwork of ownership can make access a challenge. Please respect private property rights and beware of (and follow) use regulations governing the public lands you visit. 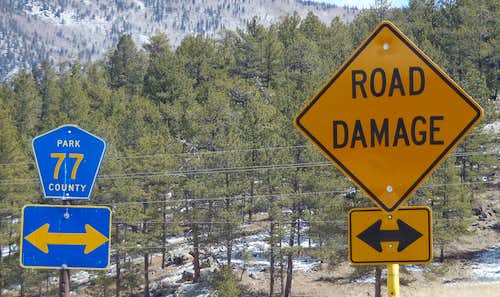 A picture says a thousand words 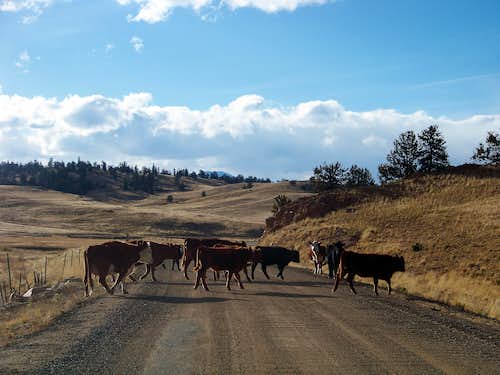 The summers in the Tarryall are pleasant by the standards of the bulk of the Colorado population that resides in Front Range metropolitan areas like Ft. Collins, Boulder, Denver, Colorado Springs and Pueblo. Still, on the hottest days of the year the heat here will be much more oppressive than in the high country. 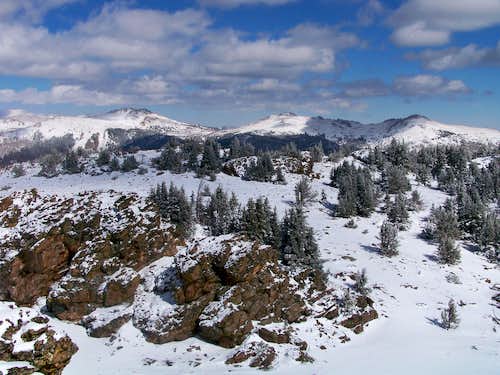 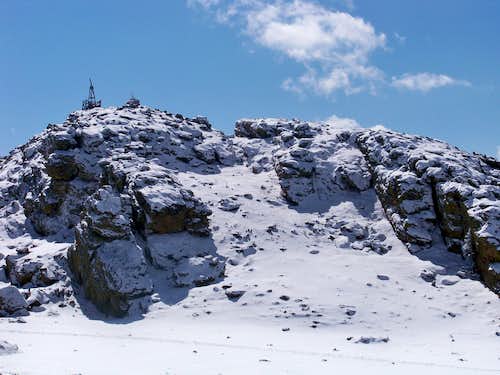 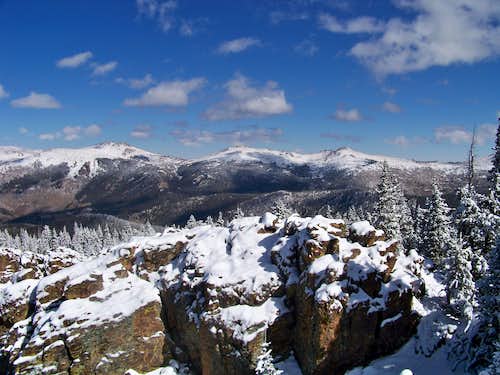 Snowseason is a magical time in the Tarryall. Click on images to enlarge. 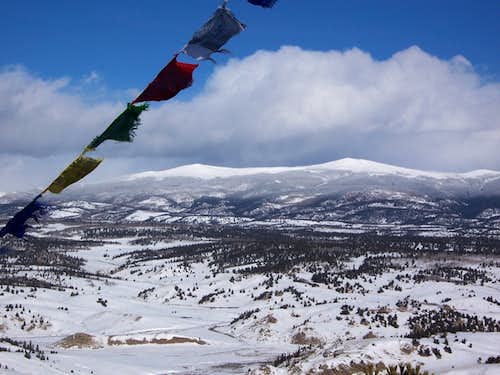 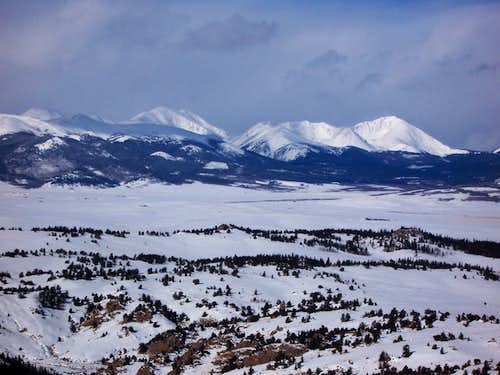 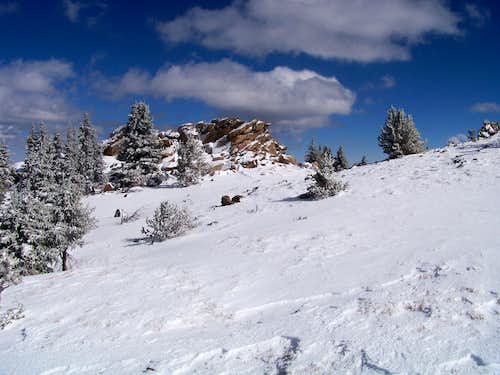 Park County 77 is the main thoroughfare serving this area. While the road is in bad shape (full of potholes) south of Stagestop Road, it is open year-round. Note that shaded areas of this road can be quite icy in snow season. Due to seasonal closures of Forest Service Roads, not all parts of the Tarryall are accessible in the winter, depending on snow pack. The access roads in this area melt out earlier and get snowed-in later than many higher-altitude, heavier-snowpack climbing areas in Colorado. Nonetheless, during snow season many mountains in the Tarryall are accessible only to the intrepid winter hiker looking for a multi-day outing or to those willing to opt for a snow-machine assisted approach.

Sarah - since you've added more peaks in this nice area, this page is ready for you to add them here, too! :)

Good point, thanks Jeremy. I'll update the table, etc. Are there any peaks in particular you're thinking of that aren't attached? This would be a great help for me. Sarah