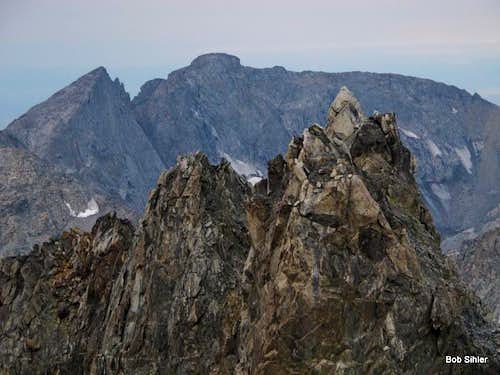 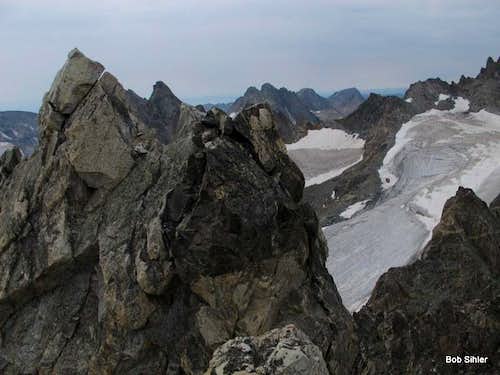 No, I am not vainly naming these peaks for myself or claiming ownership of them!  (And if I were, you would know it because I would disregard the ridiculous USGS practice of not using apostrophes.)

First climbed by Robert L.M. Underhill and his wife, Miriam O’Brien (the namesake for Miriam Peak, the next summit to the east), in August 1939, Bobs Towers, on the Continental Divide between Mount Woodrow Wilson and Miriam Peak, probably do not receive many ascents.  The lack of a register or a summit cairn on the highpoint seems to testify to that, though, to be fair, there really is not room for either there.  But unlike California’s Bear Creek Spire, where there is a register at the base of the summit block, the highest of Bobs Towers has no register at the base of its summit block.

Speaking of Bear Creek Spire and its summit block, I have to note that the summit block of Bobs Towers is likewise small, pointed, and sickeningly exposed.  There is only room for one person on the actual highpoint of the block, and all but the absolute bravest or craziest are going to straddle it rather than stand on it (warning to male climbers-- know the location of your valuables before you do this!).  Both summit blocks are Class 4, but while reaching the BCS block can be kept at Class 4, reaching the Bobs Towers block requires a short Class 5 pitch that I would put at 5.2-5.4.  While exposed, that pitch is fortunately not above the worst of the exposure on the summit block.

Kelsey lists the peaks as being 5.x, whatever that means.

Why the claimed connection between peaks about 1000 miles apart?  Simple-- I climbed both the same summer; freshness matters.

If, like me, you take little interest in mountaineering history and the names associated with it, you would benefit (and perhaps feel a little chastened for your ignorance) from a quick read of the Wikipedia page for Underhill, which will give a sense of his achievements.  In short, though, he is credited with introducing modern alpine rope and belaying techniques, and he joined up with many a fellow now-famous climber to complete numerous first ascents in the Alps, the Tetons, and the Sierra Nevada.

Maybe surprising, though, is the fact that Underhill’s name is not all over the maps and guidebooks the way those of some of his contemporaries are.  In addition to Bobs Towers being named for him, all I can find also named for him is the Underhill Couloir, which is above the Palisade Glacier in the Sierra Nevada and was part of the route he and his partners used for the first ascent of Thunderbolt Peak (then unnamed, later named as it is now because of Jules Eichorn’s very close call with lightning).

Annually, the American Alpine Club bestows the Robert and Miriam Underhill Award "to a person who, in the opinion of the selection committee, has demonstrated the highest level of skill in the mountaineering arts and who, through the application of this skill, courage, and perseverance, has achieved outstanding success in the various fields of mountaineering endeavor." 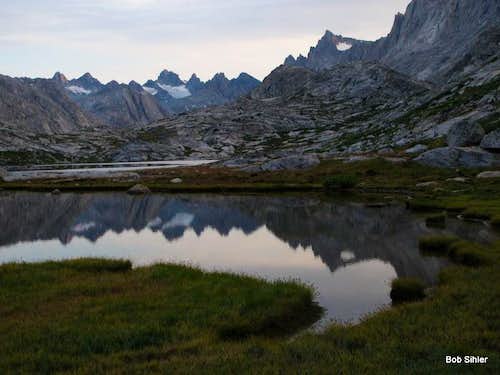 Start from Elkhart Park, about 9400', and hike 10.5 mi to Island Lake, about 10,400'. While this sounds like one of the world's easiest backpacking approaches, it is more strenuous than it sounds, for the route does not ascend a drainage or other naturally ascending line but rather has several dips and reclimbs that make the total elevation gain closer to 2000' (still not that bad but frustrating nevertheless). And the first 5 miles are almost exclusively extremely dull hiking through lodgepole pine forest with no views of anything except more lodgepole pines.
Although there are several trail junctions along the way, with a good map and decent reading comprehension, you will not have trouble following the correct route.
Where you camp is up to you based on your itinerary. Island Lake makes a good base camp because routes to Titcomb Basin, Indian Basin, and other areas nearby all branch out from it. If you don't camp at Island Lake and if Titcomb Basin is your primary destination, then consider the extra hike into the basin to set up camp. However, be aware that finding good legal campsites in lower Titcomb Basin is tricky because you are required to camp at least 200' from lakes. Also, there is very little shelter in Titcomb Basin, and wood fires are not allowed.
This route description starts from Island Lake where the trail drops down and reaches the shore there. RT distance from this point is about 15 miles with approximately 2700-3100' of elevation gain, depending on the exact route. Almost all of the day will be above timberline, so keep that in mind as you watch the weather.
From Island Lake, hike another mile to a signed junction. In August 2012, the sign indicated Indian Pass was 6 miles along the right fork (seems a bit too long, though). You want to go left, immediately crossing the stream draining Indian Basin and shortly thereafter entering famous and spectacular Titcomb Basin. 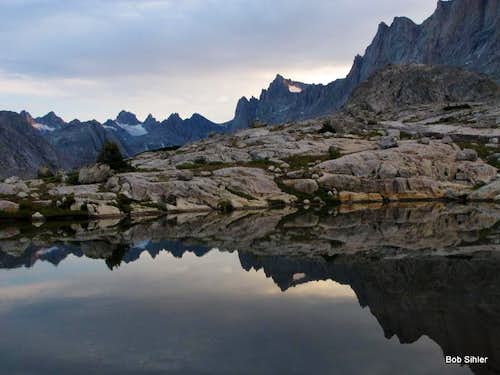 Twin Peaks, Mount Woodrow Wilson, Sphinx, Bobs Towers, Miriam Peak, Bonney Pass, Mount Helen, Mount Sacagawea
A good trail leads about three miles along the eastern sides of the three main lakes of Titcomb Basin, gaining little elevation as it does so. Beyond the last lake, the trail starts to fade.  Although it reappears at times and there are sometimes cairns marking the way, neither the trail nor the cairns are really necessary. Whenever possible, though, use existing trails or go over bare rock to minimize impact on the fragile tundra ecosystem out here. 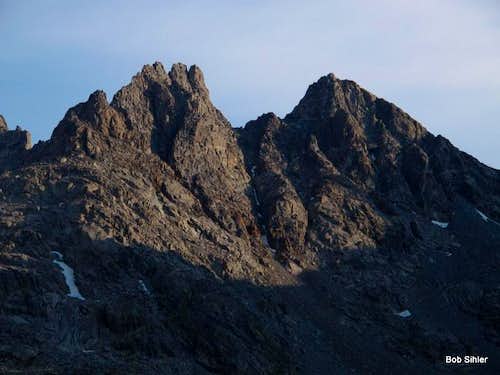 If you only intend to climb Bobs Towers this day, then this is the way you want to go.  Disclosure: I only scouted this route from the approach and read a so-so description of it, so I do not know how difficult it really is.  It is obvious that there is at least Class 3 terrain.
Leave the basin and ascend to the left in the area seen below. 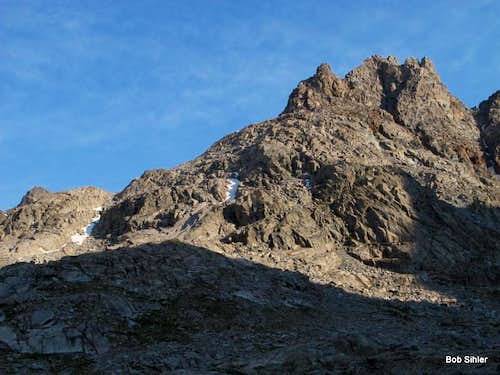 Seen from Titcomb Basin.  Although I climbed them from Bonney Pass (to the right, not visible here), another way to access the peaks is to ascend left below the base as seen here and approach them from the west.
Gain the ridge west of the peaks from either the west or southwest and then finish the approach to the peaks.

It is 3-3.5 mi from the head of the upper lake to Bonney Pass.  Elevation gain is 2200', a moderate grade overall, but be aware that the last mile gains about 1400'. Even though it is just a hike up talus, it is very steep, and when you consider that climbing Gannett Peak from Titcomb Basin typically means a summit day including this pass and a descent of over 1000' from it and then dealing with it all over again on the return, you understand why many climbers choose to approach via the Glacier Trail even though that way is longer. Anyway, as you get closer to the pass, a more defined use trail does develop, but I am not so sure it is worth using; the footing is really loose much of the way, and larger rocks and slabs nearby offer better purchase. The use trails do speed things up on the way down, though.
Hike west from Bonney Pass, gaining about 200', to the summit of Miriam Peak.  The summit block itself is rated Class 4, but I think it feels more like an exposed Class 3, with the exposure accounting for the higher rating even though it shouldn't.
Now the fun begins. 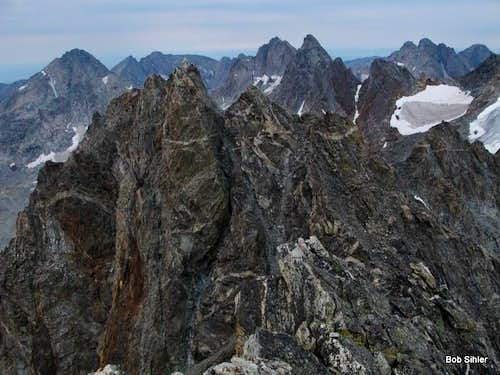 Bobs Towers are the peaks in the foreground.
Via steep, loose gullies, you can descend to the notch between Miriam Peak and Bobs Towers (Class 3 at the most), or (highly recommended) you can keep to the ridge, sometimes loose, always narrow, and often exposed (this way is Class 4). 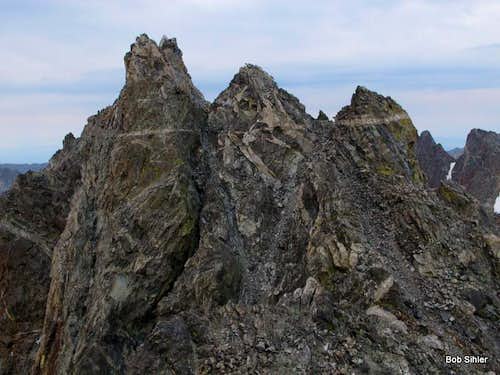 Seen from the ridge between Bobs Towers and Miriam Peak. The highpoint is to the left, though not the peak furthest to the left. In this view, it is just visible just to the right of the peak furthest left.
From the notch, ascend to the towers.  In Guide to the Wyoming Mountains and Wilderness Areas, Orrin Bonney mentions four principal towers, but there are two lower pinnacles behind the main group that are also worthy objectives.  In fact, I think the lowest of them might be the most difficult of them all.
From the north side of the towers, there is a good view of the two highest ones. The one on the left is Class 4 and the one to its right, which is the highpoint, is Class 5. See the photos and captions below for all relevant information. 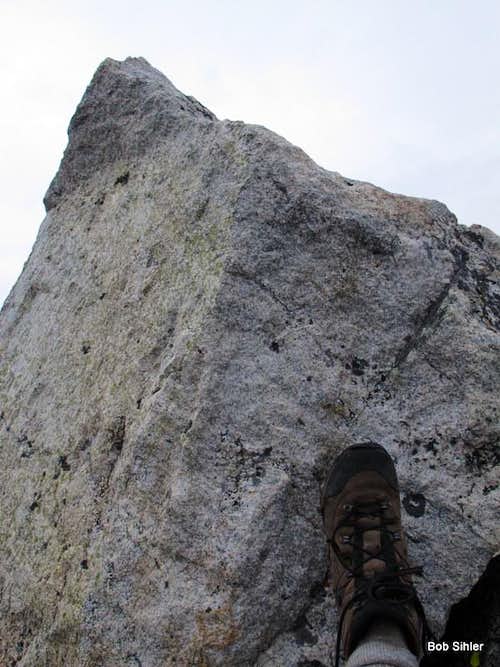 I took this ridiculous picture to give viewers a sense of the size and exposure of the summit block. 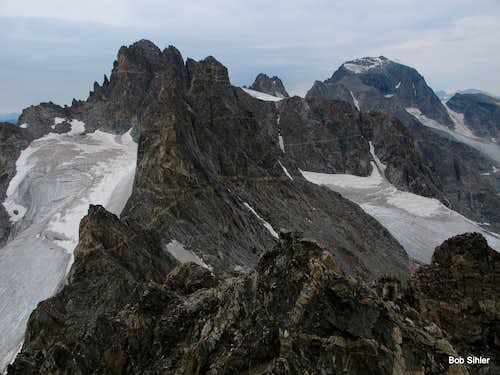 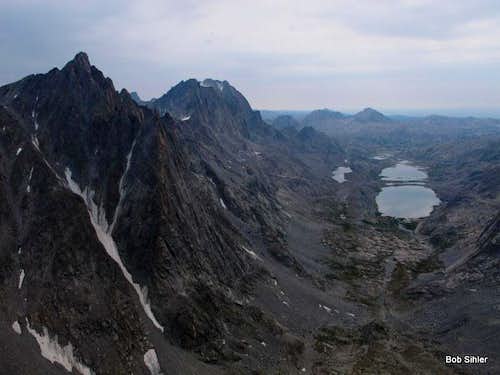 Just read posted wilderness regulations, especially regarding campsites and fires.
Technically, this part of the Winds is grizzly country again, but I'm not sure if any have been seen in this area. If any have been, it has been exceedingly rarely.

Summer is best.  During winter, you can get to about three miles from the trailhead.

There is a campground by the trailhead if you arrive too late in the day to start heading in. Otherwise, backcountry camping is in order.